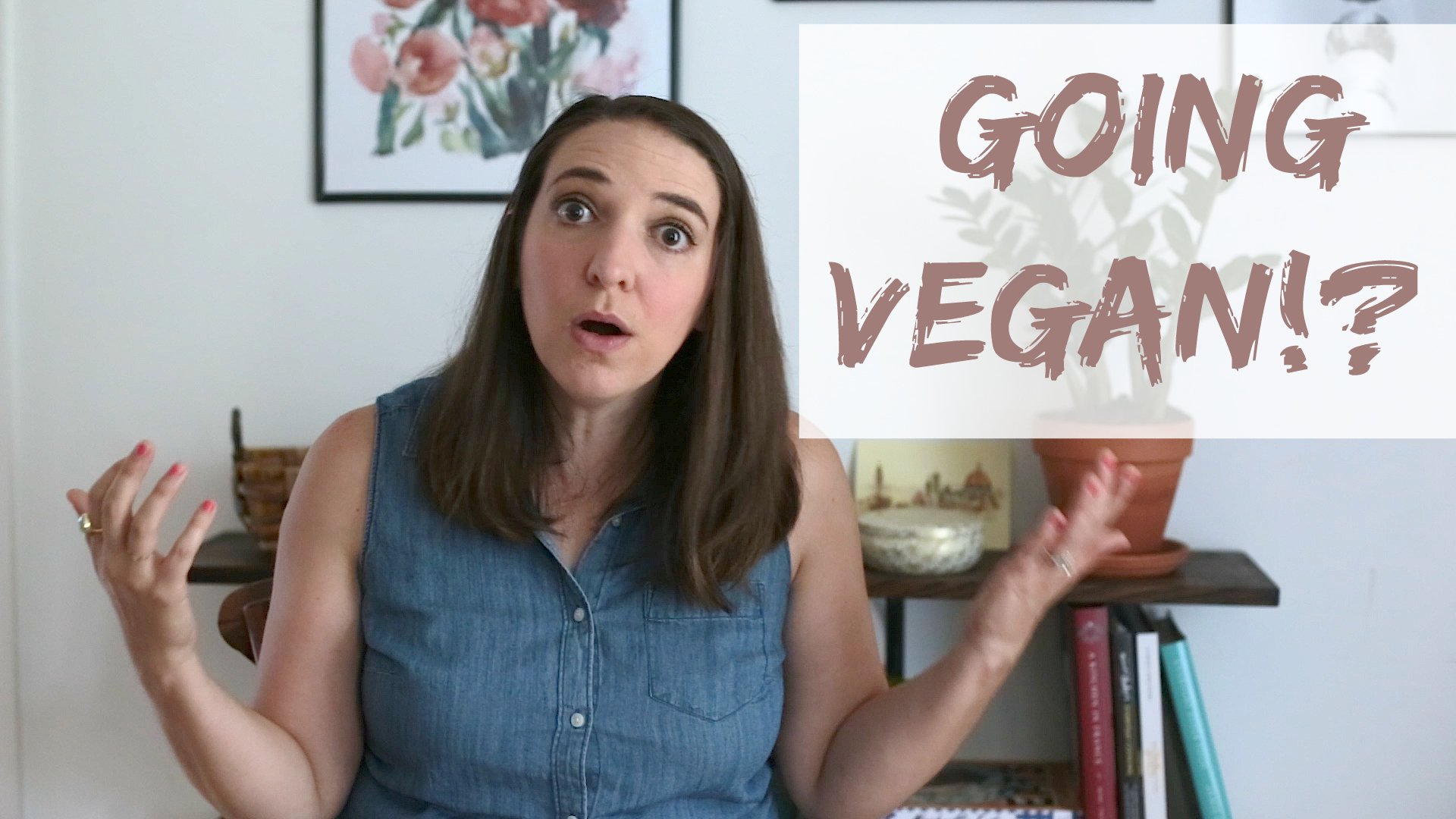 Can we first take a moment to mutually acknowledge how ridiculous that image is?? ☝︎☝︎☝︎☝︎

You may have noticed lots of vegan recipes on my blog lately. In fact, ALL of the recipes that I have posted over the past few months have been vegan. Before that, however, there were lots of non-vegan recipes so I think that there might be a lot of people out there that are confused.

In fact! I made a video explaining it all. Here it is in all its shaky voice nervous glory:

Because I was nervous, I inadvertently left a lot out that I really wanted to say. So, I’m going to share a bit more here.

The short answer is no. The long answer (which I’ll get into) is that I’m working towards consuming a mostly plant based diet with the addition of eggs (because I have backyard chickens that I love and who give me eggs daily) and honey.

There are a lot of different labels out there these days when it comes to diets…paleo, vegan, plant based, etc. My ultimate goal is to avoid labels and live the life (and eat the food) that I see best. For me in this very moment of time (which is August 2, 2016) that means a meat free and mostly dairy free diet that’s filled with LOTS of veggies and fruit including tons of potatoes and rice. I would like to cut dairy out from my diet completely but as someone who has consumed lots of dairy in my 29 years on this Earth, I’m taking it slow and cutting it out in stages.

Cheese is what I have found to be the absolute hardest part. In some way, shape, or form, I used to consume at least a little cheese at every single meal. Hence, cheese has been the hardest thing to cut out of my diet. But, I’m getting there. At this point, I’m mostly reserving my cheese consumption for when we’re out to eat which isn’t super often these days.

Going vegetarian is something that it seems a lot of people can understand. I’m not saying that they agree with it but they can at least understand it. Cutting out dairy and other animal products, however, seems to be a lot more confusing to many people.

It’s quite simple to me: impregnating a cow (or goat etc), taking it’s baby away, and then consuming the milk that is custom designed to fatten up a baby calf is SO WEIRD. Kind of off topic- I find it interesting that we as a species are totally fine drinking milk from other species but if a woman were to hand you her breast milk, very few would even consider drinking it. Not to mention the fact that our bodies really just aren’t made for milk consumption past childhood.

Ethics, science, and everything else aside, my body simply functions better when not consuming dairy. My acne 99% cleared up after just 2 weeks (mostly) off of dairy and I stopped getting that weird congestion in my throat when I would eat/ drink dairy. The acne thing alone is enough to make me quit because at almost 30, I do not have time to be dealing with zits!

I think that this is the biggest question that people seem to have. I was raised in a traditional southern household where meat was served at every. single. meal. If it didn’t have meat, it was just a snack.

That being said, I’ve always been a softy and even from a young age felt weird eating meat. I kind of grew out of that as I got older. Then I started thinking about it again in college and tried going vegetarian then but it only lasted a couple months (at most!). Part of that is due to the fact that I knew nothing about proper nutrition and my only means of food was whatever I could get in the student center and/ or whatever I could make in a microwave.

Flash forward to today. I can’t really tell you why NOW or what made me start to think about all of this more now HOWEVER I kind of just fell into a rabbit hole of research and discovery when it comes to the meat and dairy industry. I’m not really sure that it’s something I want to dive into in this post. What I will say is that I do not buy into the popularly accepted notion that god put animals on this Earth for our consumption. I also do not believe that our bodies are made for meat consumption or that we are natural born meat eaters.

Now, I’m obviously no scientist or doctor. I’ll be the first person to admit that I could be terribly wrong about all of this. However, I’ve been reading and researching all of this SO much. I’m not just watching Forks Over Knives and taking it 100% to heart. There have been a lot of great documentaries that I found very enlightening but I made sure to do lots of research on what was presented as opposed to just taking it all as fact. <<<<FYI.

What you can expect to see from my blog moving forward…

Moving forward, you can expect to see mostly vegan recipes on my blog with a few egg recipes here and there (psst- I have an AMAZING recipe coming tomorrow or possibly next week with eggs in it!).

Just the other day I shared a recipe video on my facebook page. It was a video made by a couple that I met last year at a conference whos blog is amazing and who are just genuinely sweet people. I was excited to share their video and support their blog just as they have shared my content many times. It was meat free but did have goat cheese in it. Boy did I get some not-nice comments from people who were made that I was “promoting animal cruelty” by sharing a video with cheese in it. Sigh.

So, moving forward, I’m going to make it well known on my blog and on my social media that my blog is not a fully vegan blog. Again, if you have questions about that or want to chat about it at all, please shoot me an email and I’d be happy to talk about it. :D

The hardest part about all of this, which I totally didn’t expect, is how incredibly confused and concerned this lifestyle change has made some people. This has been very….hard for me.

To help out some of the people who are concerned I’m not getting enough protein or who think that my diet is so extremely unhealthy, I went to a doctor recently, had blood tests done, AND talked to a nutritionist. After 3 months of no meat and very little dairy, my blood tests showed that I am extremely healthy. I was VERY slightly deficient in Vitamin D which apparently is very common and which my doctor told me could be solved by simply getting out in the sun a bit more. (yay!).

My doctor explained that she has many vegetarian patients and that it is not something that concerns her one bit. She also went on about some science stuff and about how our bodies can VERY easily get the protein it needs without consuming meat. I didn’t fully understand it all but it made me feel better that my healthcare professional was not at all worried. whew!

Despite that, I still have people who act as if they’re disgusted with my choices. Please know that I am not and NEVER plan to be one of those crazy, in your face, vegan types. I will never do that. But the way that some people are reacting is as if I told them I was going on a strict diet of pizza and beer (which I’m sure no one will dispute is pretty unhealthy). It’s confusing to me how eating a TON of healthy and natural foods in so looked down upon by some people. <<<<sorry, just needed to get that off of my chest.

So, just for the record, please don’t think that just because I’m not eating meat that I’m sitting around and judging those that do. NOT AT ALL! I promise :) We all make choices for our lives based on what we think is best and I am 100% respectful of that. But, if you ever do want to ask me questions or talk about it, that’s cool too :)

I hope this clears some questions up for you. I also hope that you’re EXCITED about all of the great recipes coming your way because I have NEVER been more passionate about the food and the recipes that I’m sharing on my blog than I am now.

Don’t forget to leave a comment or shoot me an email if you have any questions or just want to say something :)

OH and will you pretty pretty PLEASE subscribe to my Youtube channel?? You can do so HERE.