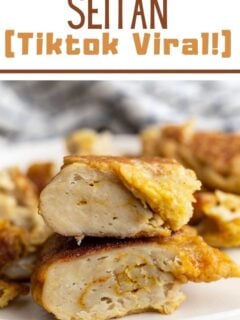 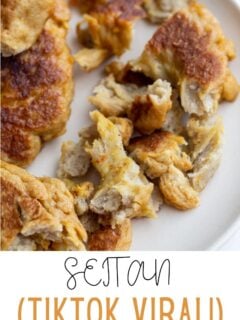 Making Seitan at home is SO simple and makes for a delicious and versatile meat substitute! It’s high in protein and can be used in so many delicious dishes. I can’t wait for you all to try this one!

I can’t tell you HOW excited I was to se homemade Seitan blowing UP on tiktok over the past week. It’s most certainly not a new recipe (it’s been around for many centuries) but I’m thrilled to see more people trying it.

I have a good friend who swears by seitan and bugged me to finally try it for quite a few years before I finally gave in. My first introduction to it was a store bought seitan but I was thrilled to see how easy it is to make at home as well.

Seitan is often referred to as “wheat meat” since it’s a meat substitute that is made out of wheat. Fun, huh?

It is a chicken/ meat like substance that is made by washing flour to remove the starch graduals, leaving behind a high concentration of PROTEIN. As such, used in many ways to make different kinds of vegan meats. It’s very versatile and takes on the flavor of whatever it’s mixed with (seasonings, broth, soy sauce, etc).

BUT FIRST! Let’s go over something:

If you’re here because you saw the video of flour being washed in water then you’re only KIND OF in the right place. Let’s break this down.

My video and THIS RECIPE that I’m sharing use VITAL WHEAT GLUTEN. This is essentially flour that has ALREADY been washed. So, it contains 70-80% protein already. As a result, when you’re using vital wheat gluten, you DO NOT need to wash the dough as you’re making your seitan.

What is Seitan made of?

As mentioned, Seitan is made of vital wheat gluten, flour, and water and then boiled in broth. To give the seitan some flavor, spices and other seasonings are added depending on how you’re going to serve it. It’s very versatile and can take on many different flavors!

There are TWO things that people immediately want to know when it comes to the nutritional info of seitan: how much protein and how many carbs. Let’s quickly break this down (more nutritional info below in the recipe card!):

These numbers are based on my recipes that makes 2 large servings. Imagine 2 large chicken breasts and that’s about the equivalent here.

Seitan protein: 1 serving (half of the recipe written below) has 47.8g of protein

Seitan carbs: 1 serving (half of the recipe written below) has 26.7 total carbohydrates

See my video on how to make Seitan:

This Seitan is very simple to make and a delicious and nutritious meat substitute!

To freeze: I suggest going ahead and shredding/ cutting it into strips before freezing and do not do this in the liquid at all.