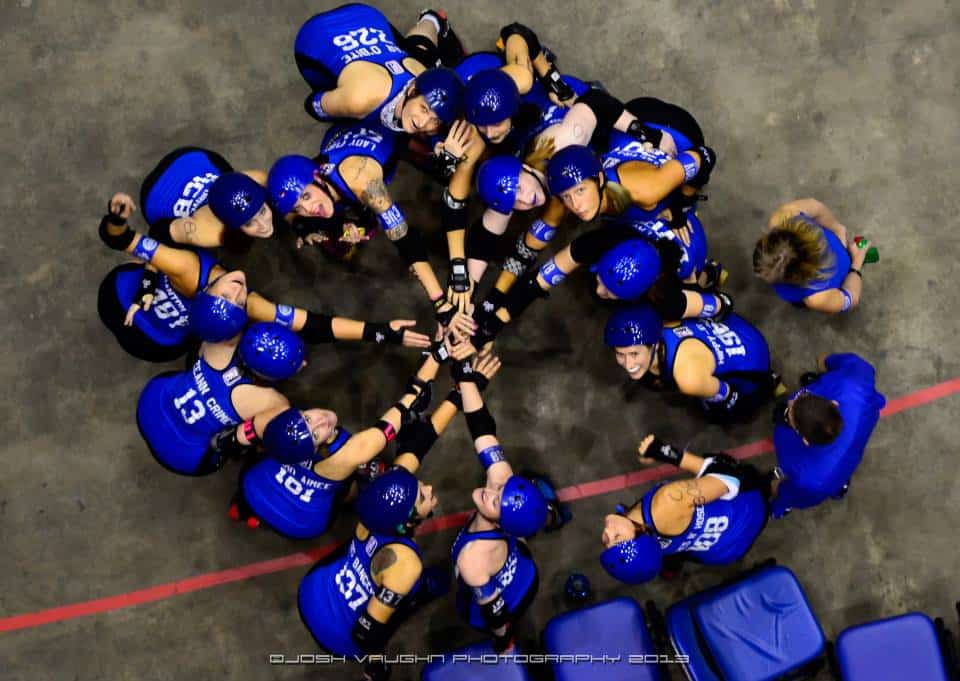 So, if you’ve been around since the beginning, you will have heard me mention roller derby a few times. I’ve actually refrained from talking about it half as much as I’m inclined to. It’s a huge part of my life right now so naturally, it’s always on my mind.

When my husband and I were dating he was working as an EMT. Every once in a while he would pick up extra shifts working special events. After being called in to EMT a few roller derby games (called bouts), he was hooked and became a mega fan. So, naturally, he took me to a bout on one of our first dates. At the time I was big into crossfit and have always had a pretty competitive spirit. Within no time, I was going to my first “Derby 101” in hopes of being on the team.

I walked in feeling WAY more confident than I should have. I thought “I’m fit, I work out a lot, I’ll pick this up in NO time!”. Boy was I wrong. Being fit meant nothing if I didn’t know how to skate. The first time I showed up, I was scared to even stand up. I spent 20 minutes pretending to tie my laces just so I didn’t have to get up and make a fool out of myself.

At the time, all new skaters went through a six week training course before taking a test which would determine if you were ready to join the team (think tryouts). Of all the girls taking the test with me, I was by far the worst! Part of the test included doing 25 laps around the track in a 5 minute period. Most of the others were able to do this within a couple weeks of starting our training program. I, on the other hand, didn’t do all the laps in the allotted time until the very day of the test. So yea, all traces of cockiness were wiped right out of me.

I didn’t pass the test that first time but I nailed it the second go round! In October of 2010 I became an official member of the Nashville Rollergirls. What a happy day that was.

Since then I’ve gotten more and more engulfed in the league. I now serve as President of the league and skated this past season as a member of the Music City All Stars team. And let me tell you, I’ve loved every minute of it. The competition, the sport, the hard work, and especially the family. It’s like having a giant group of sisters (that you love but also want to strangle at times :)) that you can count on when you need ANYTHING. If I’m ever in trouble (like, I had a few too many and shouldn’t drive or I’m taking a last minute trip and I need a dog sitter) I have a big group of people that I know I can always count on.

We’ve been in the off season for the past month but this week things are really starting to kick back up. I figured now was a good time for this post because for the rest of the year (until at least September), I’m not going to be able to refrain from talking and blogging about roller derby any longer. Sorry, it’s going to happen.

And while we’re on the topic, YES, roller derby is a real sport. NO, it is NOT rehearsed or fake in any way. YES, we work crazy hard (practice for 2 hours 3-4 times a week at least, run the whole business side of everything ourselves, and workout together 1-3 times a week). YES we’re all a little crazy and obsessed with the sport and if you don’t want to get an ear full about it and be constantly bugged to come watch, then don’t ask about it (but, definitely DO ask about it).

While I had planned to write more about the topic today, this post is crazy long already and if you’re even still reading, bad props to you. I think I’ll save the “So, what the heck IS roller derby?” post for a later time. Stick around for next time and I’ll tell you what MY derby name is and what it means.

Linking up with Hunter of Happiness and Fan Friday with Sarah.