These Summer Harvest Zoodles are simple zucchini noodles covered in a creamy avocado sauce and topped with lots of summer veggies! 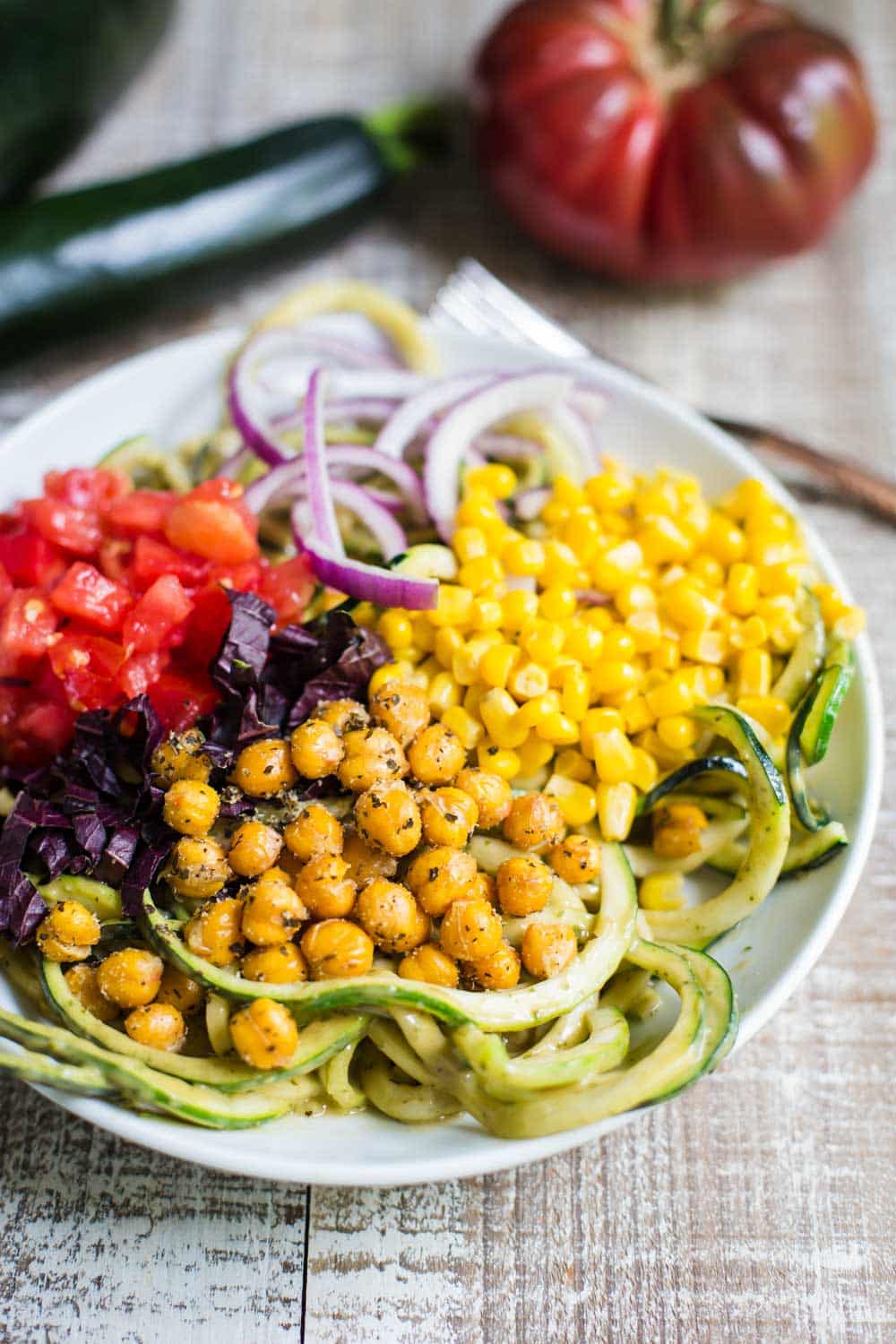 It’s that time of year where my zucchini plants are thriving and I practically can’t eat/ give the zucchinis away quick enough. Also, butternut squash. It’s my first year growing butternut squash and I’m going to have to get inventive to figure out what the heck to do with all of it. By the end of the summer, I predict that I’ll have harvested about 30-40 butternut squashes. Why I planted so much, I have NO idea. So, expect to see LOTS of yummy squash recipes in the coming weeks.

Today we’re keeping it simple with some classic zoodles. They’re smothered in a yummy avocado sauce and topped with some good ole’ summer veggies. The idea behind this recipe is to simply pile high the noodles with whatever veggies you have lying around, growing in your garden, or that you bought super cheap at the market because all the things are in season (my favorite time of year!). 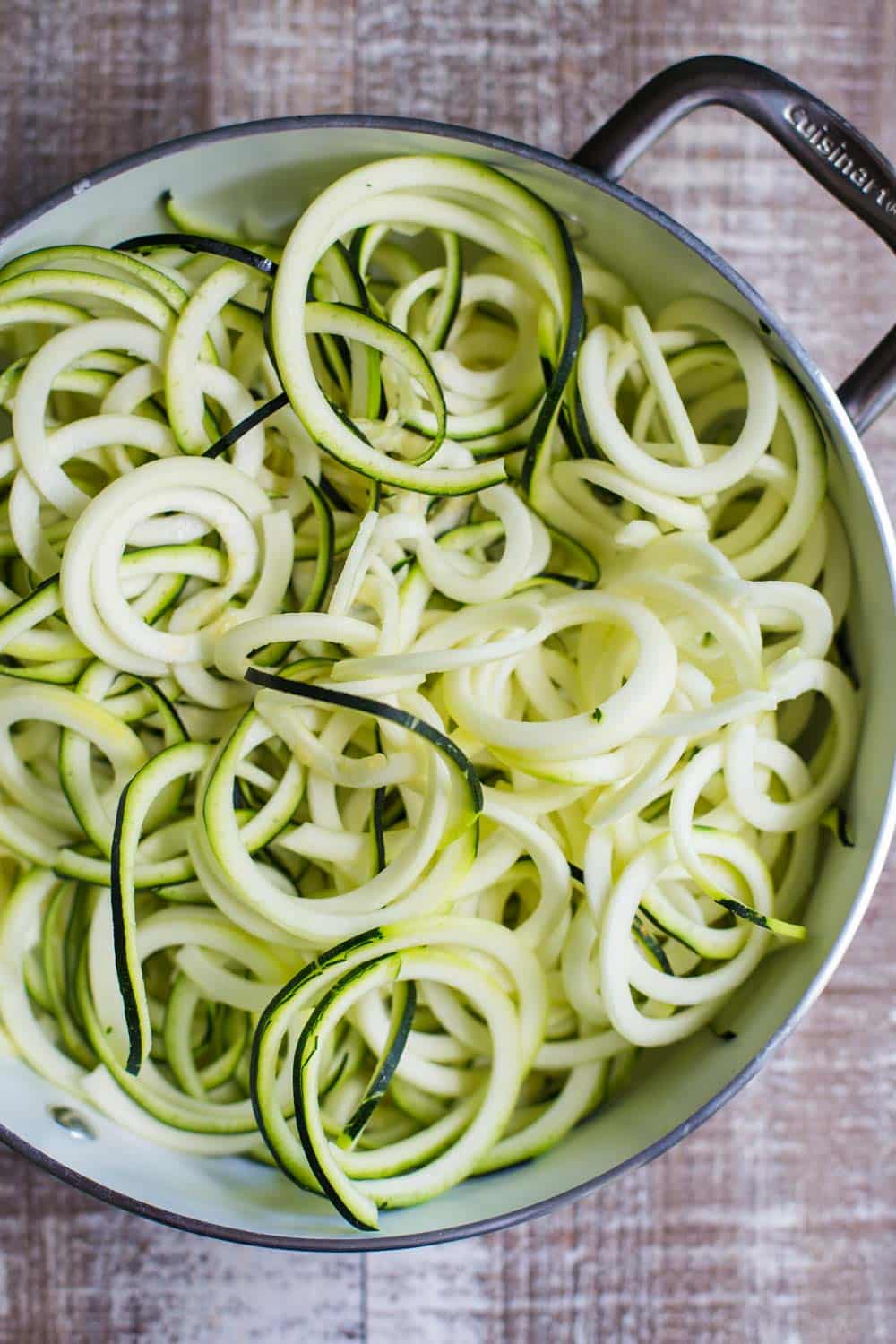 I’ve been cooking my zucchini noodles very minimally lately. I used to cook them a bit too much so that they were a little mushy. These days, I’ve been enjoying my zoodles almost raw but cooked just enough so that they’re warmed through. Before, I think that I was trying to make the zoodles resemble actual spaghetti which, lets be honest, is never going to happen. So now, I’m embracing the crisp crunch of the zucchini noodles in all of their summer glory.

The avocado sauce is also pretty simple. It’s just an avocado, mayo, basil, and garlic (plus a little more). I’m a huge fan and basically want to put it on everything! 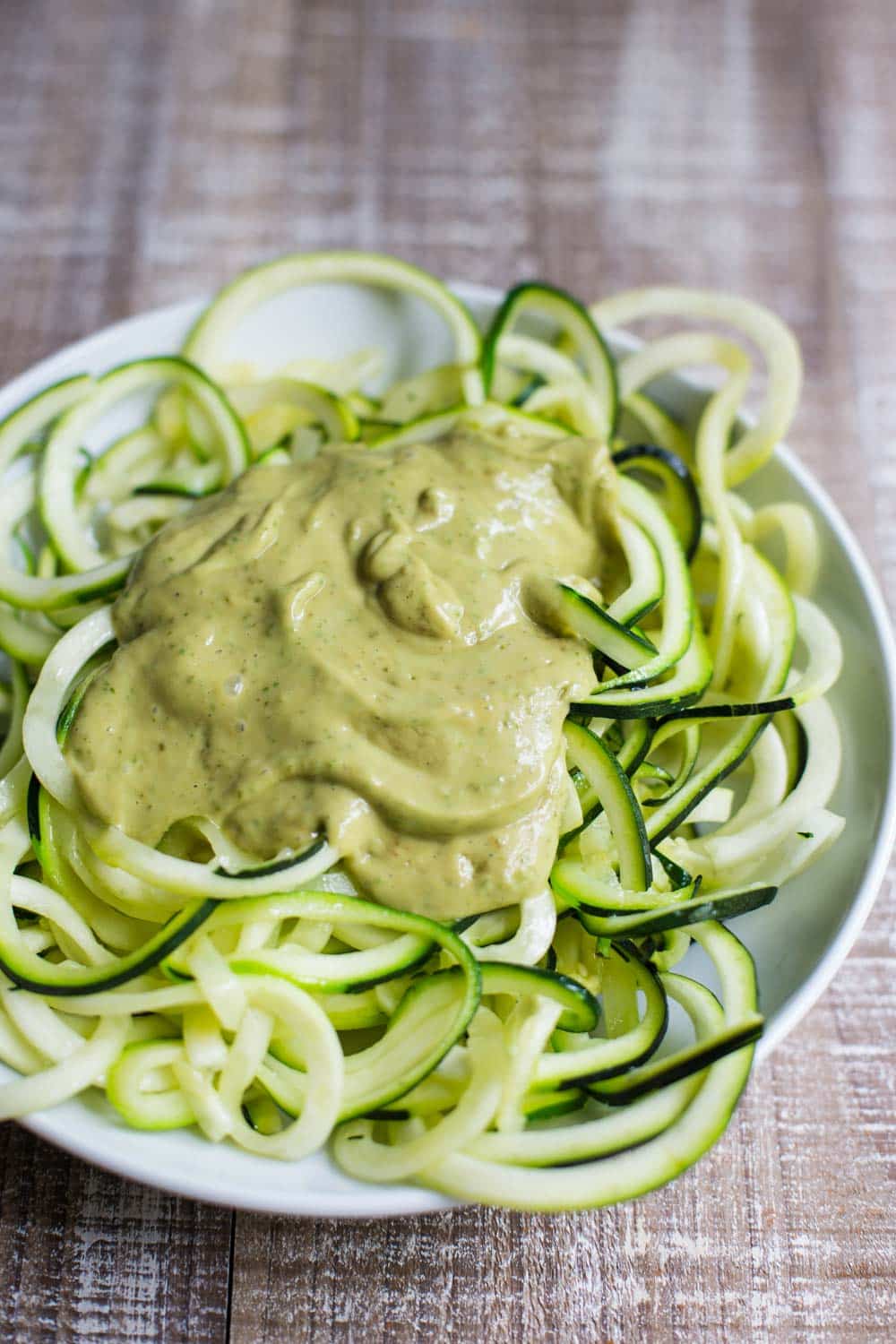 The toppings include raw corn (because I’m obsessed with corn right now), heirloom tomatoes that were given to be after a shoot that I did for Nashville Lifestlyes magazine, red onion, and some purple basil (which for the record, tastes exactly like regular basil…it’s just purple). Oh yea, and some crispy chickpeas that were a last minute addition. 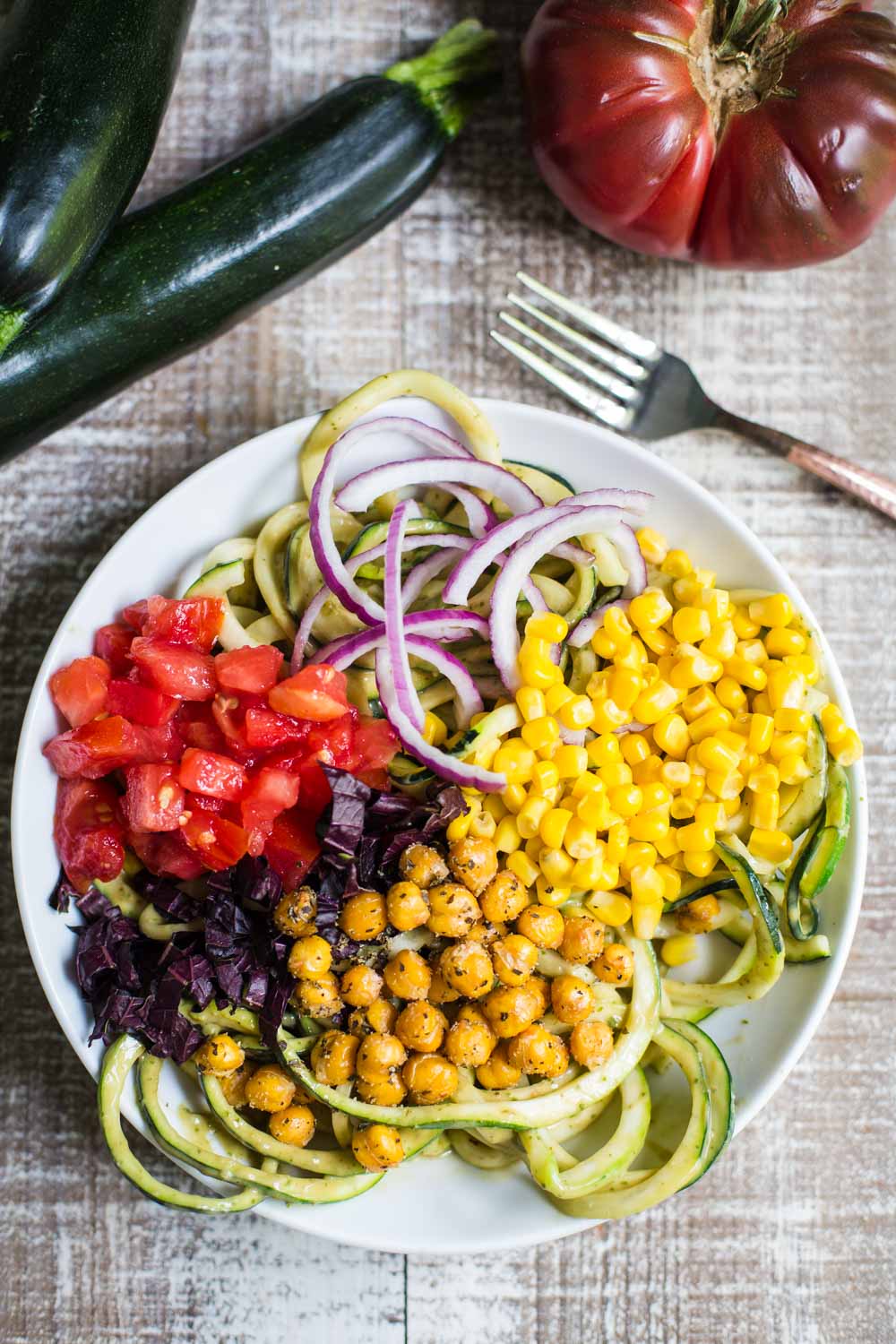 Other good summer veggies toppings could include: bell pepper, green beans, any kind of squash, cucumber, eggplant chunks, okra, and so on. Have I mentioned how much I LOVE summer?? Why can’t it stay all year long?

If you want to up your carb intake, you can always mix all of this into a plate of pasta which is something that I do quite often. I’m a huge fan od zucchini noodles mixed in with regular noodles! 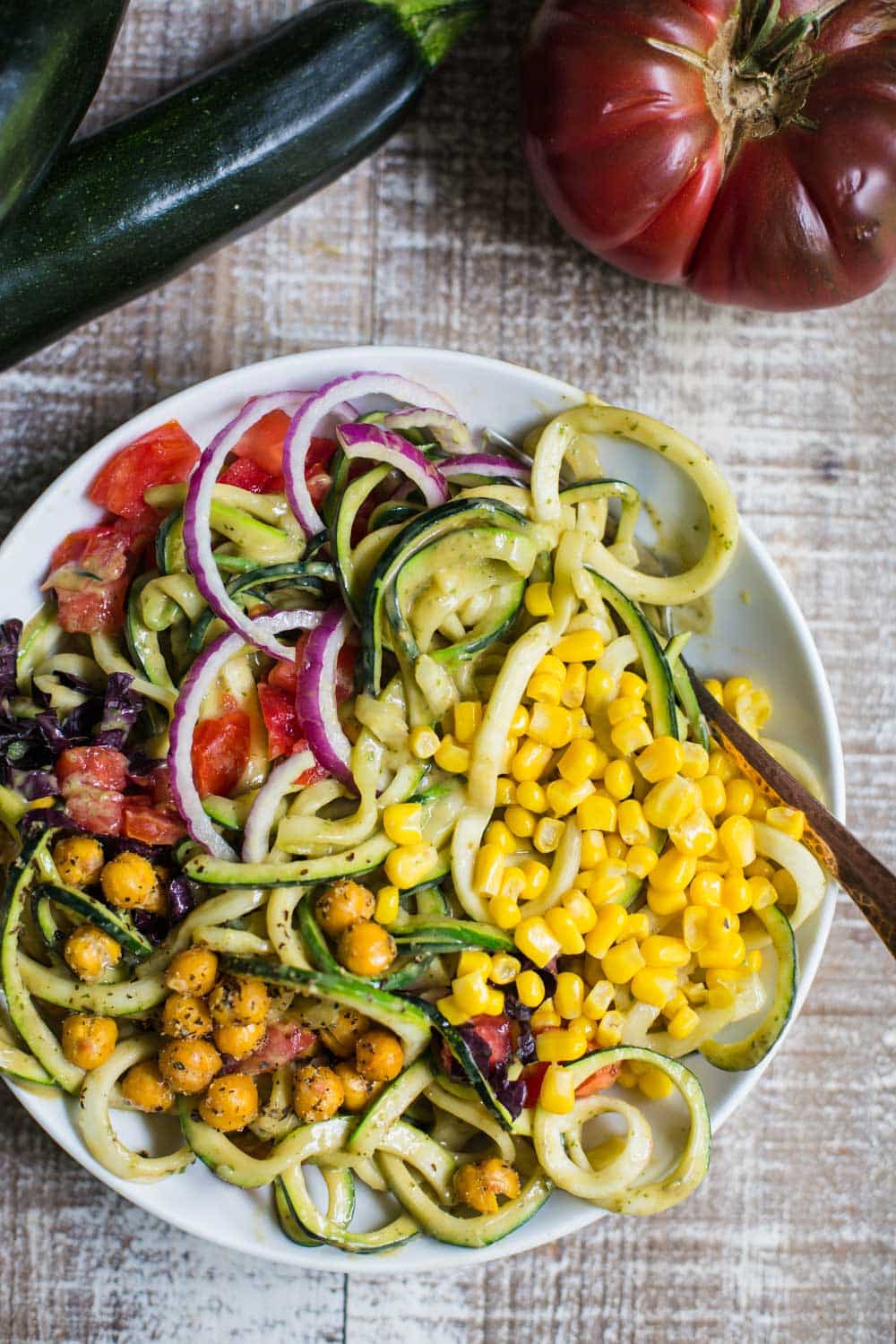 For the avocado sauce: