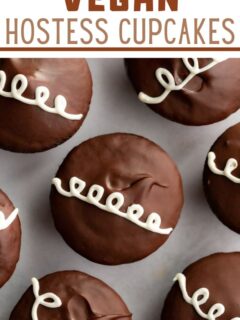 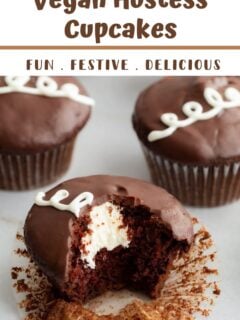 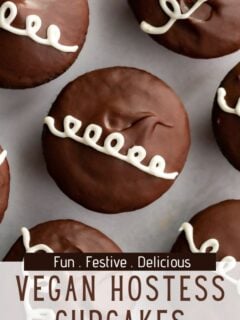 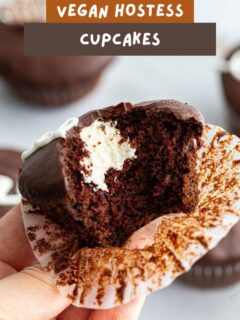 These Copycat Vegan Hostess Cupcakes are so fun to make and a delicious vegan alternative that EVERYONE will love! Great for parties, holidays, or just because :)

I’ve been wanting to make these cupcakes for YEARS now and I’m excited that I finally got the chance to work on the recipe! I’m very proud of how these turned out and I can’t wait for you to give them a try.

The base of the cupcakes is based off of my Vegan Chocolate Cupcakes recipe that I’ve been in love with for years. I also used my vegan ganache recipe for the topping. Once I realized that I already had the main elements of this recipe tested and ready to go, the whole thing came together pretty quickly.

I’m not gonna lie to: these cupcakes are relatively simple to make BUT they do take a while to put together. There are several different elements to this recipe and while they’re all pretty simple on their own, it does take a bit of time to get everything ready.

HOWEVER, I promise that it’s totally worth it! :)

Ans don’t worry- I did you a favor on this one and did NOT even bother calculating the nutritional info on these. Sometimes It’s best to simply indulge in peace and ignorant bliss.

That’s it for today! I’m keeping this super short and VERY sweet! ENJOY!

Don’t forget to tag me on social media if you end up making this recipe! I always love to see what y’all are getting up to in the kitchen!

These Hostess Copycat Cupcakes are so fun to make and absolutely delicious!

For the icing piping:

I suggest storing the leftovers in the fridge and enjoying within 4 days.