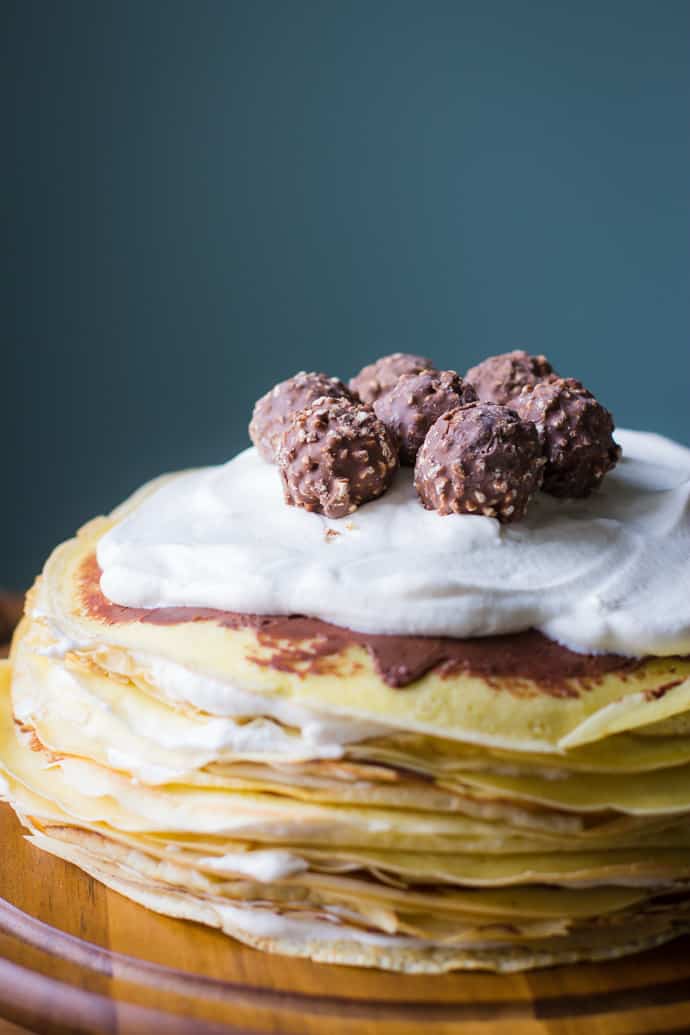 This is the last post I’ll ever write from my dear little East Nashville cottage. It is the first home I owned and I’m having incredibly mixed feelings about selling it.  I made this cake as a homage to my house and invited some friends over to help me say goodbye (and eat the cake so I didn’t eat the whole thing myself). 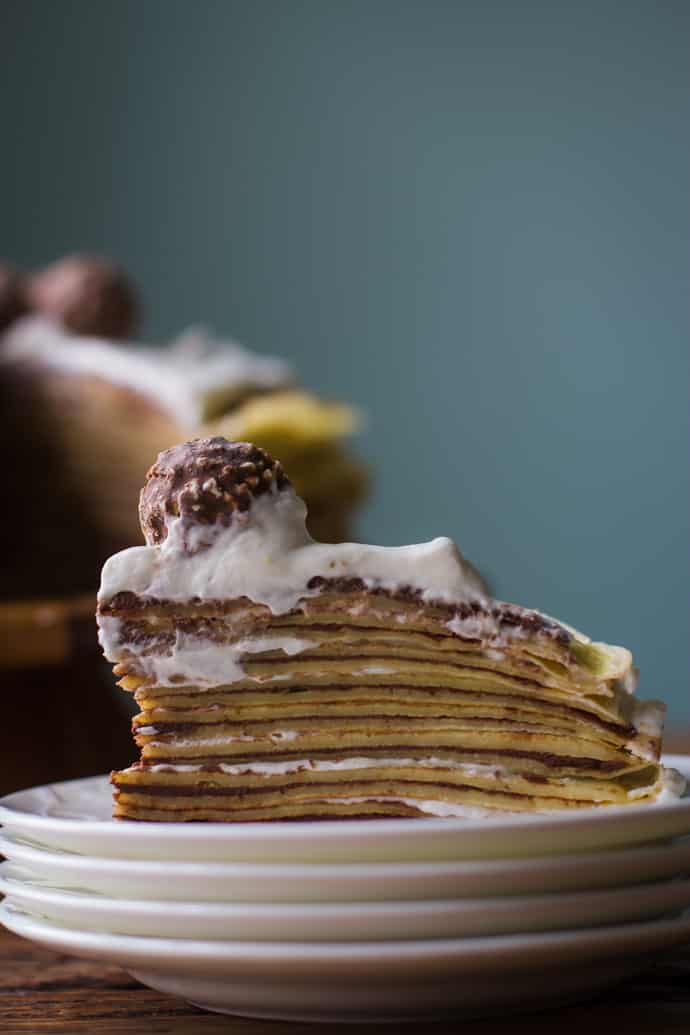 I bought this house somewhat on a whim when I was 24. I put zero dollars down and had just enough cash at the time to cover the earnest money, buy a new couch (which was the first piece of real furniture I had ever bought myself), and pay some guys from my grandmother’s church to help move my stuff. Everything else I put on a credit card (which I then spent the next year paying off). [Don’t use credit cards, kids.]

I don’t necessarily consider buying this house the wisest move I ever mad,e but I will say that it turned out to be one hell of an investment.

The reason I bought the house? Because I have 2 large (very large) dogs and finding a reasonable rental with a fenced back yard that allows large dogs was next to impossible. And getting rid of the dogs was obviously not an option so instead I just bought myself a house. Smart, huh?

Everyone told me that you’re not supposed to buy a house without putting at least 10% down but preferably 20%. It really pays off to ignore life rules sometimes. [but still, please don’t aimlessly use credit cards.]

Years later, this house has been so good to me. It ended up being everything I needed and I am so so grateful for that. It makes me scared to leave but there’s really no turning back at this point. And so we forge on to new and exciting things in our lives. 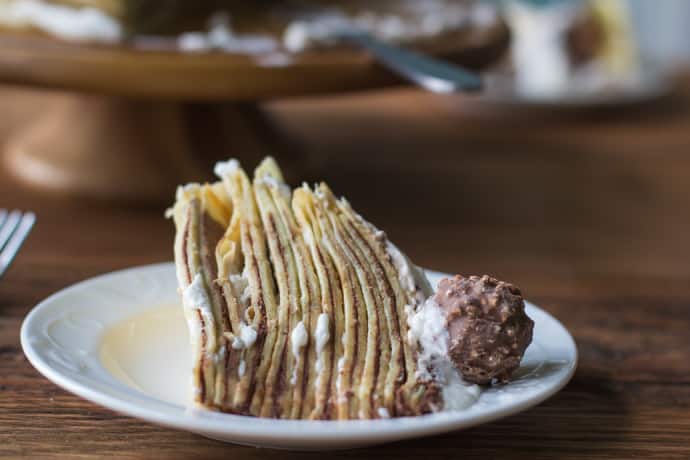 So why the heck am I moving if I love this house so much?? I don’t really know. I mean, I do know. The timing is right. Stephen and I have talked for a while about moving a few miles out of the city to a bit more seclusion. We want something bigger than this small cottage. I want more space for the chickens to run around and more property for the dogs to patrol. I want exponentially more land for an exponentially larger garden where watermelon and pumpkin plants can sprawl out with no constraints and sunflowers can grow 12 feet tall.

But in the meantime I made a Chocolate Ganache filled Crepe Cake in ode to my little East Nashville cottage. 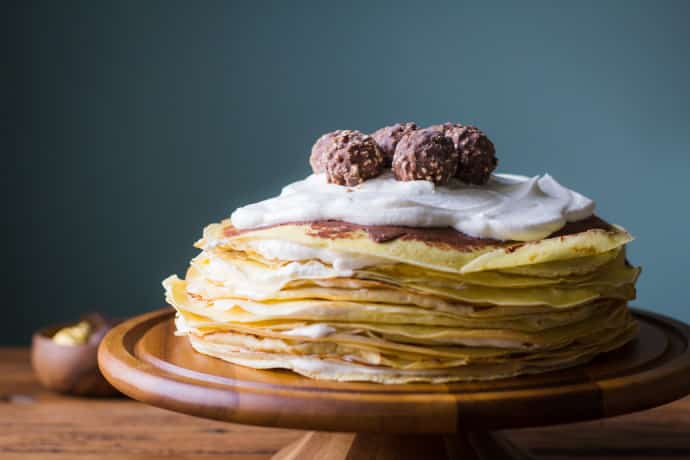 I’ve made lots of things in this kitchen and I wanted the last thing to be extravagant. Making ~20 large crepes, chocolate ganache, and whipped cream and then assembling it into a cake seemed fitting enough. 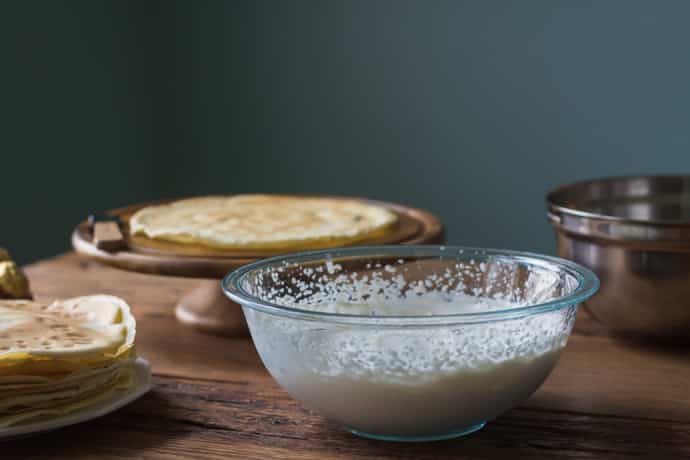 The crepes were made with a simple recipe. Chocolate ganache was made by combining heavy cream and dark dark chocolate, and whipped cream was whipped up with the addition of Bailey’s creamer in it. I wanted to put regular Bailey’s in it but alas. Liquor stores are closed on Sundays. 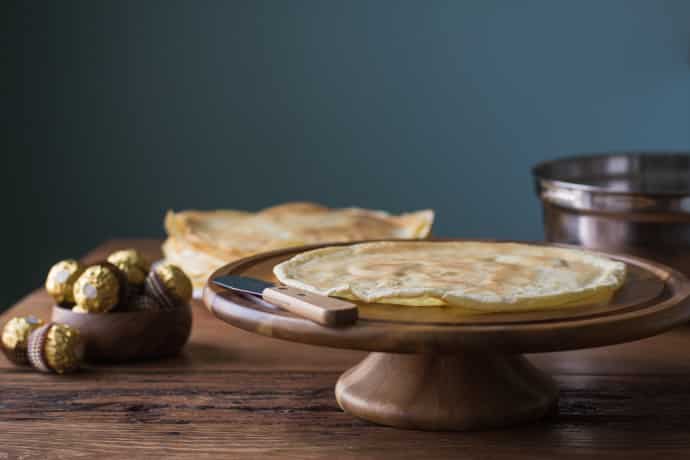 Every other crepe had a layer of ganache and then a layer of the Bailey’s whipped cream. 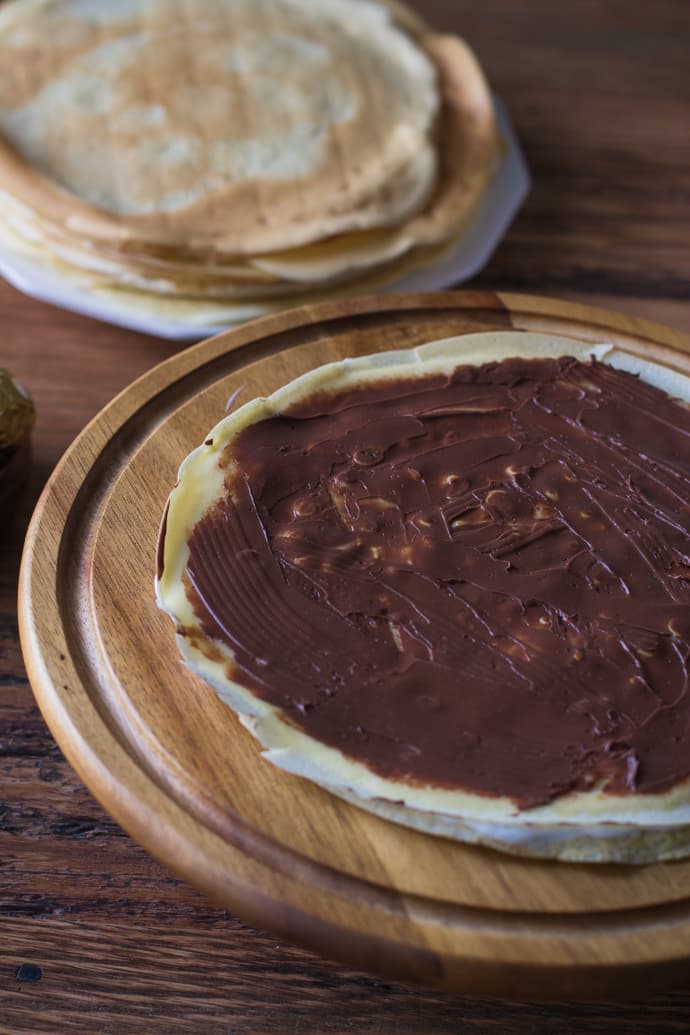 All the way up until the whole cake was assembled. 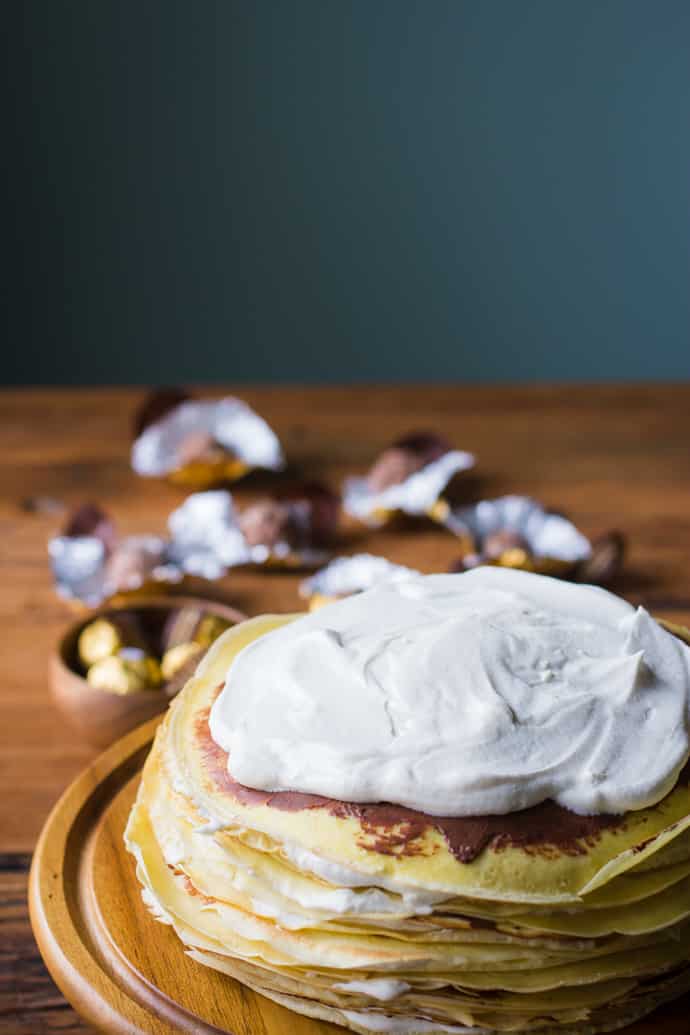 I topped it with some Ferrero Rocher chocolates because they remind me of my childhood and…. why not. 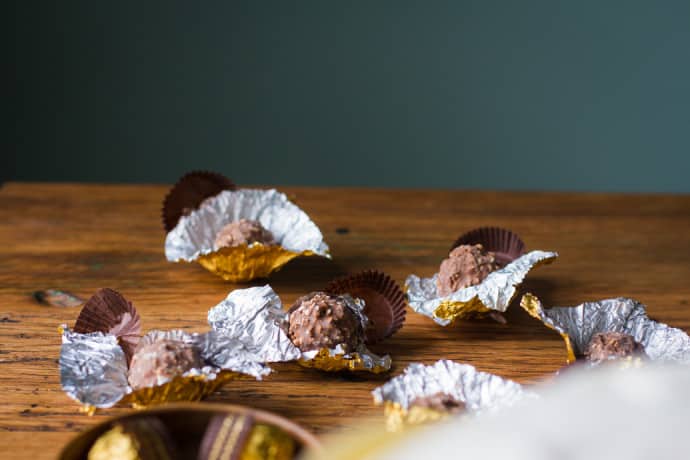 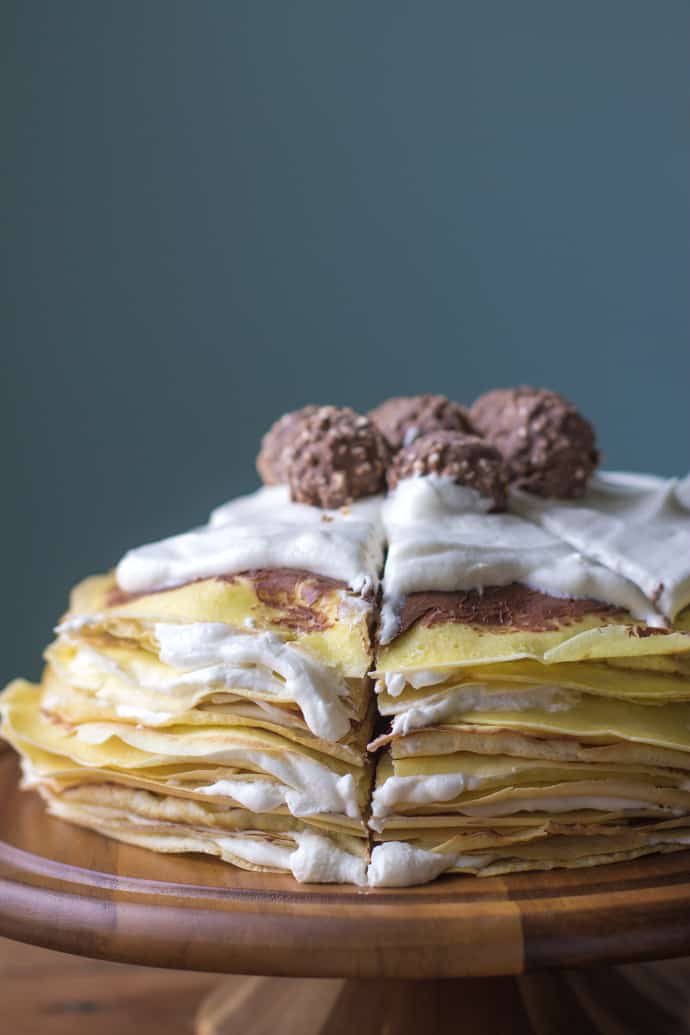 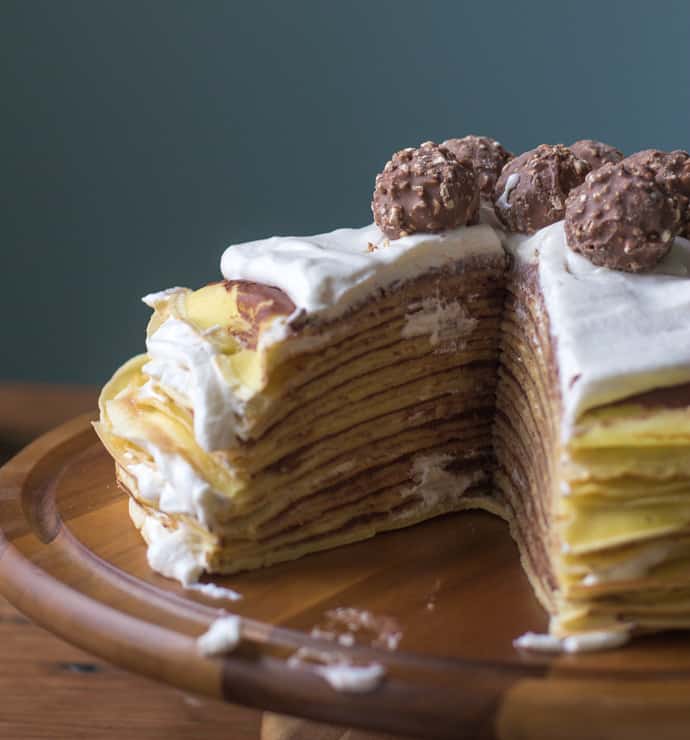 SO, here’s to my lovely little house that I will miss dearly and that provided the setting for all of my first recipes and blog posts.

For the whipped cream:

For the Whipped cream:

To assemble the cake: