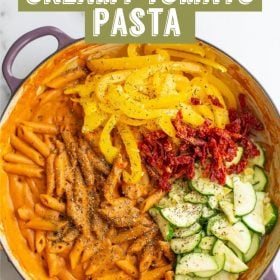 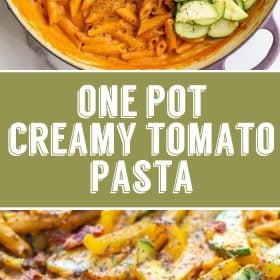 If you’re looking for the ultimate EASY vegan dinner then this Creamy Tomato ONE POT Pasta is your girl! It comes together with a handful of pantry staples and if needed, the veggies could easily be swapped for frozen veggies of your choosing.

I have another vegan one pot pasta that you should check out as well. It’s this One Pot Lentil Pasta and it’s GOOD. 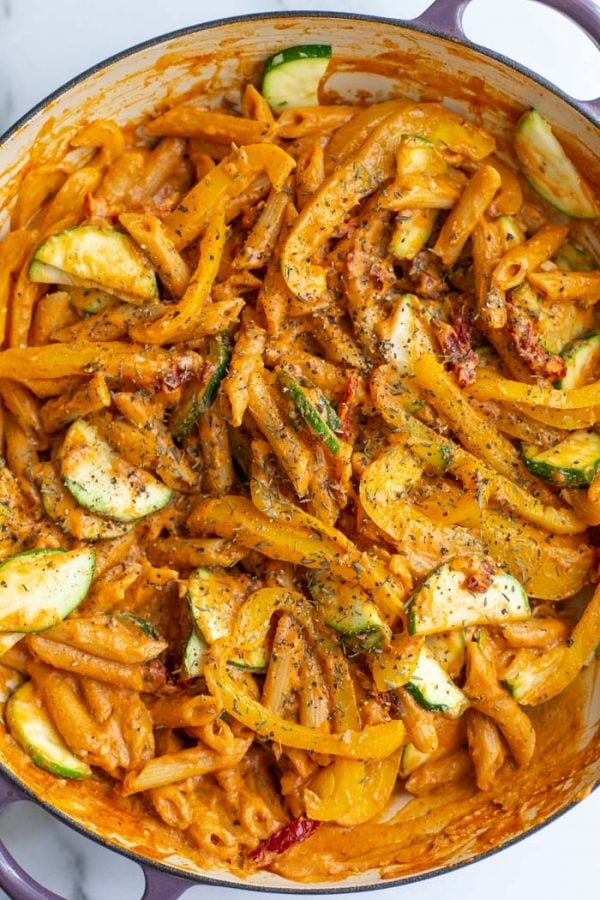 One of the things that y’all have been asking for more lately is EASY one pot plant based dinners and that is exactly what this creamy tomato one pot pasta is. It’s not the *prettiest* dish that I’ve ever made but I promise it’s SO SO TASTY!

My goal for this was to make something that felt very summery and uses up ALL of those yummy seasonal veggies that are so cheap at the store right now. Mission accomplished! You could use any veggies in this really but we happened to have zucchini and bell peppers on hand so that’s how I’ve made this. 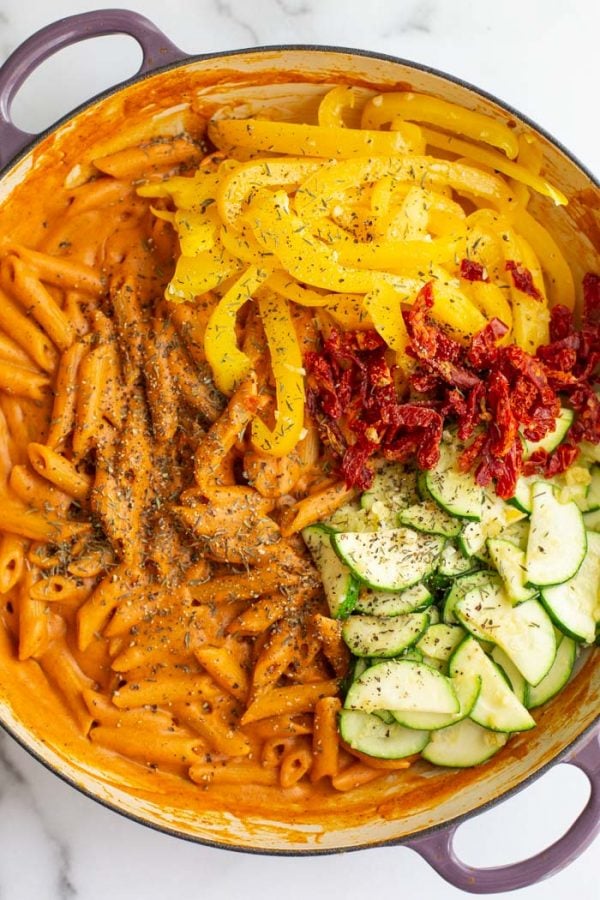 One of the things that I HATE is when I see a recipe that calls for cashews soaked overnight. I totally get that it’s a necessary evil of blending up cashews but I never ever remember to do it. SO, I was very happy to find out that it was possible to flash soak cashews by boiling them in water for 20 minutes. I learned this from one of my clients, Lexi from Lexi’s Clean Kitchen. HERE is her post all about making cashew cream if you’re interested.

I used Lexi’s method for soaking the cashews and then blended them together with some diced tomatoes and spices. The sauce for this is very similar to the VERY FIRST vegan recipe that I ever posted on my blog and I wanted to give it a fresh look :) 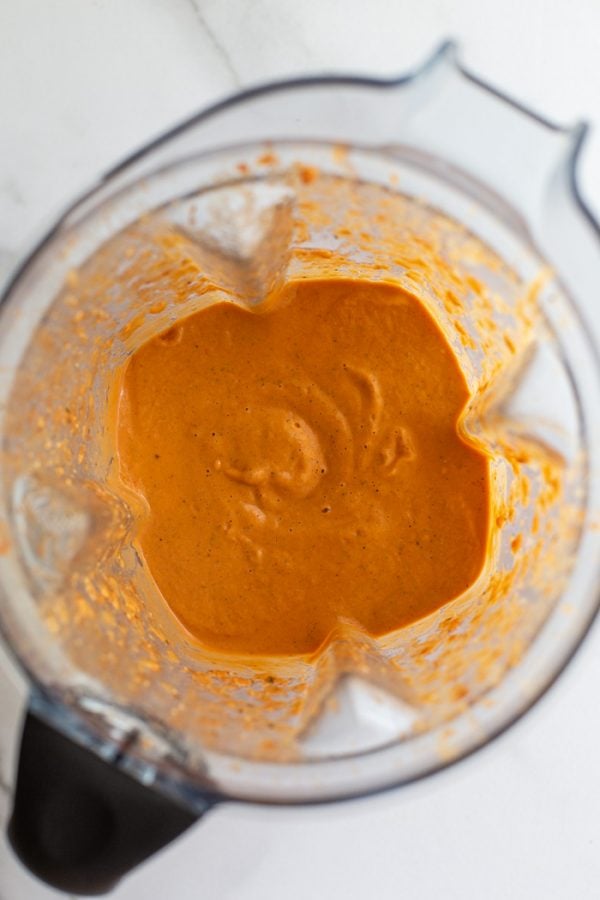 If you want this to cook even faster, you COULD saute the veggies in a separate skillet while the pasta is cooking. But if you’re looking for as FEW pots to clean as possible then the one pot method is for you!

Personally, I’m an extremely impatient person so I often make this in 2 skillets so I can have it ready in just about 15 minutes. But, either way works well :) 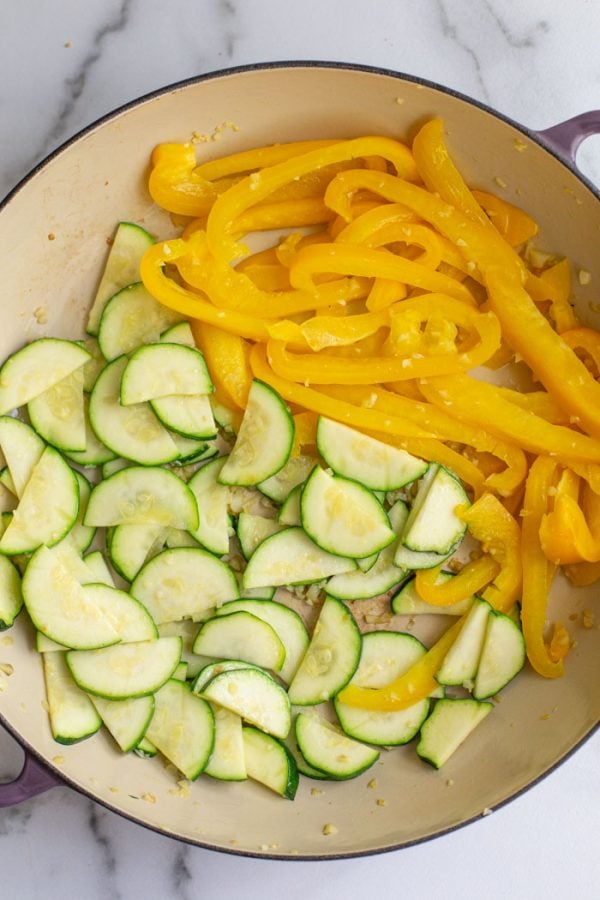 Ingredients in this one pot pasta:

Should I make more one pot vegan dinners like this? Are you into these? Let me know because I’ve been having so much fun creating these easy weeknight plant based meals for you! 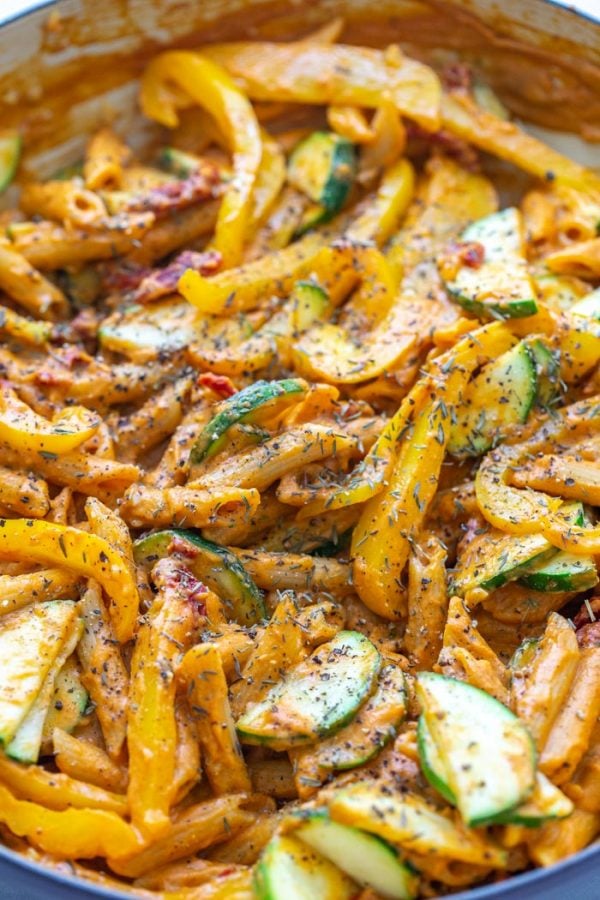 See how to make the past here:

*You can make the whole meal a little bit quicker if you cook the veggies in a separate skillet at the same time that you’re cooking the pasta in the sauce. Then you can combine into the same skillet when the recipe indicates.

*If desired, you can also leave out the fresh veggies and instead stir in about 2 cups of frozen veggies. This makes this recipe a little cheaper (depending on the time of year) AND easier to throw together :) 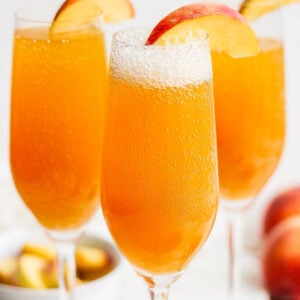