Workout Woes: the problem with math 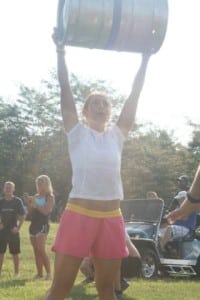 This picture is rather irrelevant for the post you’re about to read but as a baby blogger, I’ve learned that every post should have a picture. So, here’s one from my crossfit days. I hope it in somehow enhances the rant that is about to follow.
Last night I had planned to edit some photos, try out some fancy new photoshop actions that I recently got, and get a post ready (the first of what will be quite a few) about my time in England.
Instead, you’re getting a rant about my workout woes. You can thank jetlag (very mild jetlag) and a cold (the kind that makes you want to rip your throat out and stomp on it for relief…ya know, that kind of  a cold).
Despite that, I still made it to the gym after work last night which leads me to the point of this random little post: what idiot decided it was a good idea to make olympic barbells 45 pounds!!? I mean, seriously, what’s wrong with an even 40? I’d even settle for 50!

An alternative title for this post could be: ‘how is that I have (nearly) 3 degrees and still can’t do the math it takes to load up an olympic barbell to the desired weight?’ But, that’s simply too long.
What’s even more is that I was working out with 2 friends: one a teacher and the other who has an MBA. Between the 3 of us we should be able to figure out simple math.
So, I often find myself in a thought process that goes something like this: “okay, the bar weighs 45 pounds. There’s currently a 25 pound weight on each side and a 5 pound weight on each side (a weight we regularly refer to as the baby weight). So that’s….105 pounds, cool. BUT, now we need to switch the weights out so there’s 145 pounds on the bar”. blah blah. (I just erased a long boring math paragraph so as to spare you).
Point being: if the bar weighed an even 40 or 50 pounds, doing all that math after a long day at work would make life just a little bit easier. Hey, it’s the small things in life.
And, I’ll end this rant by noting that I do realize olympic barbells are (I don’t really know, but probably) 45ish pounds due to a conversion over from kg. Yep, that’s what google says and google never lies.
Hey look, another crossfit picture from that same tournament where I’m making a really horrible horrible face. It was liked enough that it was published in a sports magazine and a couple blogs. I still don’t see it and make that same face just looking at it. And here I am posting it on my blog that is supposed to be a place of pretty and happy things. And so, I digress. 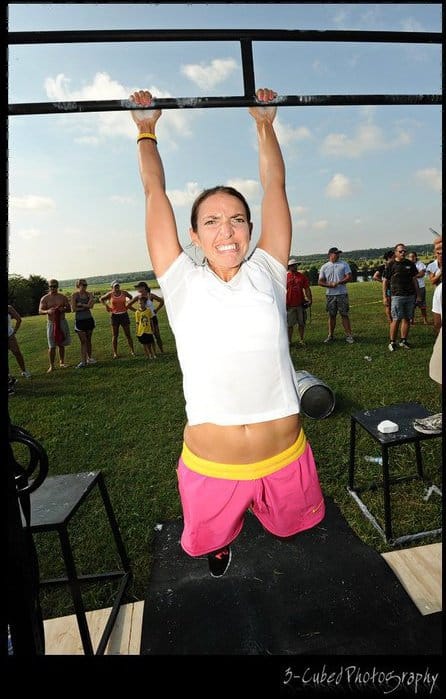 6 Comments on “Workout Woes: the problem with math”