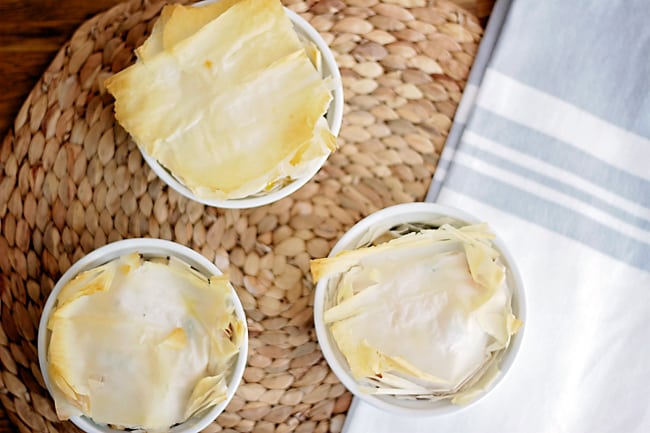 I have a confession to make: I drank THREE cokes yesterday. I just really love fizzy drinks but my general rule of thumb is to have no more than 1 or 2 a WEEK. I failed miserably yesterday. Oops! And I could definitely feel it yesterday when I was trying to do on skates sprints and my body just wasn’t wanting to go. Being healthy is just SO hard sometimes. I digress.

Especially around this time of year though, I try to eat much healthier. I start craving veggies more and so much is in season that you can get an abundance of watermelon and zucchini for pretty cheap at the market.

I started making this Chicken Pot Pie recipe a few years ago and it’s become a staple in my house. The nice thing about this lightened up recipe is that it has NO butter, very little flour (3 tablespoons as opposed to 2 cups), and it’s fast and east to make! 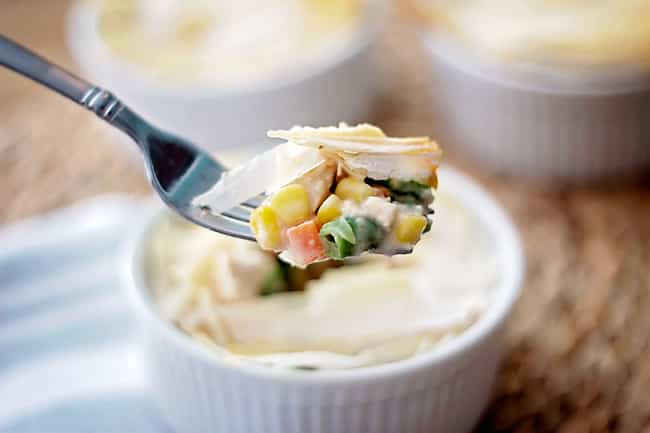 Ingredients:
2 medium chicken breasts
1/2 cup cooking wine
2 1/2 cups of water
2 cubes of chicken bouillon
6 ounces of fat free evaporated milk
3 tablespoons of flour (use whole wheat flour to make it a bit healthier)
1 roll of phyllo dough
1 1/2 tablespoons of parsley
1 bag of frozen vegetables (you can also use fresh but if you’re me, you’re making this dish when you’re feeling extra lazy)

Instructions:
Pre-Heat oven to 375° F
1) In a medium skillet, combine water, cooking wine, chicken bouillon, and chicken. Bring to a rolling boil and then lower heat to a simmer. Simmer until the chicken is fully cooked (165° F).
2) Remove chicken from the skillet. Save 2/3 cup of the leftover broth for later.
3) Once it has cooled down a bit, shred chicken and set aside. Don’t forget my easy chicken shredding tip!
4) In your same skillet on low low heat, combine the saved broth, flour, and fat free evaporated milk. Cook on low until the sauce thickens which should only take a couple minutes. 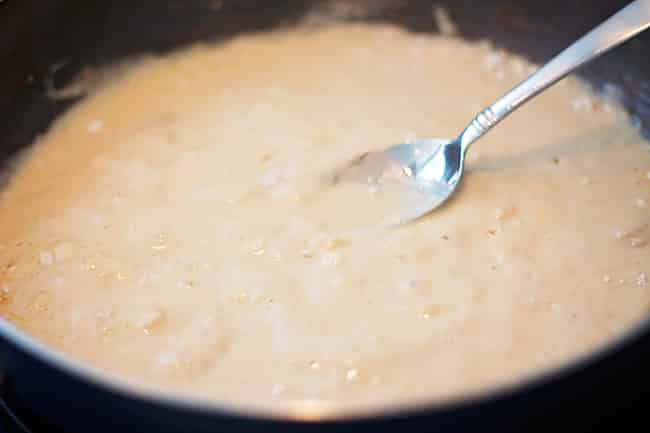 5) Once the sauce is thick, add in the parsley, shredded chicken, and frozen veggies. Cook for an additional 3 or 4 minutes until everything is nicely combined. 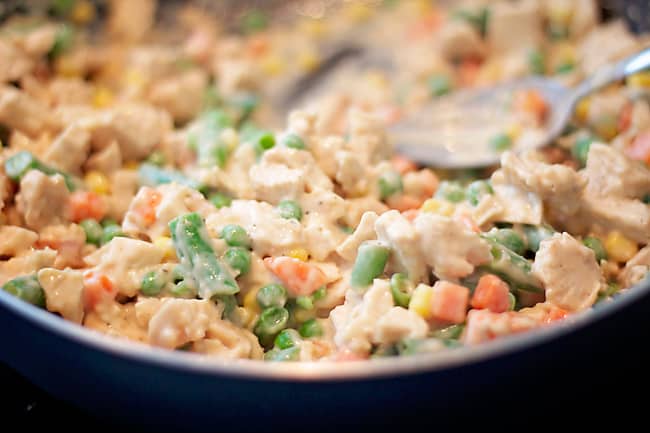 6) In either 1 greased pie dish or several smaller greased ramekins, line the bottom of your dish(es) with about 4 layers of phyllo dough. 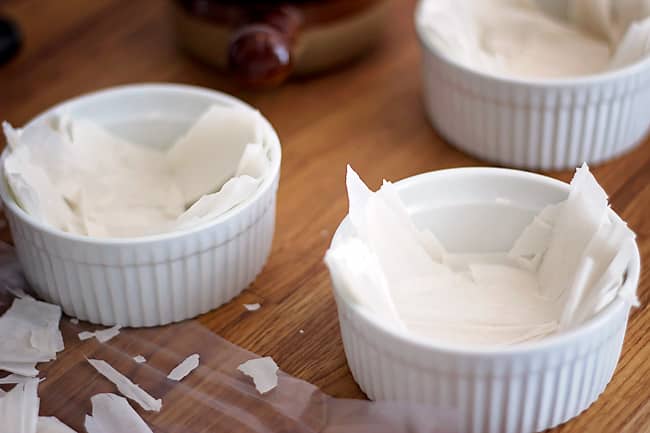 7) Pour mixture into pan(s) evenly and then top with an additional 3-4 layers of phyllo dough. Lightly spray the tops of the pies with cooking spray. 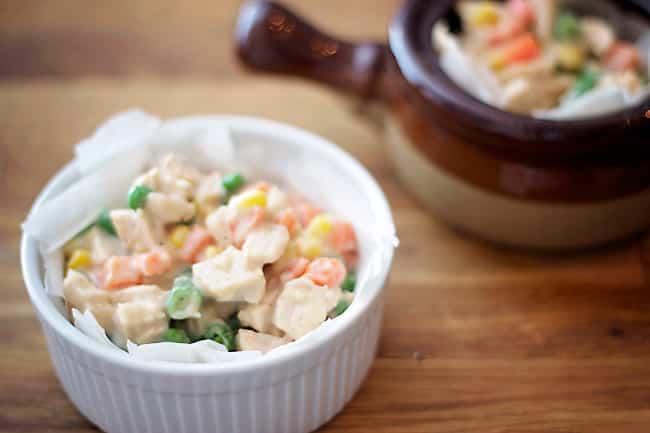 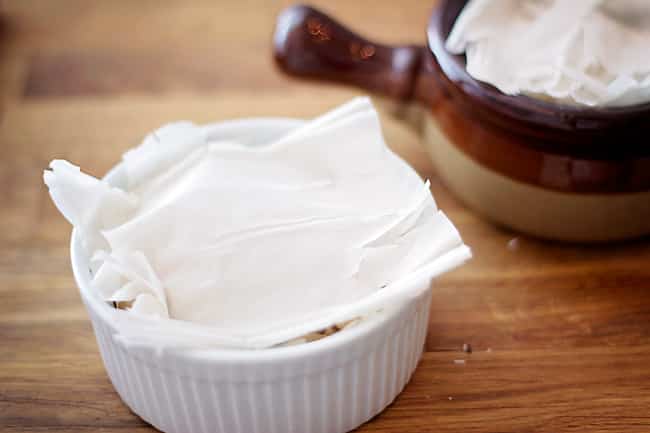 8) Bake pie(s) for 12 minutes or until the phyllo dough begins to turn golden brown.
9) Let cool and ENJOY! 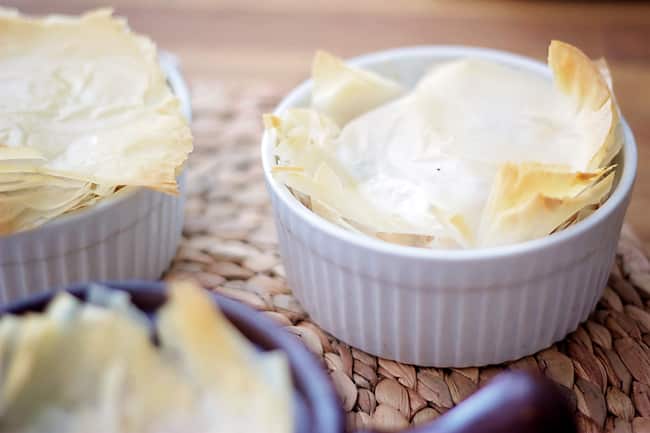 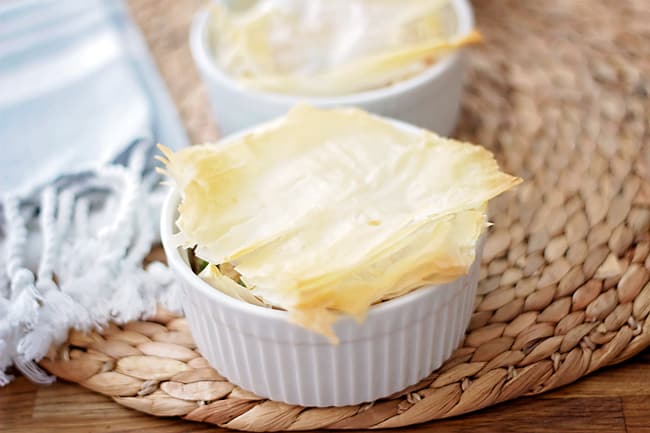 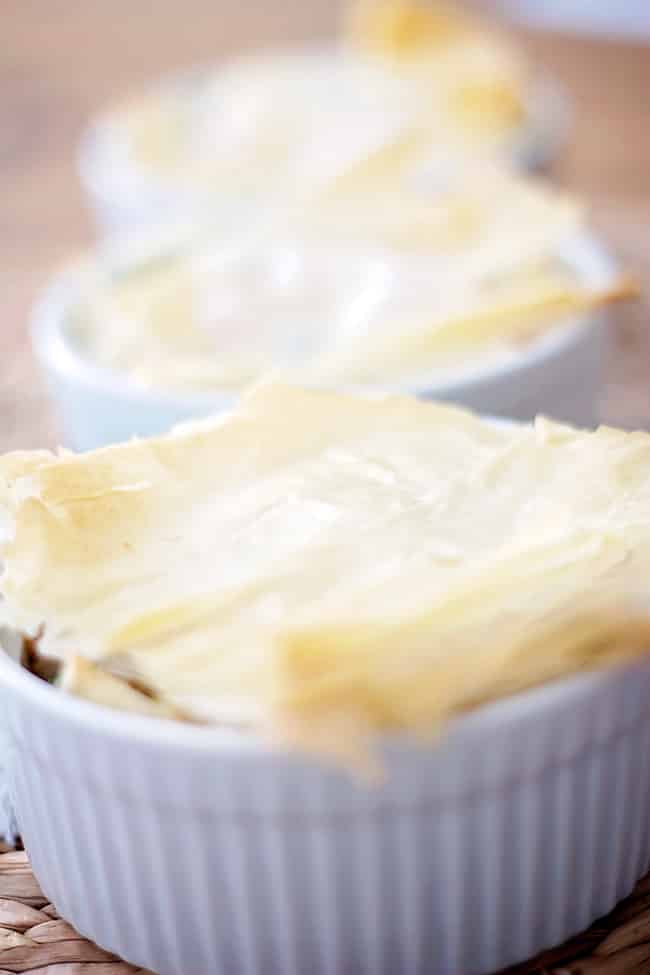 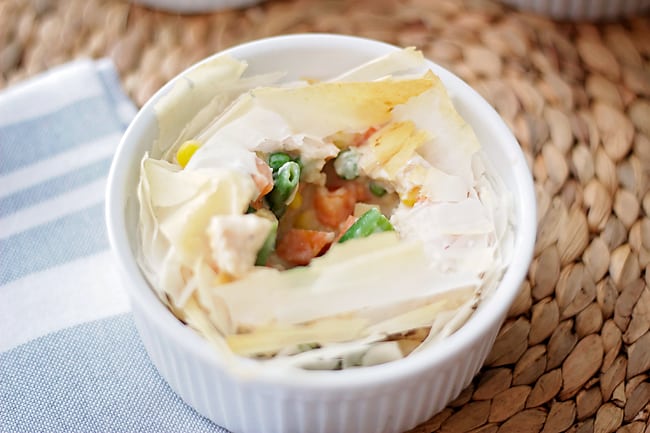 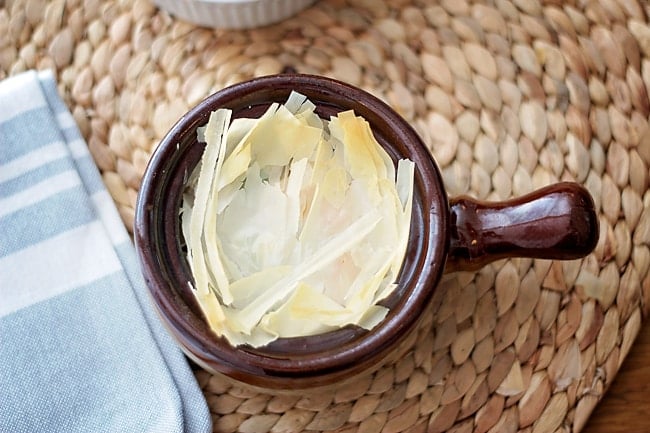