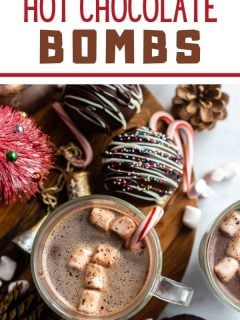 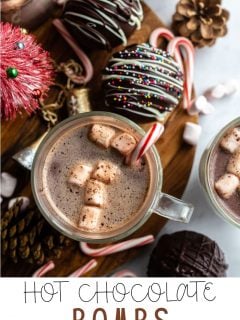 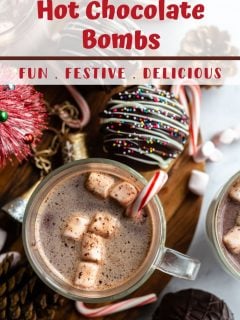 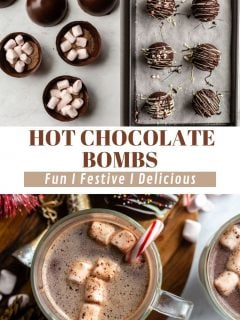 If you’re here, it’s probably because you saw these hot chocolate bombs all over social media and wanted to see what all the hype is about. OR your kids are begging you for them and after initially googling where to buy them, you landed on my blog because they’re 1) ridiculously expensive to buy and/ or 2) sold out EVERYWHERE!

WELL, whatever your reasoning for being here: LET’S MAKE HOT CHOCOLATE BOMBS!

I first learned about hot chocolate bombs on facebook when I kept seeing people in a local parenting group asking where they could buy them. I just ignored those posts until a few weeks later I learned from TikTok what these things are. I’m almost embarrassed to admit HOW MUCH I’ve learned from TikTok over the past year.

And when I stumbled upon dairy free hot chocolate mix AND vegan mini marshmallows on the same day, I decided that these Hot Chocolate Bombs with Marshmallows just HAD to happen asap.

What are hot chocolate bombs

In case you live under a rock and have no idea what I’m talking about, let me explain. Hot chocolate bombs are simple hot cocoa powder/ mix + mini marshmallows encased in a sphere of chocolate.

How do Hot Chocolate Bombs work: When hot liquid is poured on top of the “bomb”, the chocolate melts and the powder + marshmallows pop out. The result is a rich and creamy cup of hot cocoa.

There’s really not much too them and I think it’s a result of how bored we’ve all become stuck at home this year, BUT damn do kids love these things.

Good luck finding these things locally. I called around to a few places and they’re ALL SOLD OUT (at least as I’m writing this during winter 2020).

Here are some online options:

At this time, I have not attempted to make these without a mold.

How to make Hot Chocolate Bombs

These are pretty easy to make once you get your hands on a mold. They require just 3 simple ingredients:

**Down below (right above the recipe card) I have a step-by-step VIDEO tutorial on how to make these so I suggest checking that out!**

Start out by melting your chocolate in a large bowl. We’re going to do this in small spurts in order to temper the chocolate. This will result in shinier chocolate bombs AND make it so that the chocolate doesn’t melt immediately upon being touched.

Once fully melted, you’ll simply spread the chocolate evenly around the molds and then place them in the fridge to set. I do this using a small spoon but it can also be done using a pastry brush for a more even bomb. See notes in the recipe card for how to use a brush.

Once the chocolate is set, fill half of the molds with hot chocolate mix + marshmallows. To seal the bombs together, I place the tops, edges down, into a warm skillet to ever so slightly melt the edges. I then immediately place it onto a bottom mold and gently press down to seal them together. As the chocolate re-hardens, it’ll seal the top to the bottom.

Admittedly a lot of work for hot chocolate ?? BUT kids love them and they’re super fun gifts ?

See how to make the Hot Chocolate Bombs in my stories HERE.

These Homemade Hot Chocolate Bombs are so easy to make and such a fun cold weather treat!

*I found a dairy free powdered hot chocolate mix at Target but anything works. You can also make your own!