Welcome to the final day of Pumpkin Week! I’ve been really into fritters lately (see HERE) so we’re rounding out or recipes with a PUMPKIN FRITTERS recipe!

I really loved putting together this week of pumpkin recipes! It’s something that I would love to do a few times a year. I’m strongly debating doing a cocktail week in early December (!!!) if I can find the time to test all of the recipes. It would be ridiculously hard work….having to recipe test cocktails day after day…but I want to do it for you :) For the fritters: I wanted a recipe where we could use fresh pumpkin (is similar ways that we often use other squashes) instead of canned pumpkin puree. I did a video for a client recently where she put fresh chunks of pumpkin in a curry and it was SO GOOD and so I wanted to come up with other fun ways to use fresh pumpkin. There are so many recipes out there for other squashes but not very many that utilize fresh pumpkin. I hope to fix that :)

Oh, and that pumpkin curry recipe that I was talking about can be found HERE. To make the fritters, we just need a skillet with hot oil in it and a big bowl. All of the ingredients get mixed together into the same bowl while the oil is getting hot. Once ready, we’ll drop about 1/8 of a cup of the pumpkin batter into the skillet and flatten it lightly.

The pumpkin fritters are fried for about 3-4 minutes on each side so that they’re a nice golden brown all around.

AND that’s it. Super simple and easy and SO GOOD! The parmesan and pumpkin combo is one that I really love! AND that’s a wrap on Pumpkin Week 2018! In case you’ve been following along very closely (is anyone doing that!?) I had originally planned on posting 6 recipes. BUT life is busy and instead of finishing that last recipe, I took Jemma to a pumpkin patch and farm this morning to spend time with family :) The perfect ending to pumpkin week, right? 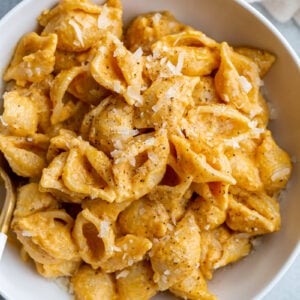