I’ve come to the conclusion that everything is better in cupcake form. Plus, it’s easier to lose track of how much you’ve eaten and then there’s no guilt. Because that’s definitely how life works.
I’ve been wanting to make some form of a taco “cupcake” for a while now. They kept popping up in my Pinterest feed except they were made with wonton wrappers. Lame. I’m sure those taste wonderful but I wanted to make a REAL mini taco salad (I still can’t decide on the right name for these), corn tortillas and all. So, that’s what we’ve done here. 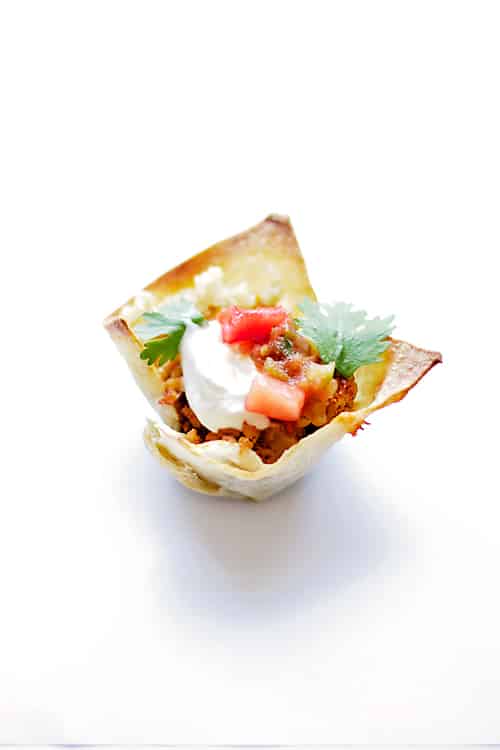 Remember back to one of my very first ever recipes (I hesitate to even share this) when we made guacamole and homemade tortilla chips? This is basically that, plus taco ingredients. 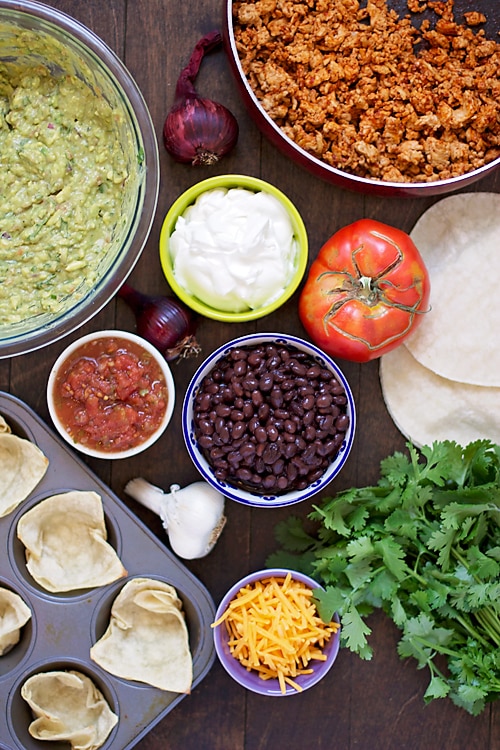 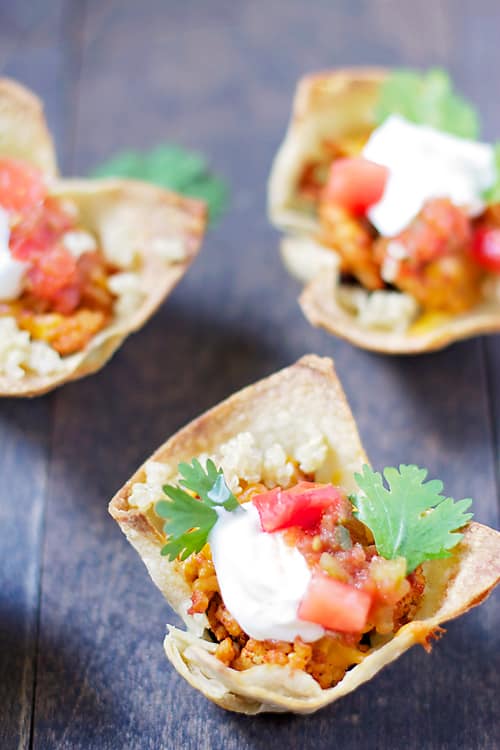 Start by preparing your shells. I let these stress me out, but don’t be like me. Sometimes the corn tortilla is just going to sit the way it wants to sit and no amount of fiddling with it will make it like being in a cupcake tin any better. Just let the tortillas do their thing and it’ll all work out just great.
Cut the edges off of the tortillas so that they are square-ish. I personally felt a little guilt throwing all that tortilla away so I saved the extra and plan to make awkward shaped tortilla chips out of them soon. 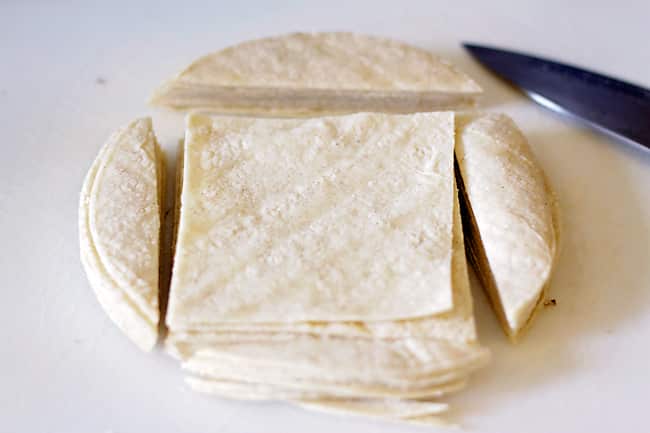 Position the tortilla squares into a greased cupcake tin. Again, don’t fret this part. Just shove em in there, being careful not to tear them. That being said, a few of mine tore a little and it didn’t make any difference. These are just easy.
Give the shells a quick spray of oil and sprinkle them with a bit of salt. Then bake them (with nothing in them) for 8-10 minutes, until they start to brown around the edges.
Next, just fill them how you see fit. I started with a layer of black beans. Then a teeny bit of cheddar cheese. I then filled them the rest of the way up with the ground turkey/ quinoa and topped with another healthy sprinkle of cheese. 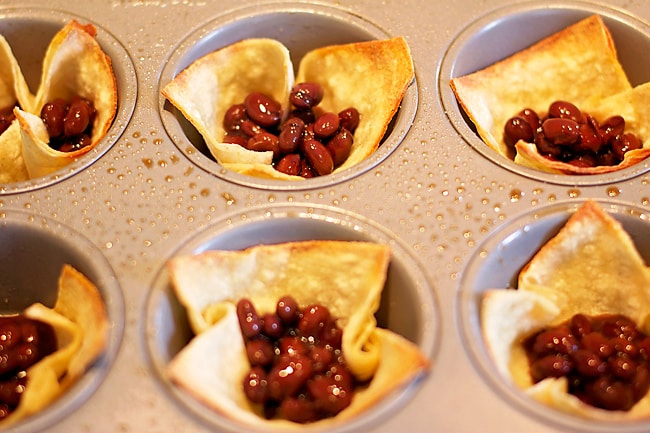 Bake for an additional 10-12 minutes or until the cheese is nicely melted and the shells are a good golden brown. 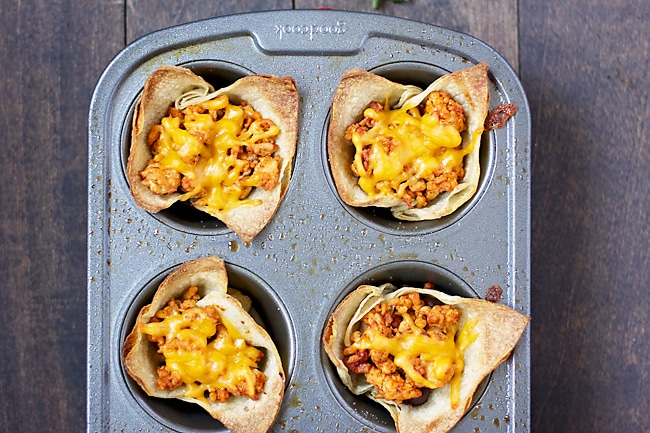 Top with your favorite taco fixins and enjoy! I went for sour cream, salsa, a touch of cilantro, and (not pictured) a good spoonful of guacamole. I decided on the guac later and I highly recommend it! 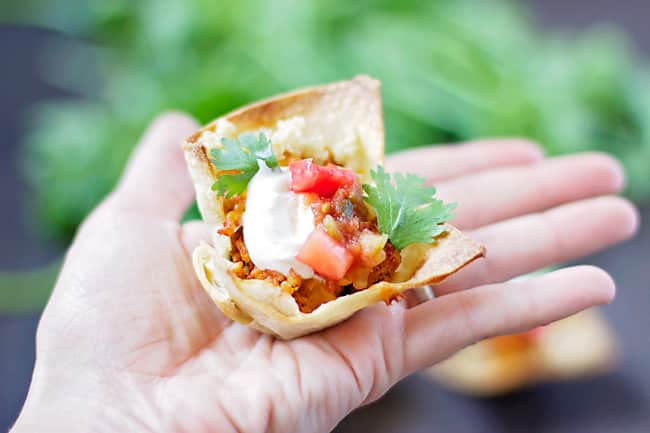 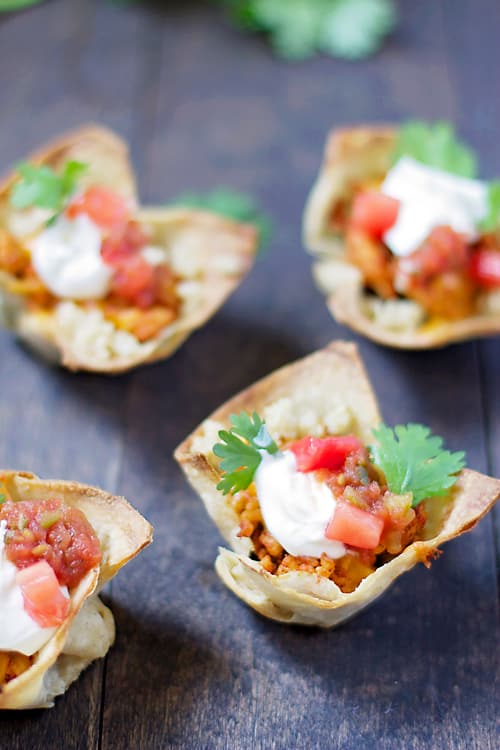 Taco Salad Cupcakes (makes 24 “cupcakes”)
Ingredients:
24 small corn tortillas
salt for sprinkling
1 pound ground turkey*
1/4 uncooked quinoa (optional but delicious)
1 can black beans (~15oz), drained
1 packet taco seasoning (or THIS homemade recipe if you’re feeling a little more fancy)
2 cups cheddar cheese, shredded
Optional: sour cream, guacamole, cilantro, diced tomato, salsa
*These can also be made by omitting the turkey and tripling the amount of quinoa.
Directions:
Pre-heat oven to 400 degrees F.
1) Cut the edges off of the tortillas so that they are square-ish (picture above). Position the tortillas into a greased cupcake tin so that they form shells similar to a taco salad bowl.
2) Lightly spray the tortillas with cooking spray, sprinkle with salt (optional), and bake for 8-10 minutes or until they start to brown around the edges.
3) While the shells bake, brown your turkey and add in the taco seasoning according to the directions.
4) Prepare your quinoa according to directions.
5) Once they’re both done, thoroughly mix together the quinoa and the ground turkey.
6) Load up the shells by first spooning ~1 teaspoon of black beans into the bottom of each. Sprinkle with a little cheese. Fill them the rest of the way up with the ground turkey/ quinoa mixture and top with the remaining cheese.
7) Bake the ‘cupcakes’ for an additional 10-12 minutes or until the cheese is nicely melted and the shells are a good golden brown.
8) Top with your favorite taco fixins and ENJOY!
24 is obviously a good number for a party but if you’re making these just for a small family dinner, I’d recommend cutting the recipe in half. 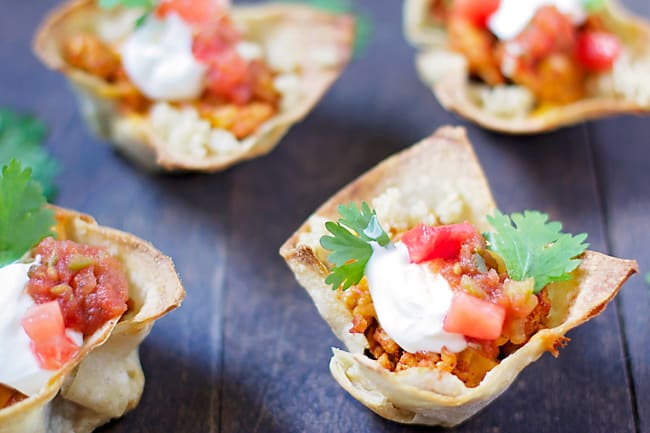 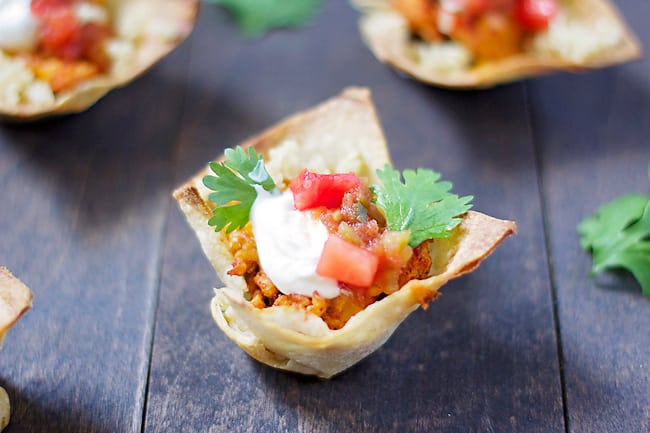 I made these this past weekend for a derby get together with my teammates and they were gone fairly quickly so I’m putting the derby girl stamp of approval on them. That’s a serious thing. Half of them were turkey and the other half were just quinoa for my non-meat eating buddies.