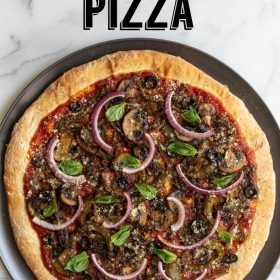 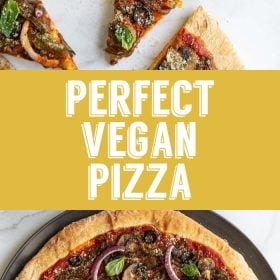 Easy Vegan Pizza– this cheese free pizza is super simple to throw together and perfect for family pizza night! The delicious crust and sautéed veggies make you not even miss the cheese :D

Oh HEY perfect pizza that I love! Giving up cheese has ALWAYS been one of the hardest part about eating a more plant based diet. ESPECIALLY ON PIZZA. Giving up that cheese can be hard.

However, this vegan pizza is seriously SO GOOD. The combo of the crispy and soft vegan pizza crust + the sauteed veggies makes this absolutely delicious and you legit do not even miss the cheese. Although, I did add a sprinkle of vegan grated parmesan on top :D

One of the most commonly asked questions is whether or not pizza dough is vegan. The average pizza dough recipe is naturally vegan (although there can always be exceptions to this) and I recently published my own Vegan Pizza Dough Recipe.

If you make vegan regularly, I highly suggest getting a pizza stone. I didn’t feature it in my photos but we pretty much always use one. It’s gotten so stained and burned around the edges that I thought it might not make for the prettiest and most appealing photos :) But trust, they’re great! If you don’t have one, you can simple use any baking tray that you have lying around.

How to Make Vegan Pizza

Start out by making your vegan pizza crust. I outlined how to do this in my last post HERE.

NOW for our toppings. While all of the veggies COULD go on raw, this vegan pizza tastes SO MUCH BETTER if the veggies are sautéed first. Pre-cooking them really helps bring out the flavors and I love it! To do this, I simple heat a little oil in a skillet and saute the veggies for about 15 minutes.

To assemble the pizza, top the crust with sauce (as much or as little as you’d like…I like it extra saucy!) and then the sautéed veggies. I also added a few extra RAW pieces of red onion because I love the crunch it adds.

Now it just needs to bake for about 15 minutes or until the crust is a nice and golden brown with just the right amount of soft and crunch.

I topped mine with a little bit of vegan parmesan that I bought online. You can also make your own vegan parm using THIS RECIPE from Minimalist Baker (one of my FAV sources for great plant based recipes!).

I created this recipe kind of as a guide but feel free to use whatever veggies you’d like or whatever you happen to have on hand!

EASY Vegan Pizza recipe that’s perfect for pizza night and something that the whole family will LOVE!