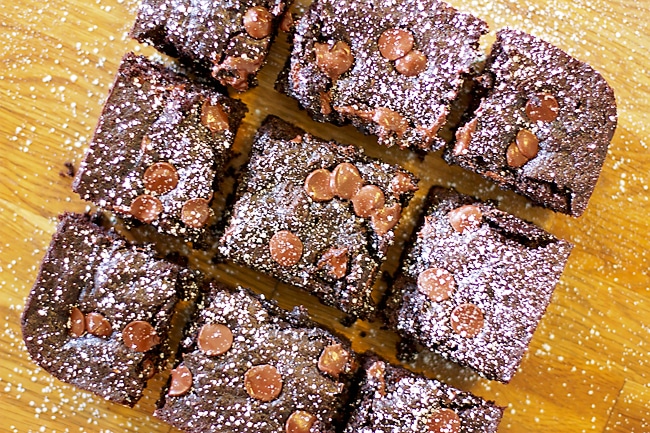 Like many a female, I very much like flowers. Every year I say that I’m going to plant a bunch of them around the house but never do. I think I only really have the mental capacity to care for either a bunch of flowers OR a ton of vegetables. The vegetables will win every year.
(Somewhat) luckily for me, Stephen knows this about me and is always a dear to bring home flowers every so often and always on special occasions. Unluckily for me, I’m not really a fan of conventional roses and that seems to be what he always brings home. So, to preempt this for our anniversary this year, I asked that instead we take a trip to the florist together so that I can pick out something that I like. Is that ungrateful? He seemed fine with it (and probably happy to not have to stand at the counter painfully trying to decide what to buy). 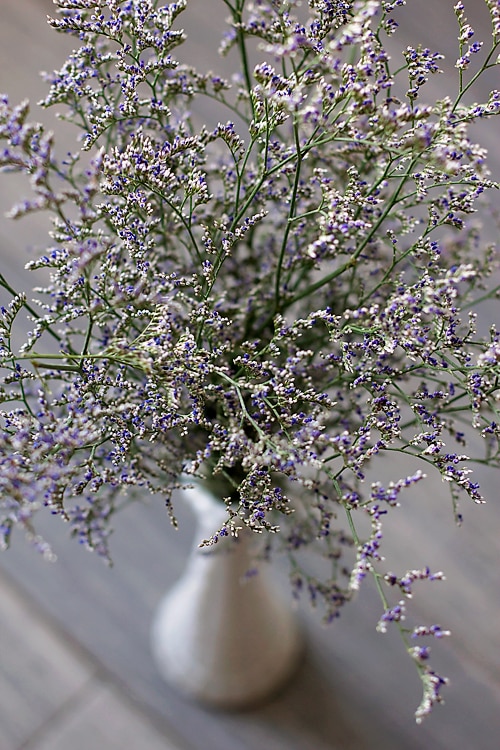 I got a big bunch of these flowers. I have no idea why. They have no smell to them at all and I’m pretty sure they’re more of a filler flower but something about them attracted me.
This has really nothing to do with Zucchini Brownies. Nothing at all. So, let’s turn to those. After all, chocolate is WAY better than flowers anyways! 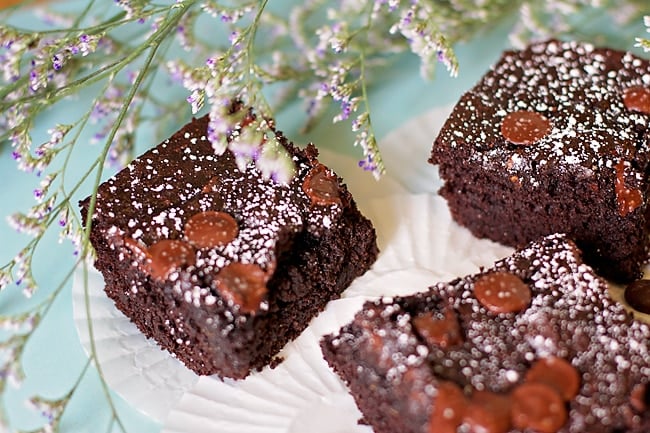 These brownies start with a decision. The decision I face 100 times a day: do I go the healthier/ lower calorie route (making these flour-less and with less sugar) or do I go the yummy route (flour and sugar)? I decided on the yummy route. Because, after all, these do have zucchini in them. So, healthy. 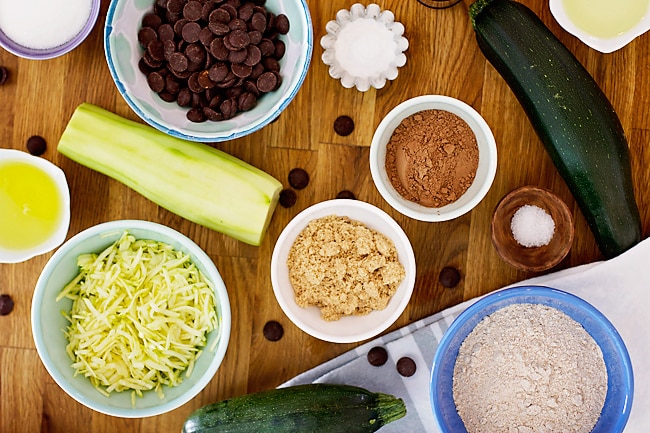 First, those zucchinis need peeled. Be careful while doing this as they’re slippery little guys and they might try and get away. Once peeled, chop into a few smaller pieces and run it through the shredder of a food processor (you can also use a box grater). If you want your zucchini pieces even a bit smaller, process them in the food processor for a few seconds.
In a medium bowl, combine the flour, cocoa, salt, and baking soda. Mix it allll together. Set aside. 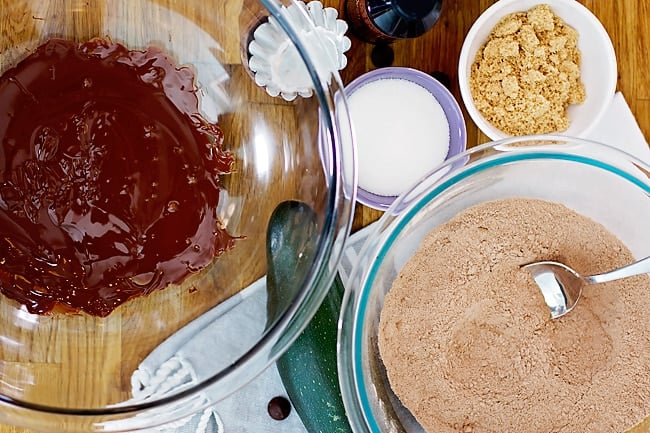 Melt 3/4 of the chocolate in a large bowl. You can use a double boiler for this. I do have one but laziness sunk in so I just microwaved them for a few minutes.
Stir into the chocolate your brown sugar, white sugar, extract, eggs and oil. Combine well. 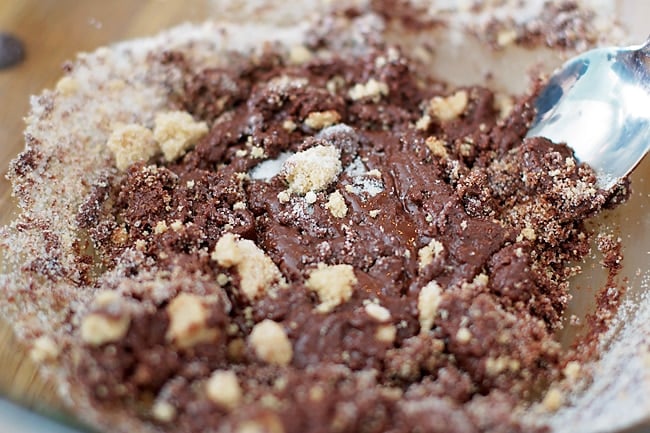 There! It’s starting to look like brownie batter now. And I have to start the self control of not eating it all before baking it. (Let yourself go crazy nibbling on the raw zucchini though).
Now we can add in the flour mixture. Mix that sucker well. 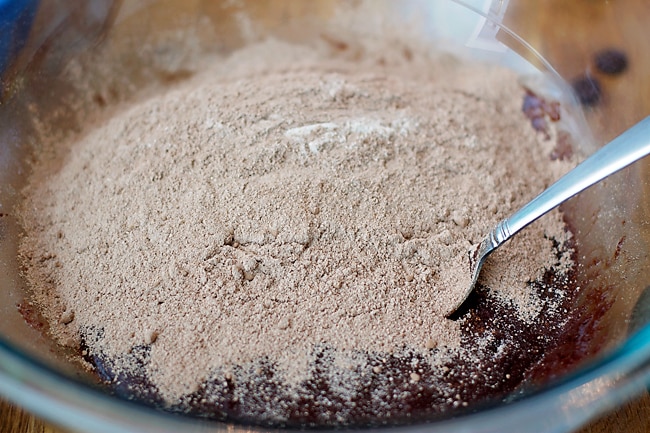 Now for the Zucchini. Zucchini is the feature of this dish so it’s necessary for it to be capitalized. Go with it. 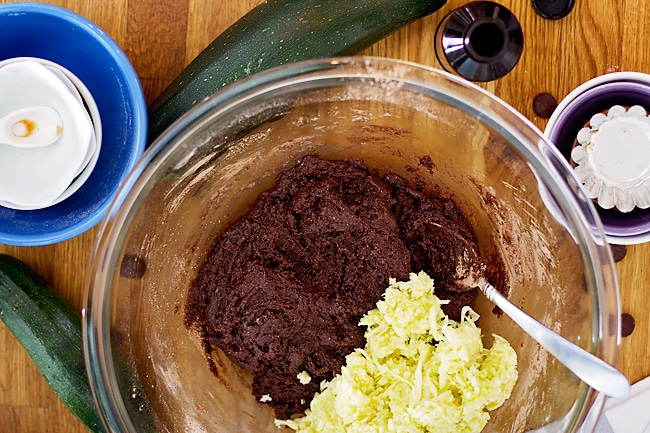 Stir that Zucchini in. Once that is all combined, it’ll look a little something like this: 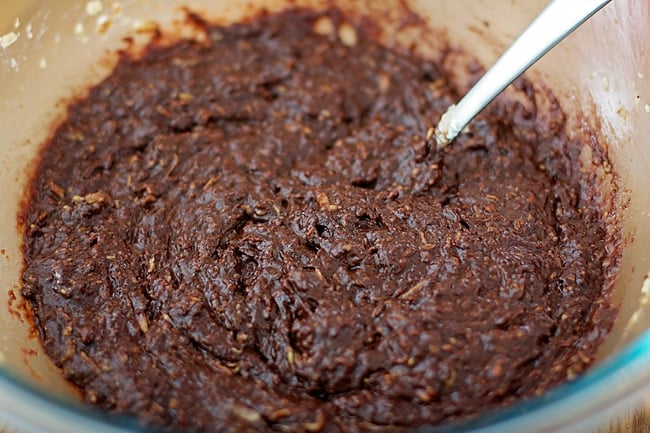 Now all that’s left to do is pour your batter into a greased 9″ square pan. And top with more chocolate, naturally.

Bake for 30 minutes and you’ve got this pan of deliciousness. 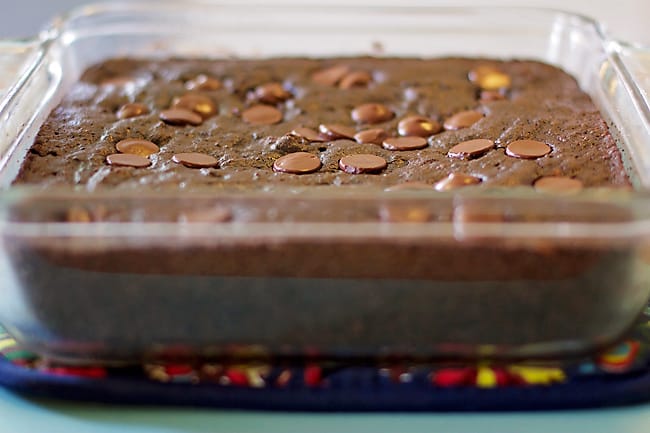 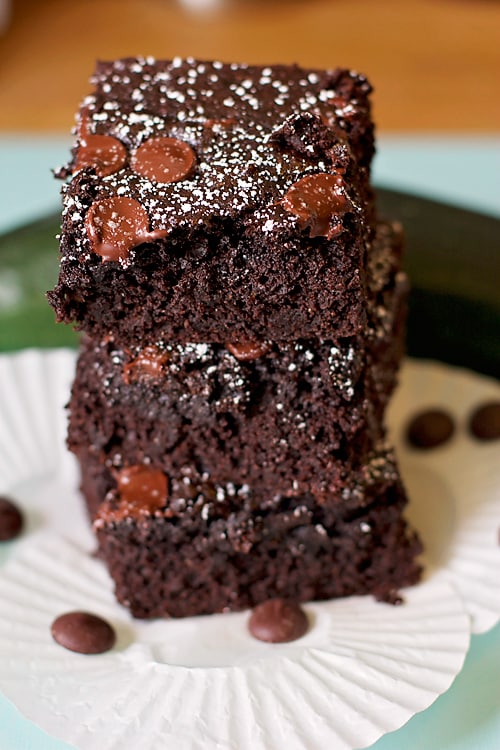 Directions:
Pre-heat the oven to 350 degrees F.
1) Prepare your zucchini by peeling them and then shredding them (either with a box grater or with a shredding attachment to a food processor). If you want your zucchini pieces even a bit smaller, process them in the food processor for a few seconds.
2) In a medium bowl, combine the flour, cocoa, salt, and baking soda. Mix it all together. Set aside.

3) Melt 3/4 of the chocolate in a large bowl. Either in the microwave for a couple minutes or in a double boiler.
4) Stir into the chocolate your brown sugar, white sugar, extract, eggs and oil. Combine well.
5) Add in the flour mixture to the chocolate/ sugar mixture. Stir until it’s all thoroughly combined.
6) Finally, stir in the Zucchini to the batter.
7) In a 9″ greased pan, pour in the brownie batter and top with your remain chocolate chips.
8) Bake for 30 minutes making sure that batter is dry when placing a fork or toothpick into it.
Cool and ENJOY!! 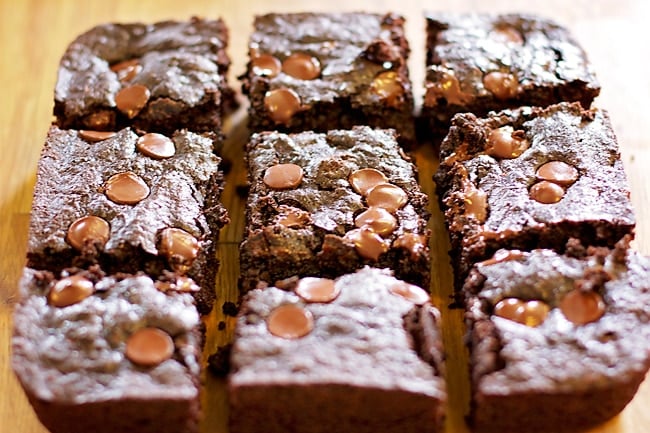 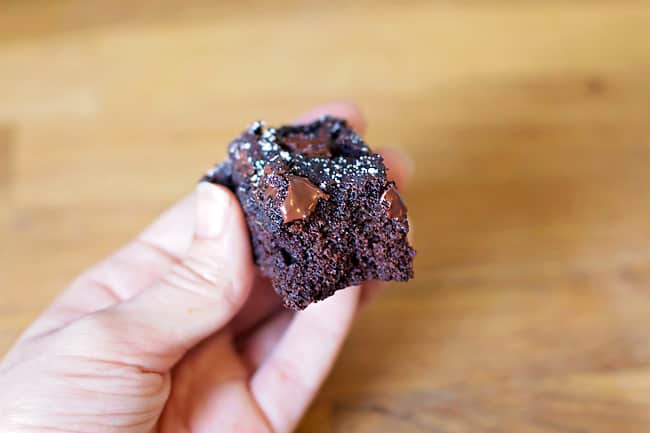 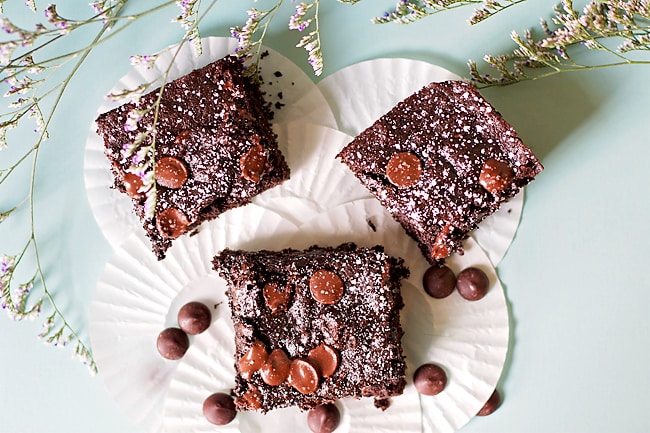