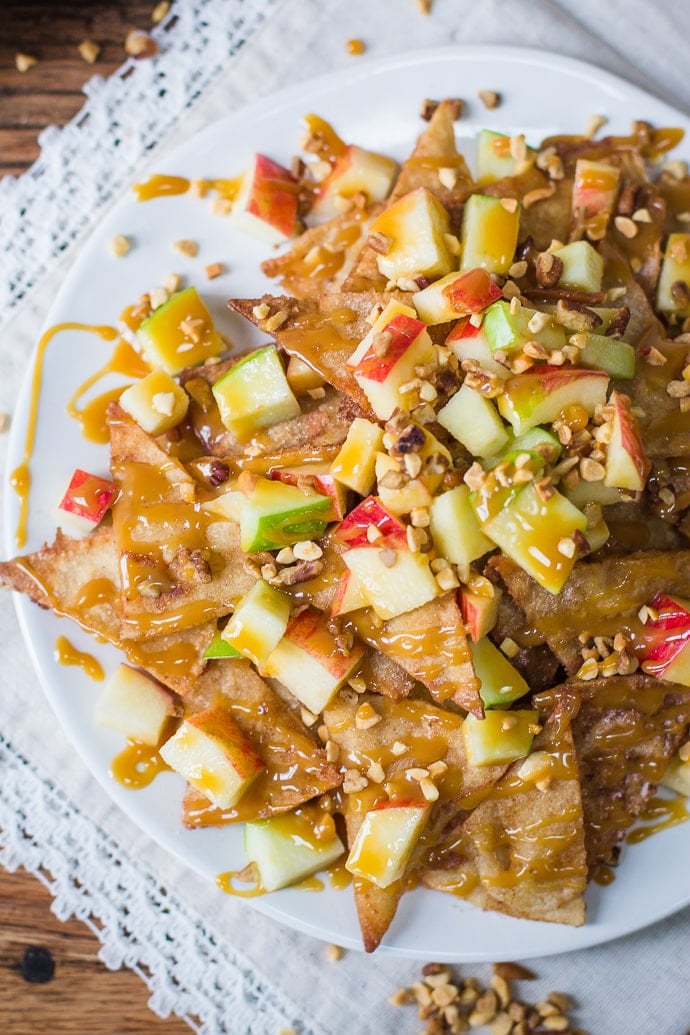 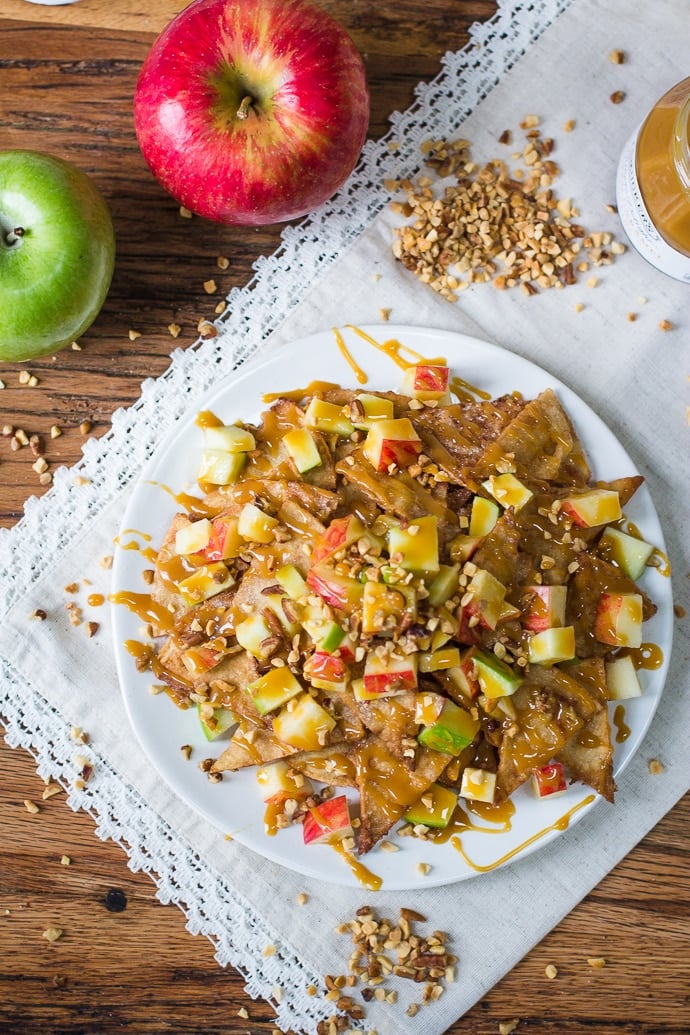 Guess what?? Today is NATIONAL NACHO DAY!! Seeing how nachos is one of my all time favorite dishes, I’m pretty excited about today.

Ya know what else today is?? The day that I play with my team at the WFTDA Roller Derby World Championships! We play at 10am cst today so depending on when you read this, our game might already be over. We won, I’m sure. The outcome of this game determines what time we play on Sunday but either way, our game will be played on ESPN 3! I’m pretty excited about that. So, if you’re interested, you can tune in to see me play on Sunday (time TBD). I’ll update my facebook page with the time so you can tune in :) 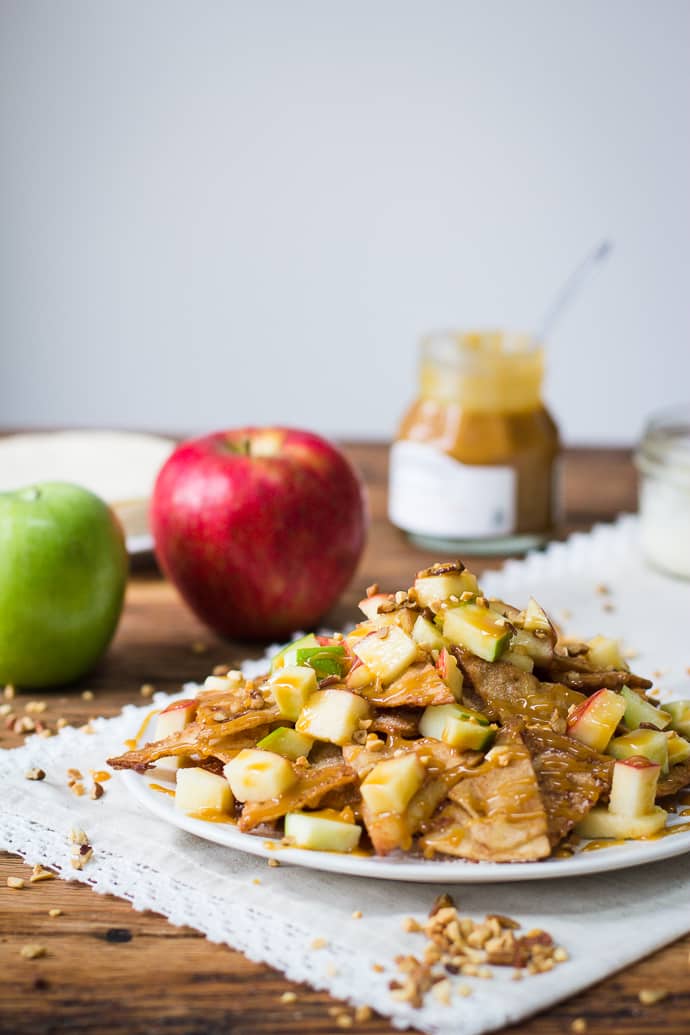 SO, National Nacho Day. As I said before, I LOVE nachos. I love brisket nachos, I love nacho fries, I LOVE breakfast nachos, and now I have a new found love for DESSERT NACHOS. Caramel Apple Dessert Nachos to be exact. I figured I’d combine nacho day with a little hint of autumn. 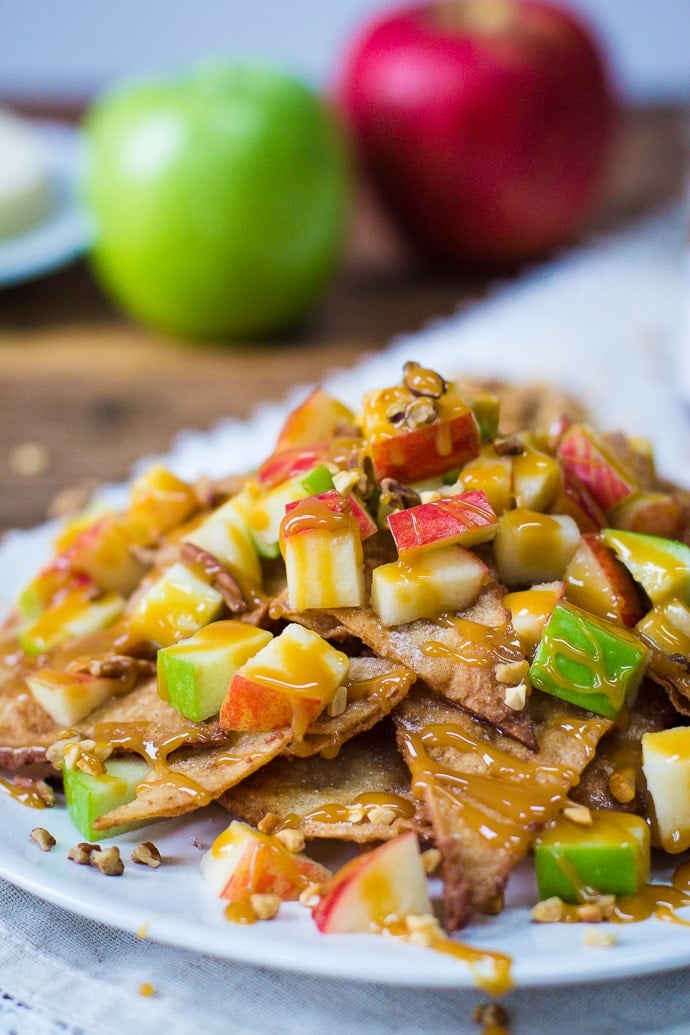 I thought the chips would be more difficult to make but they’re actually SUPER easy.

I cut the tortilla rounds into 8ths this time as opposed to quarters like I did with these nachos. 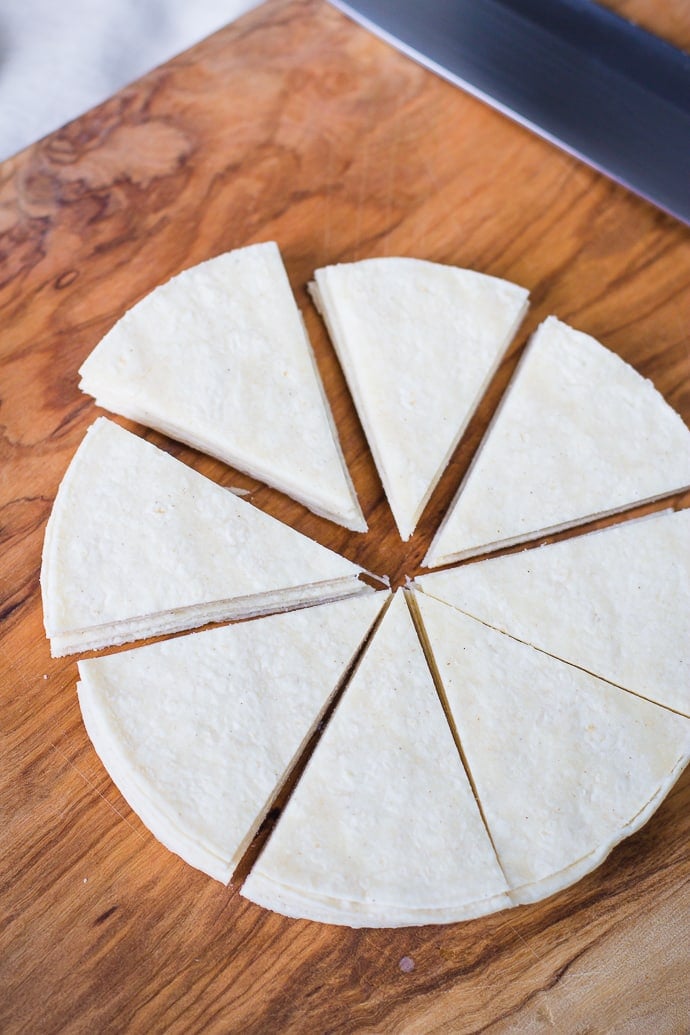 The tortilla triangles are then tossed with butter and eventually lots of sugar and CINNAMON. 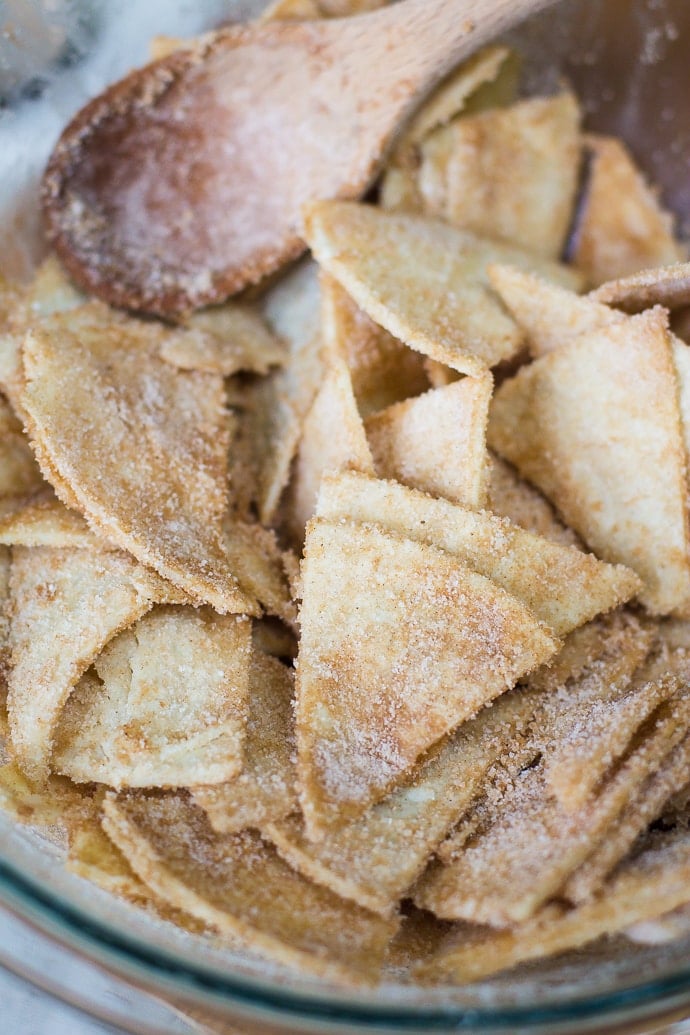 They’re then neatly (or not so neatly, whichever works best for you) arranged on a baking sheet and baked for 4 minutes on each side. 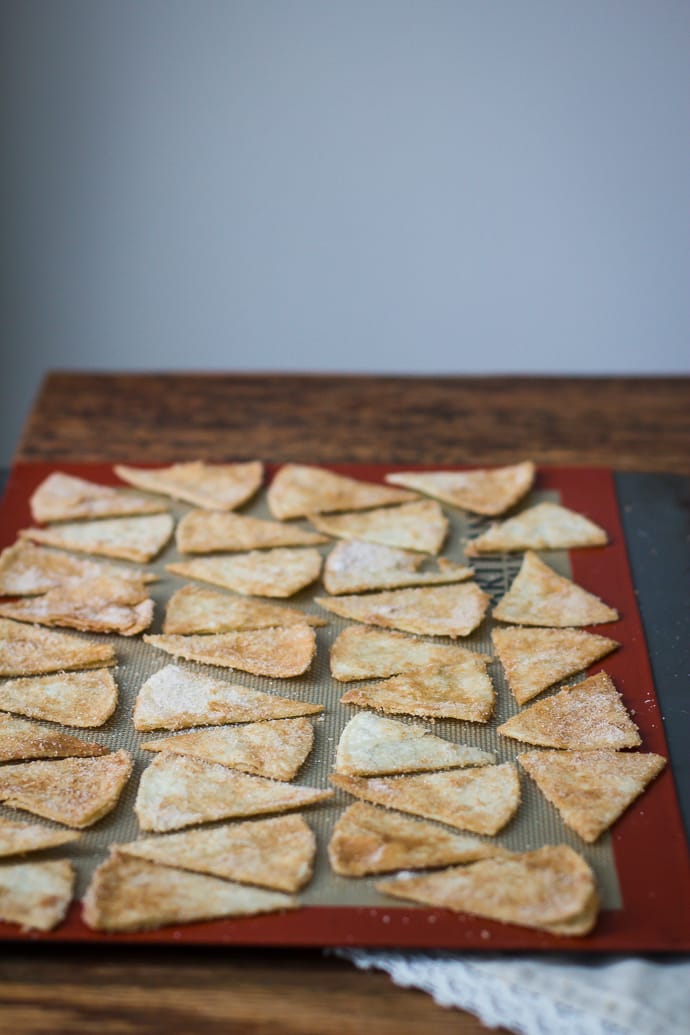 After 8-10 minutes, you won’t think they’re done. They’ll seem a bit limp still and maybe a little soggy. But trust me: have faith in the cinnamon sugar tortilla chips. Let them sit on the counter and cool for a few minutes and in no time, they’ll crisp RIGHT up. If you so desire, you can sprinkle a bit more sugar and cinnamon over the top (like I did of course).

The only think really left is to assemble the nachos. Start with the cinnamon sugar chips. 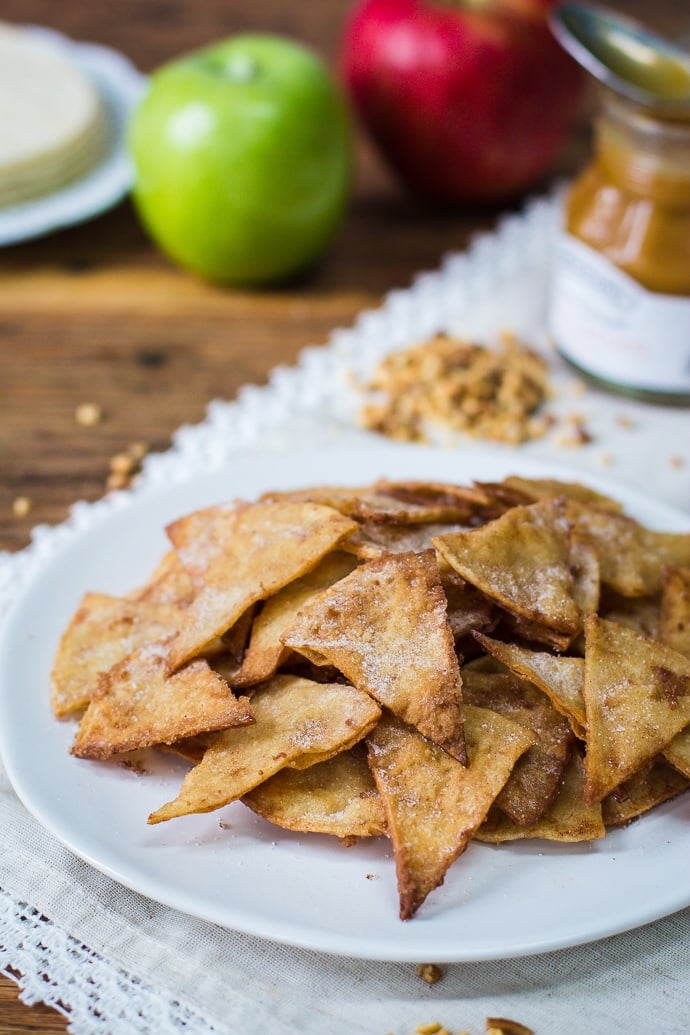 And simple top with all the fixins: creamy caramel, diced up apples, and a sprinkle of nuts. I had originally intended to put a bit of white chocolate on these nachos as well but then decided against it so that the caramel apple-ness was left in it’s true form (I mean, it’s true form in a nacho version). 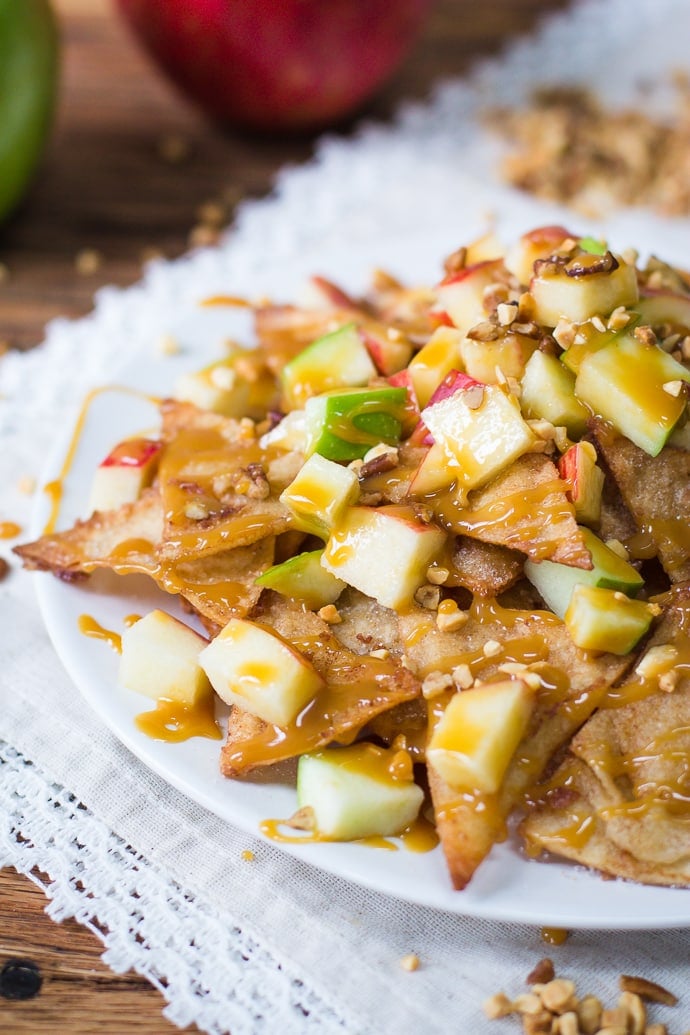 What’s the craziest thing you’ve ever put on your nachos?? Have you ever tried dessert nachos? 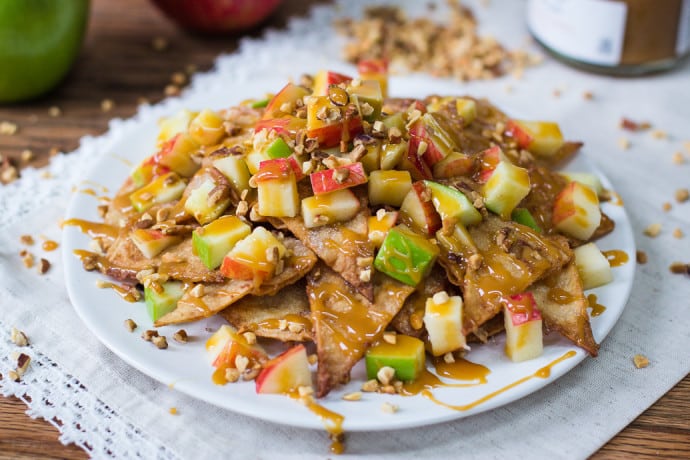