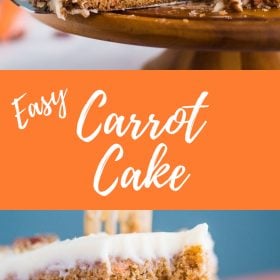 My Mother-In-Law’s Easy Carrot Cake Recipe is something that I have been making for years and it’s hands down the best carrot cake recipe ever! It’s made with cream cheese frosting and a *special* ingredient you might not expect. 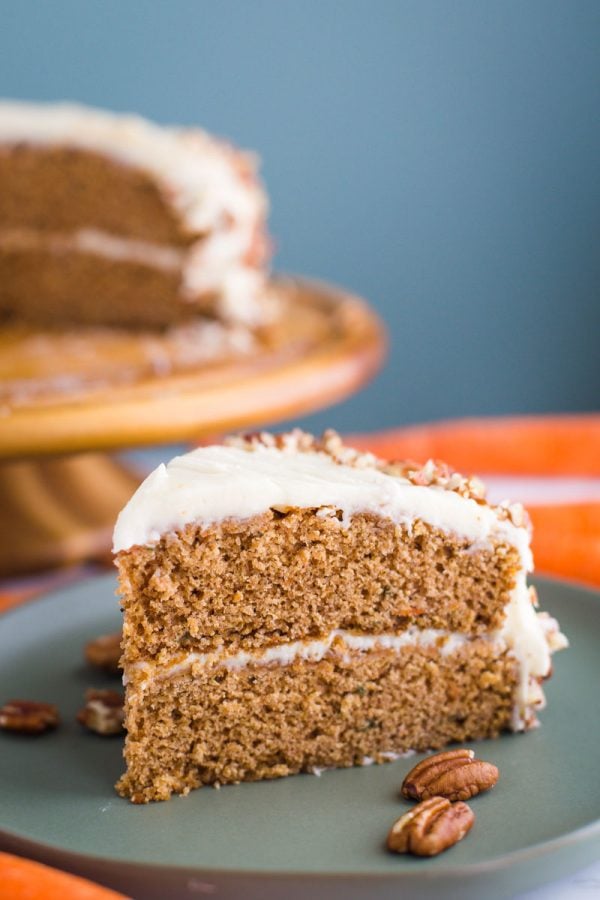 Oh HAY beautiful carrot cake of mine! I’ve been making this homemade carrot cake for quite a few years now but my mother-in-law has made it a few (a lot) more years than me. She got the recipe from a Southern Living magazine decades ago and, from my understanding, has been making it on a semi-regular basis ever since.

Stephen mentioned to me *several* times that his mother makes “the best carrot cake recipe EVER”. A few years after being together and after hearing him talk about this cake so much, I finally asked her for the recipe. I made it for his birthday several years ago and have been doing so every year since then. 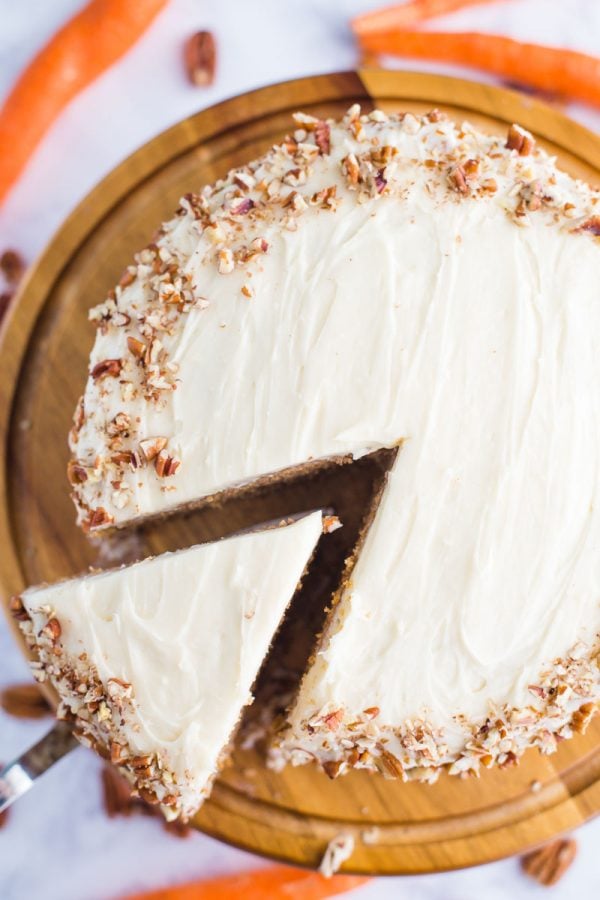 It has a special ingredient that seemed SO strange to me when I first saw the recipe. BUT it has grown on me since then. The secret carrot cake ingredient: baby food! ? CARROT baby food. So, bear with me for a minute because I too thought the baby food was so bizarre. If you buy the right kind, all you’re really adding to the cake is pureed carrots with a little bit of water added in.

Something else that you should know: I’ve tweaked this recipe a decent bit to make it my own. The original Carrot Cake Recipe calls for 2 jars of the baby food. I swapped out one of the jars for freshly grated carrot because that just seemed right to me. There’s fresh carrot in every bite of this easy carrot cake and I LOVE it. 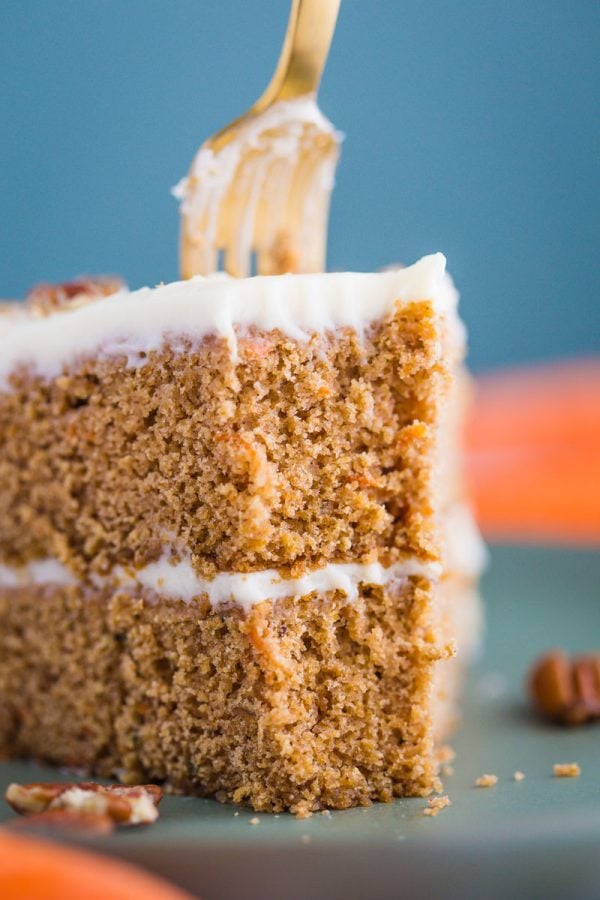 I also swapped the vegetable oil for coconut oil. It just seemed to make sense to me since carrot cake is often served with a bit of coconut. I didn’t actually add any other coconut to this BUT the coconut oil adds just the *slightest* bit (like,  you almost wouldn’t know it was there) of coconut taste to the cake that I like. 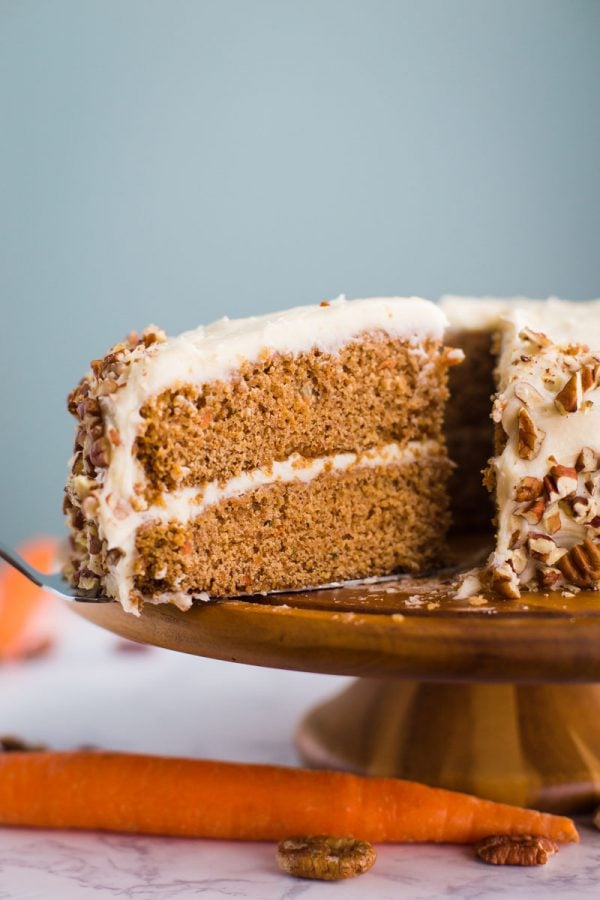 How to Make Carrot Cake

There’s nothing too frilly about this easy carrot cake recipe.

The whole thing (minus the frosting) is made in the bowl of a stand mixer which means that clean up is super quick and easy!

First the sugar and the oil is beat together. Then the carrots, eggs and vanilla are mixed in before the dry ingredients are then added in. Then all you do is divide up the batter into cake pans and then BAKE. DONE.

If desired, you can make the cake layers in advance and then freeze them. They would easily last in the freezer for a few weeks. When ready to assemble and add the frosting, you can simply leave the cakes on the counter for a couple of hours to thaw and then proceed as usual. 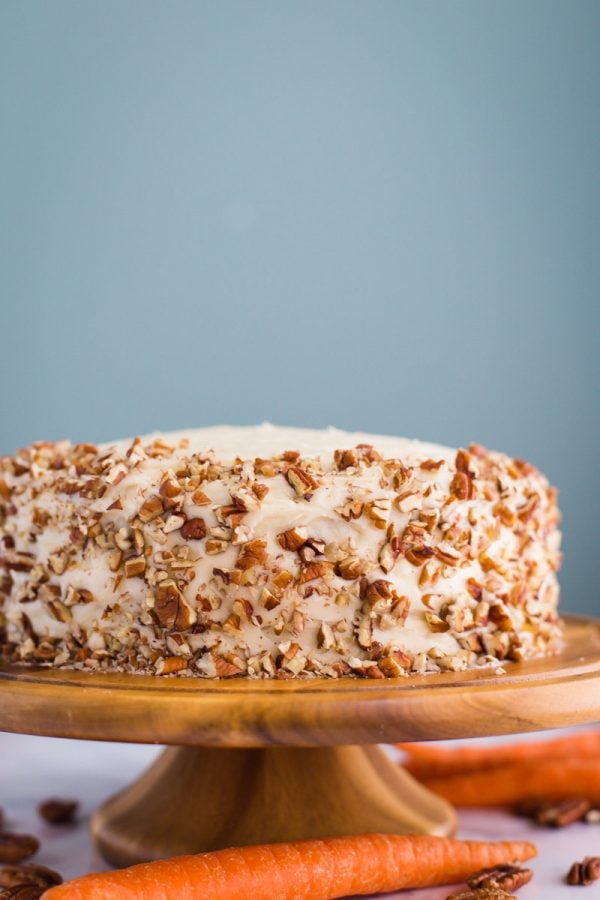 How to Make Cream Cheese Frosting for Carrot Cake

The cream cheese frosting is easy to throw together! Everything is mixed together in one bowl and beat together until light and fluffy and delicious!

After the cake is iced, you can add some pecans if you’d like. I really like them with my carrot cake but also, I kind of just love how them make the cake look :) I’ve made this cake with whole pecans lined up around the base of the cake but more often than not, I chop up the pecans pretty fine and sprinkle them around the sides and on the top just a bit.

My Mother-In-Law’s Easy Carrot Cake Recipe is something that I have been making for years and it’s hands down the best carrot cake recipe ever! It’s made with cream cheese frosting and a *special* ingredient you might not expect.

For the carrot cake:

For the cream cheese frosting:

Adapted from an old print issue of Southern Living magazine.