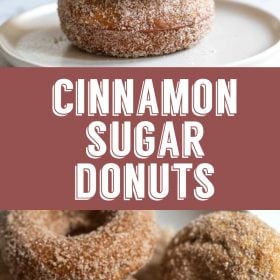 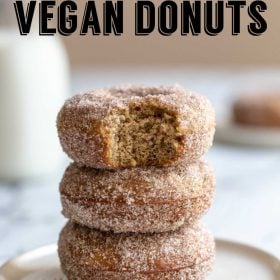 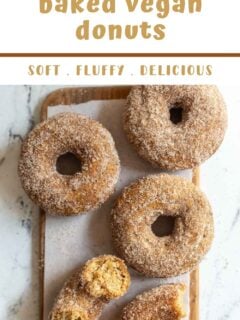 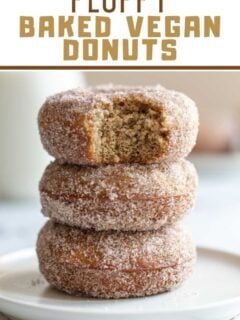 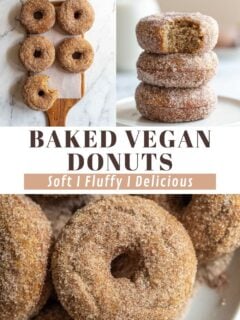 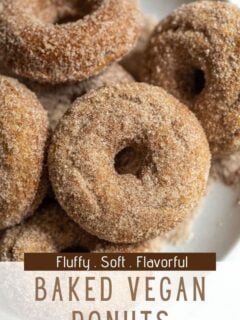 If you’re looking for a healthier donuts recipe then look no further than these EASY Baked Vegan Donuts because these are plant based and so so delicious! The cinnamon sugar coating is optional if you want to keep these a little on the lighter side.

I recently made a donut recipe video for a client and it renewed my love for donuts. I have a Pumpkin Vegan Donuts recipe on my bog but really wanted to have a simple vegan donuts recipe that’s good all year around (NOT at all saying that you can’t eat pumpkin all year…you do you :D).

I wanted these to be on the healthier side of life (maybe we’ll make a fried donut recipe soon too), so today we’re making VEGAN BAKED DONUTS. But not only are they lighter, they’re also much easier than fried and I love them for that!

I coated these in a cinnamon sugar coating which I TOTALLY realize largely negates the other lighter ingredients in these baked donuts. But, I’m okay with that :)

Obviously, you can leave off the cinnamon sugar coating OR just add a much lighter coating of it. There’s no wrong way to do this and I love how versatile these are.

Like most donuts, these don’t stay good for more than about a day and are best enjoyed soon after baking. I made the recipe so that it only makes 6 donuts but feel free to double the recipe if needed. Don’t forget- there’s an option in my recipe card (on the right side at the top) that will automatically double or even triple the recipe for you!

How to make this Vegan Donut Recipe:

First up, let’s go over the ingredients for these donuts:

I’ve been LOVING oat milk lately so I also tried making these with that and it turned out great.

If you’re looking for a substitute for the banana (because I KNOW I will get asked about this), my best suggestion is apple sauce.

To make these homemade baked donuts, we’re simple going to mix ALL of the ingredients together (minus the cinnamon sugar coating obviously) in one large bowl until combined. Wait, did I mention that this is a ONE BOWL RECIPE!?

From there, I like to put the batter into a baggie so that it’s easier to evenly squeeze into the donut pan. However, you can also just scoop the batter in with a spoon. Then simply bake it for about 15 minutes and they’re DONE.

If you want to add a cinnamon sugar coating, simply mix together the cinnamon and sugar. To help the sugar stick better, I lightly spray the donuts with cooking spray and then toss them in the sugar.

How to make these Baked Vegan Donut Recipe that are fluffy and DELICIOUS and come together in just one bowl!

For the cinnamon sugar coating: