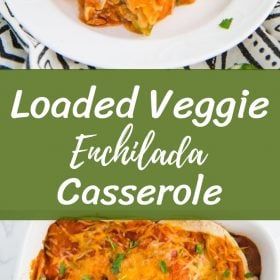 This Loaded Veggie Enchilada Casserole Recipe is a delicious take on traditional enchiladas. An easy dinner that is vegetarian and can even be made into a vegan enchilada casserole if you just leave off the cheese! 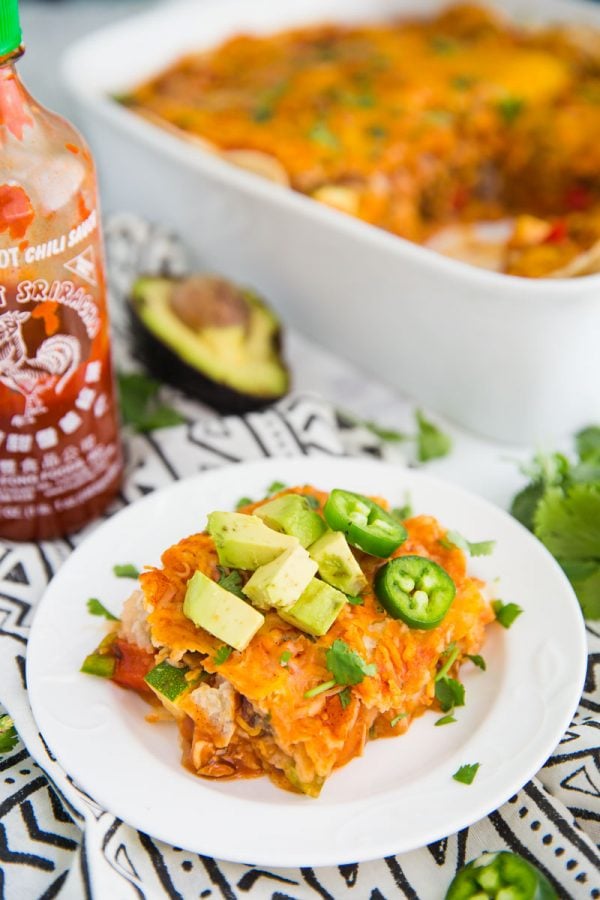 Guys. Jemma is going through some kind of weird sleep regression and it’s just about killing me. All of a sudden, she decided her bed time is now 9-9:30pm instead of her usual time of 7-7:30. The loss of those 2 hours in my evening is really catching up to me. And the lack of good sleep at night too. At 10 months old with no teeth in sight yet, I’ve concluded that it MUST be teething. Hoping it passes soon because I haven’t slept through the night since before she was born and I would really like to make that happen soon.

If your baby is an amazing sleeper, I do not need to know about it. I’m somehow happier thinking that everyone with a baby is going through the same thing as me. Tired mom logic. 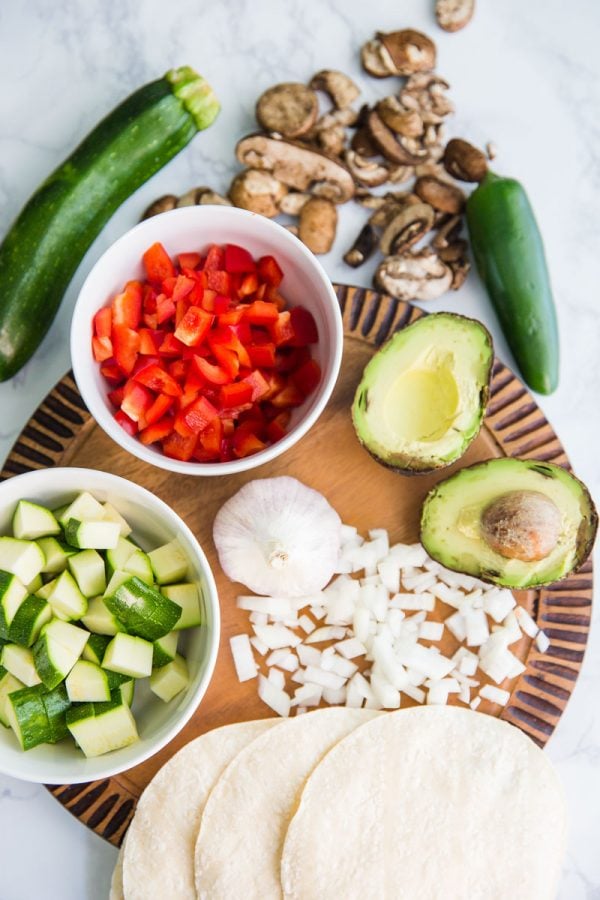 Today we’re diving into this LOADED VEGIE ENCHILADA CASSEROLE RECIPE! Sorry to yell, it’s REALLY good and I’m excited to share it! This recipe is a casserole version of my Veggie Vegan Enchiladas which is one of my all time favorite vegan recipes on the blog. Not that rolling up enchiladas is super difficult but there’s something satisfying about throwing everything into a casserole dish that just makes dinner a bit less daunting.

Once you get past all of the veggie chopping, this Loaded Veggie Enchilada Casserole recipe is ridiculously easy. Like I said, dump it all in in a relatively organized fashion and throw it in the oven for 50 minutes.

I spent HOURS shooting and editing a really pretty gif for you only to realize that it’s just too big to upload to my site without massively slowing it down. So here it is in video form instead :)

When I first tested this recipe and made that gif, I didn’t put any enchilada sauce on the bottom of the dish. This resulted in the bottom tortillas being a bit too dry so the recipe has been updated to reflect that.

I also used store bought enchilada sauce for this recipe because I was feeling a little on the lazy side. BUT I do have a great recipe for Homemade Enchilada Sauce that I highly recommend if you’re up for it! 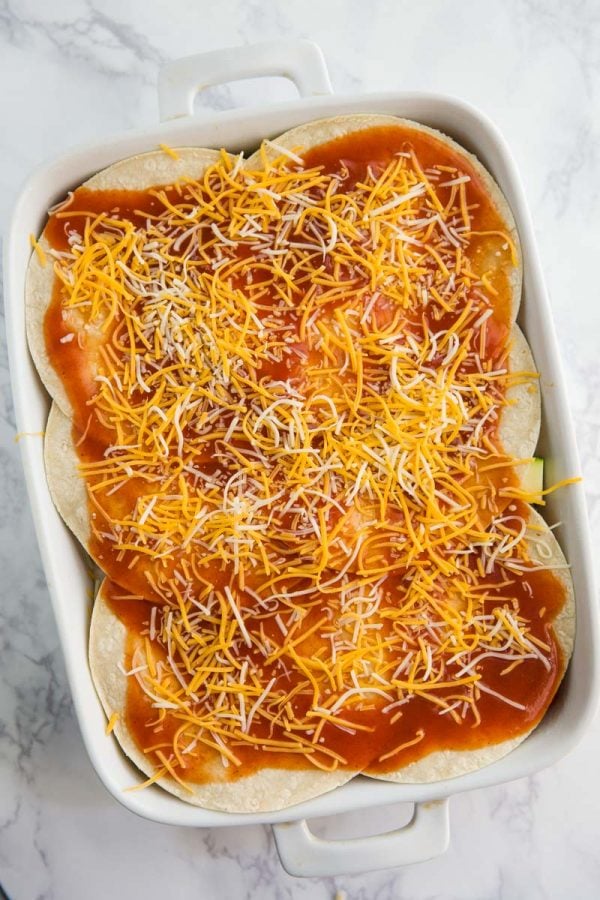 How to Make This Loaded Veggie Enchilada Casserole Recipe

Once you’ve gotten through chopping all of the veggies (I’m not going to lie, it takes a minute), the enchilada casserole comes together rather quickly. We start with a base of enchilada sauce, then 6 tortillas overlapping each other. Half of the beans, cheese and veggies are loaded in before more sauce is added and the whole process is repeated with the remaining veggies and beans. The casserole is then topped with 6 more tortillas, the remaining sauce and cheese and baked in the oven for about 45-50 minutes. 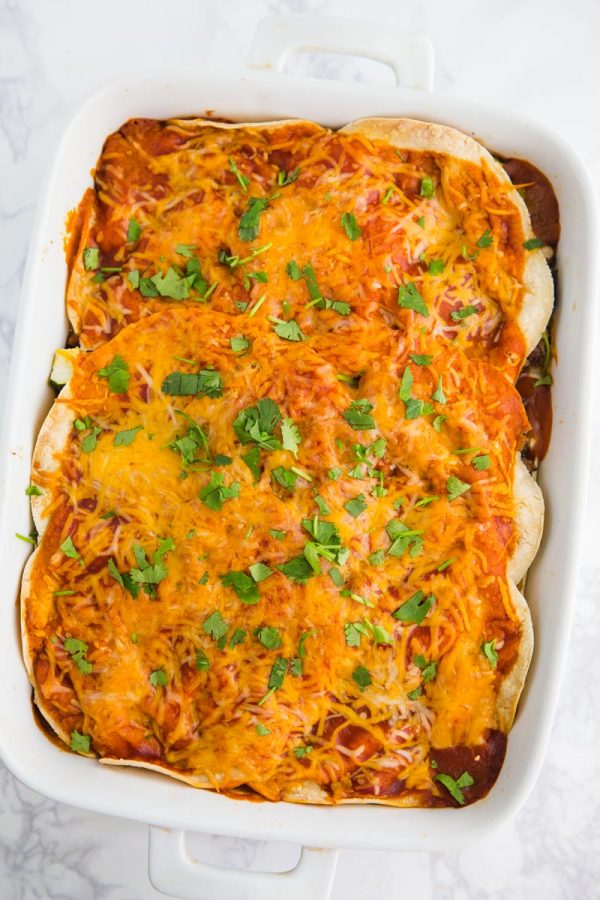 In other unrelated news, I’m filming my first cooking show style recipe video this week and I’m really excited to share it with you! And nervous. Kind of nervous. Making videos of just my hands is one thing but getting on camera (ie, having to put real clothes and make up on) and talk eloquently is a WHOLE NEW THING. Wish me luck :)

This Loaded Veggie Enchilada Casserole Recipe is a delicious take on traditional enchiladas. An easy dinner that is vegetarian and can even be made into a vegan enchilada casserole if you just leave off the cheese!

Pre-heat your oven to 375 degrees F. Spray a 9×13 casserole pan with cooking spray.

In the bottom of your dish, pour in 2 tablespoons of the enchilada sauce and spread it out so that it just covers the bottom of the pan.

Top the casserole off with 6 more tortillas as well as the remaining enchilada sauce and cheese.

Bake in the oven for 45 minutes.

Once ready to enjoy, top with optional avocado, jalapeno, sour cream and whatever else you love on top of your enchiladas! 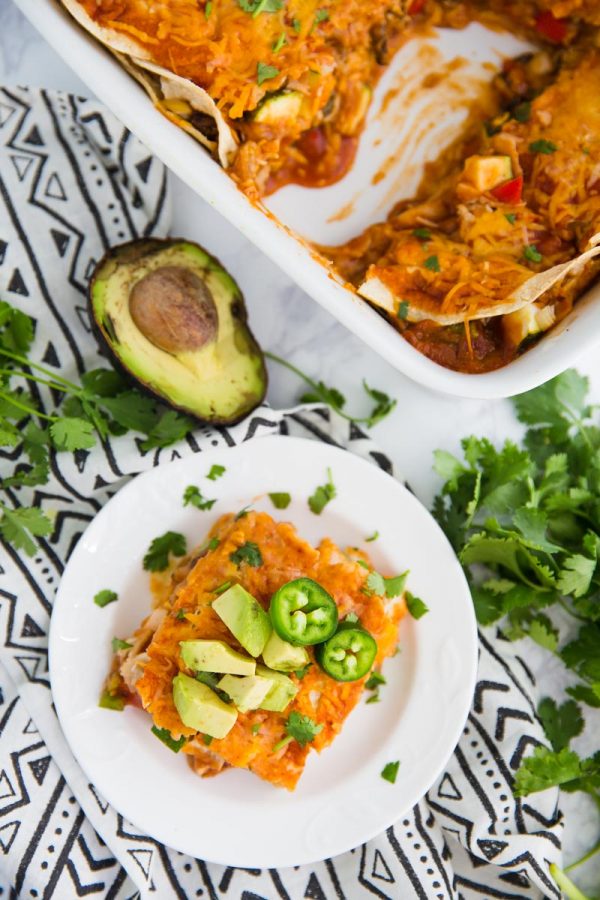