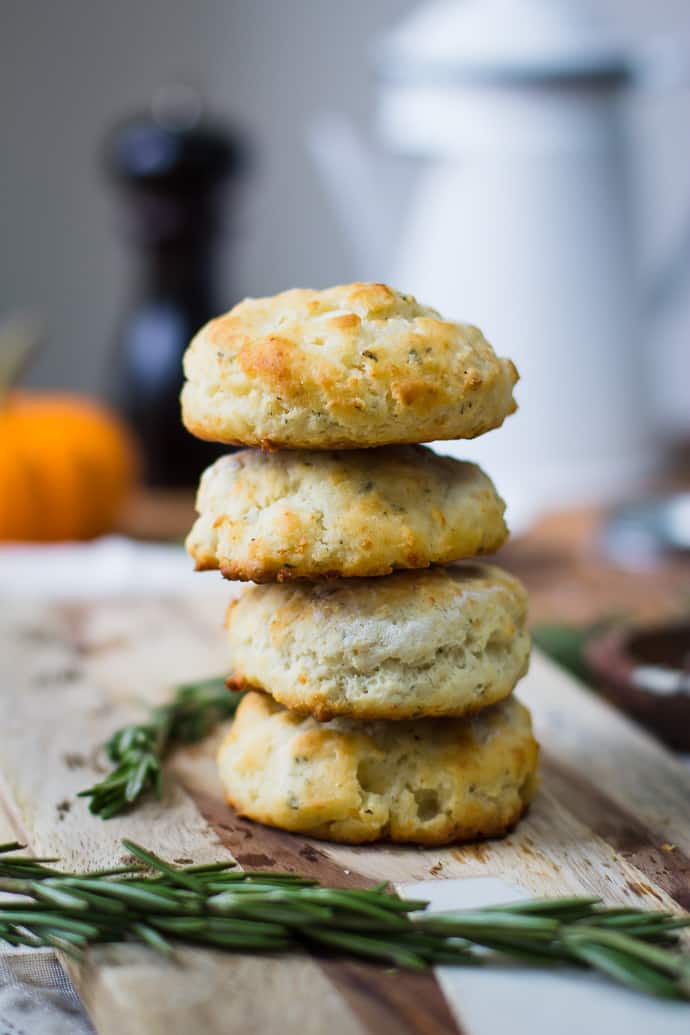 Oh look, here I am with yet another rosemary recipe. Is 3 in a row just too much? 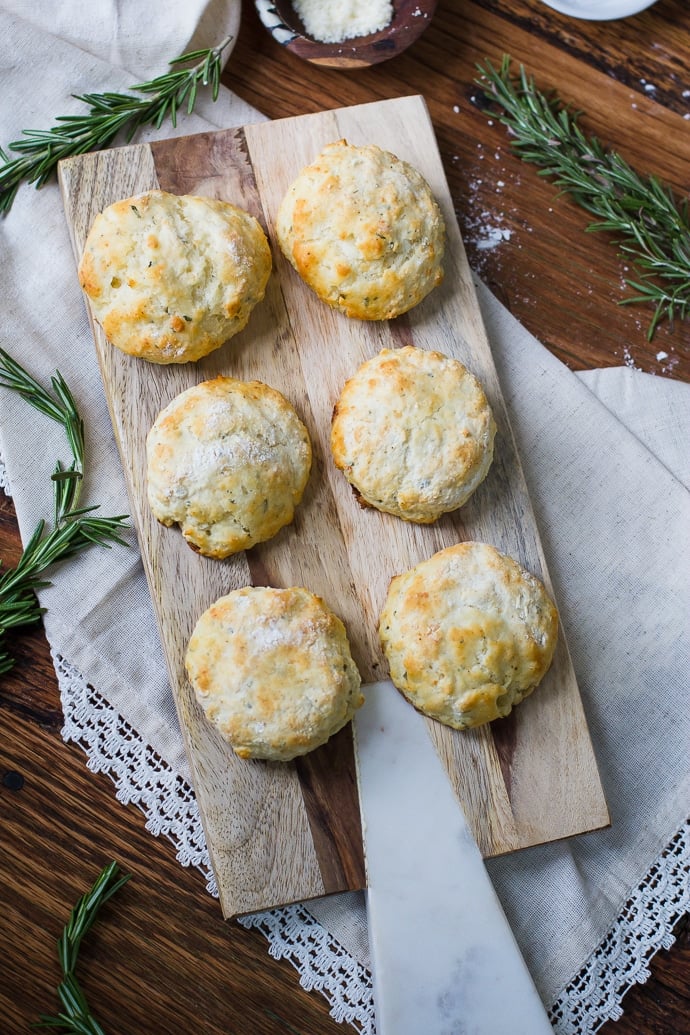 But don’t worry. I won’t ramble on about my love for rosemary for too long today because it’s Monday morning and I didn’t get half of the things done over the weekend that I meant to. It was rainy and cold here in Nashville. So cold that Stephen even got out of bed on Saturday morning to turn the heat on. So, we stayed inside for as much of the weekend as possible. I did lots of baking and the puppies did lots of sleeping. 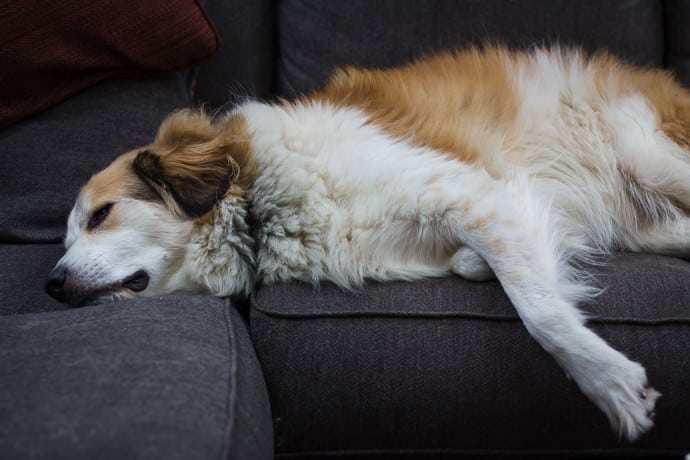 I also spent an abnormally long time this weekend researching the proper ways to plant and care for apple trees. So, all-in-all a productive weekend.

In other news: it took the chickens an entire week to realize that the fence I rigged up to keep them out of the garden is seriously flawed and if they climb through the bush, they can easily escape. So, that’s next weekends project. 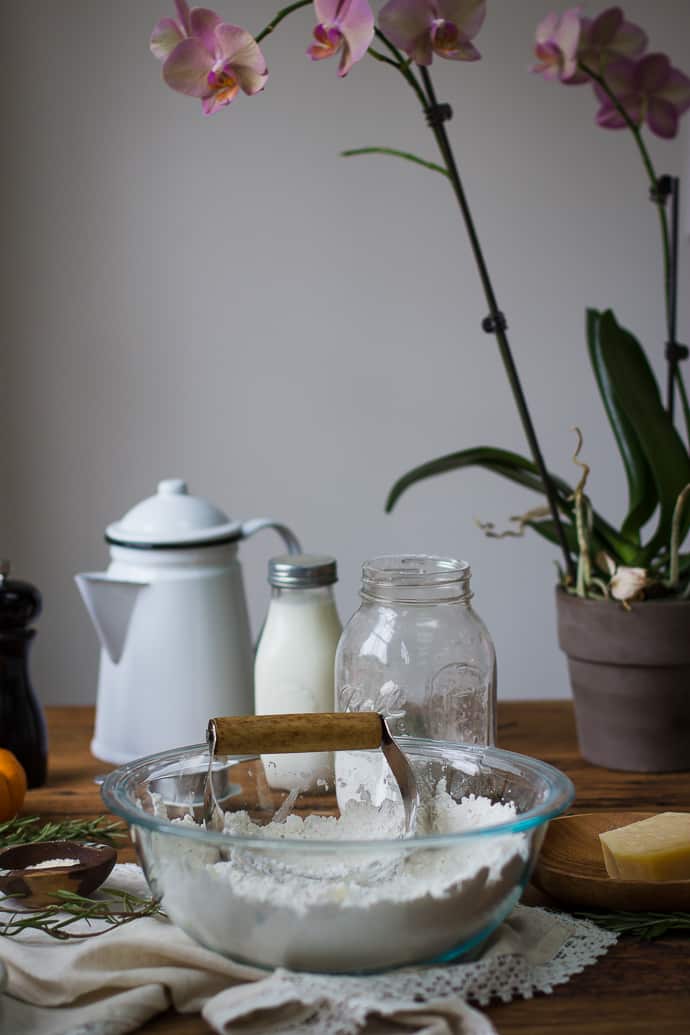 But for now, we have these Rosemary Parmesan Buttermilk Biscuits. These biscuits were inspired by Molly Yeh’s Parmesan rosemary biscotti that I’ve been drooling over for the past year. I’ve had this recipe saved for so long as a reminder that I wanted to create my own version of rosemary + Parmesan in a baked good. That’s what we have today and it’s glorious. 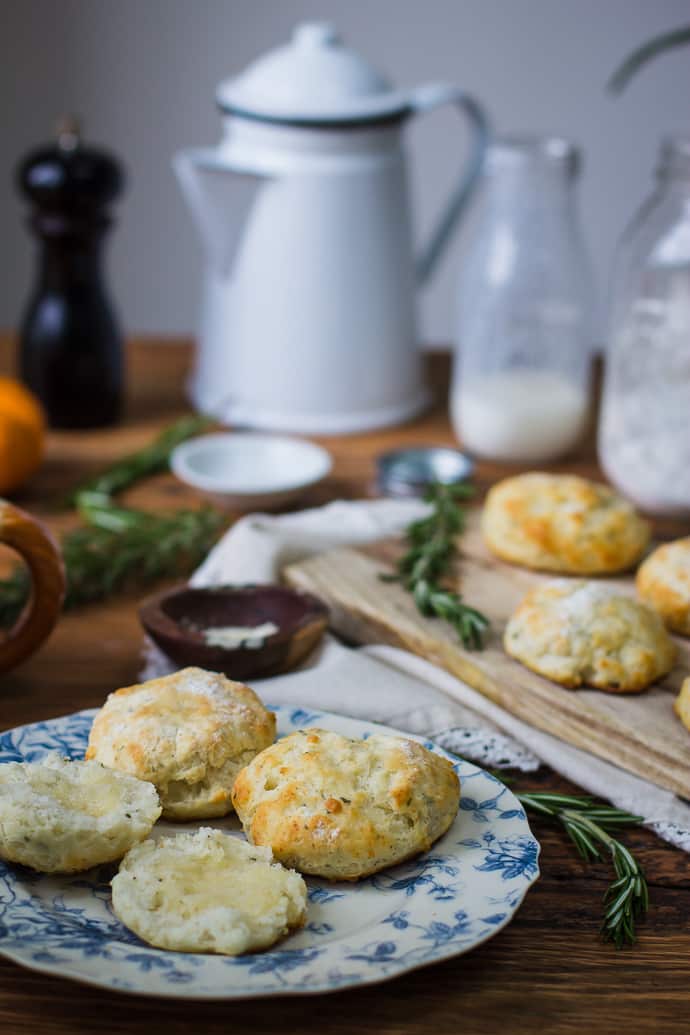 The nice thing about a Saturday morning when you have no where to be is that you can cook breakfast slowly while sipping on cup after cup of some good coffee. I magically enjoy getting up early on the mornings when I don’t actually have to be anywhere and the only matter of importance is releasing the squawking chickens from their coop and feeding the hungry dogs. 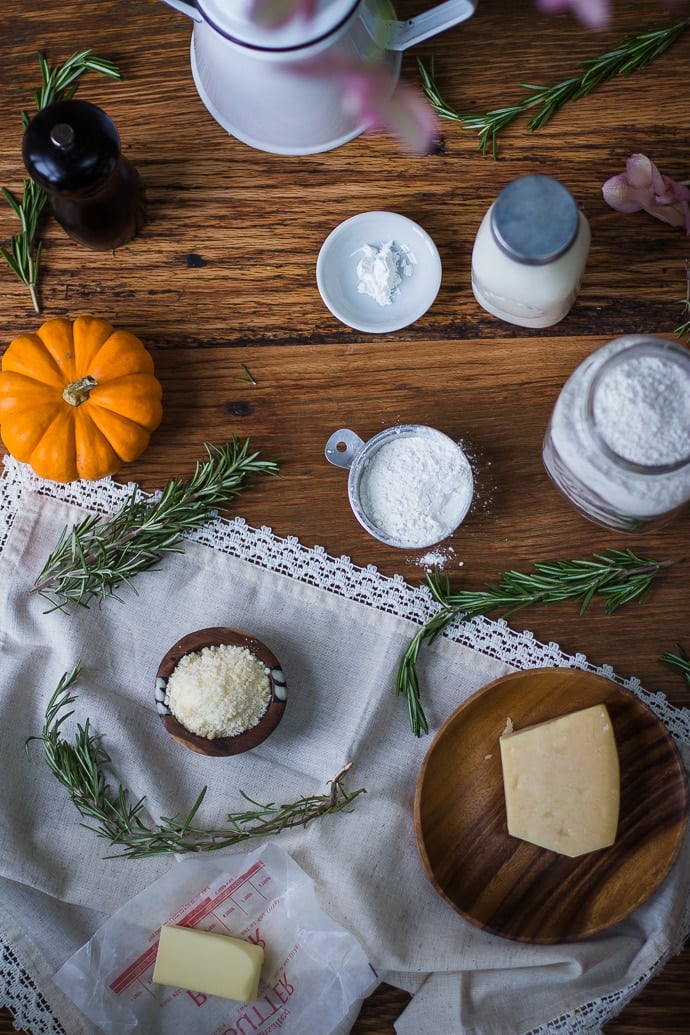 And the coffee tastes a little better when you’re drinking it out of an uber cool mug that you got at walmart. 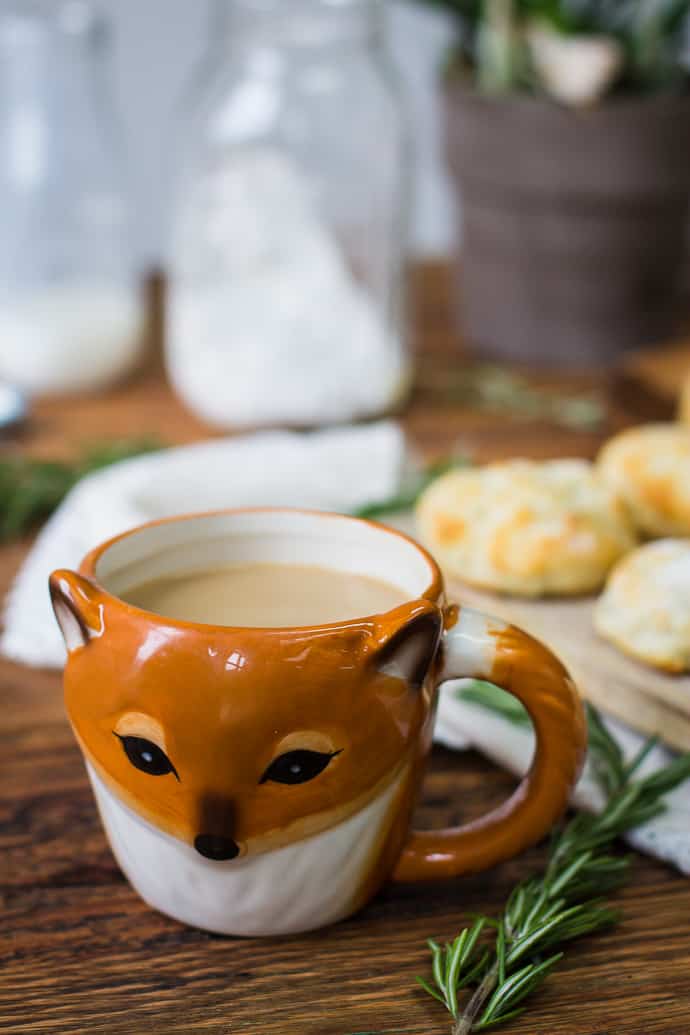 I made these biscuits slowly, not that they take long to make at all.

We start with fresh rosemary. You could use dried rosemary for this but I highly recommend you go and plant yourself a rosemary plant anywhere around your house, let it grow uncontrollably and use it to add fresh rosemary in everything. 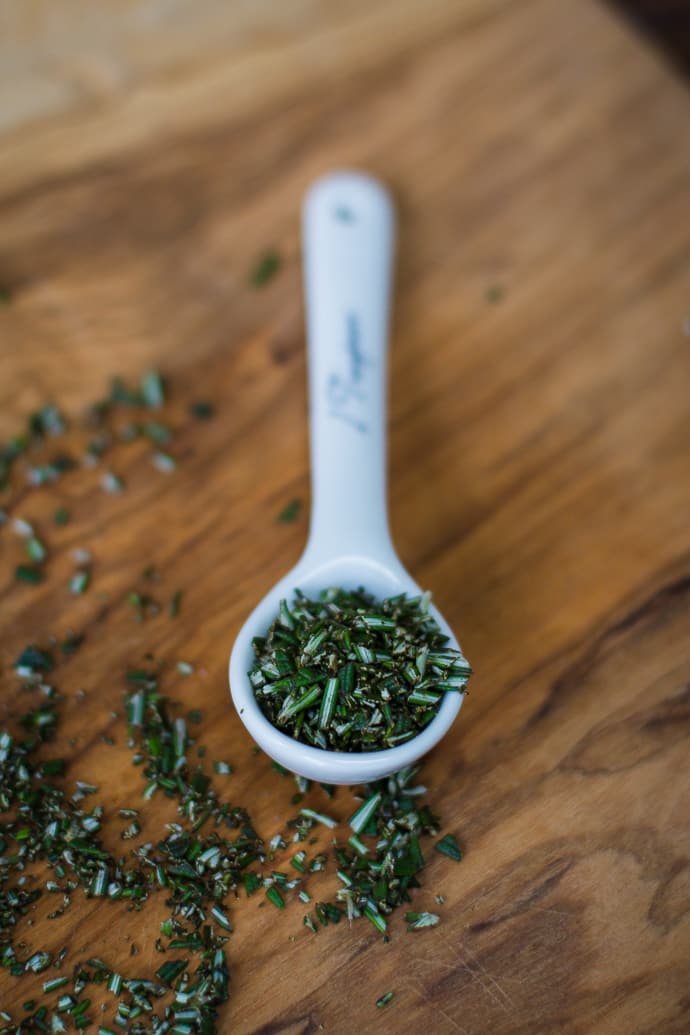 The yummy rosemary is whisked into the flour, baking powder, S&P, and Parmesan CHEESE. 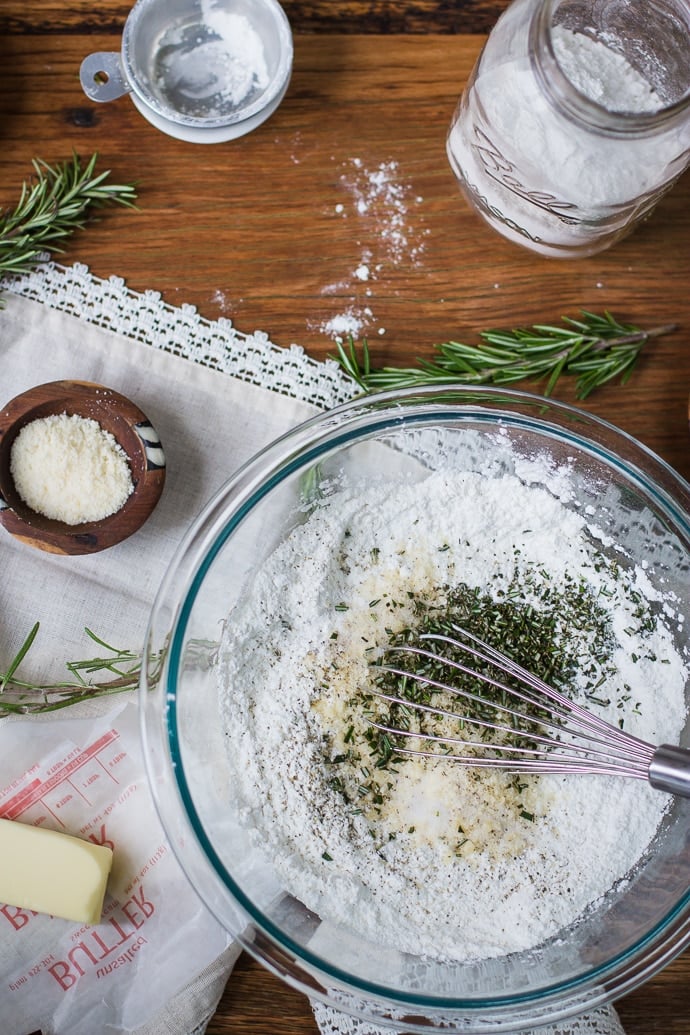 Frozen bits of butter are added into the flour mixture 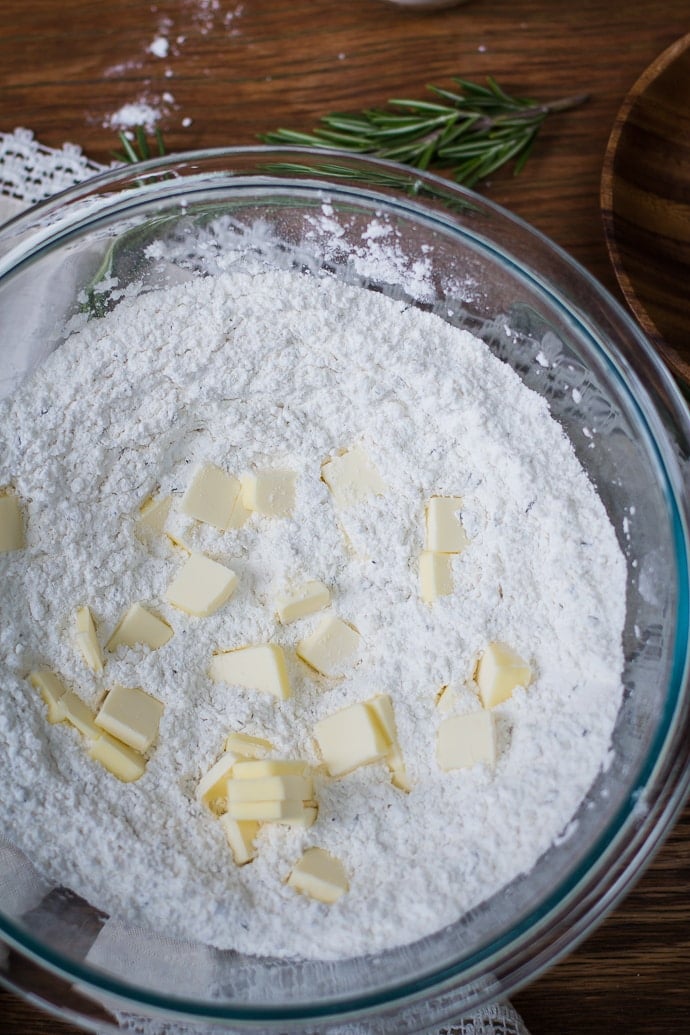 And then incorporated into the dry ingredients. I used a hand blender for this but I’m also a big fan of the food processor method. 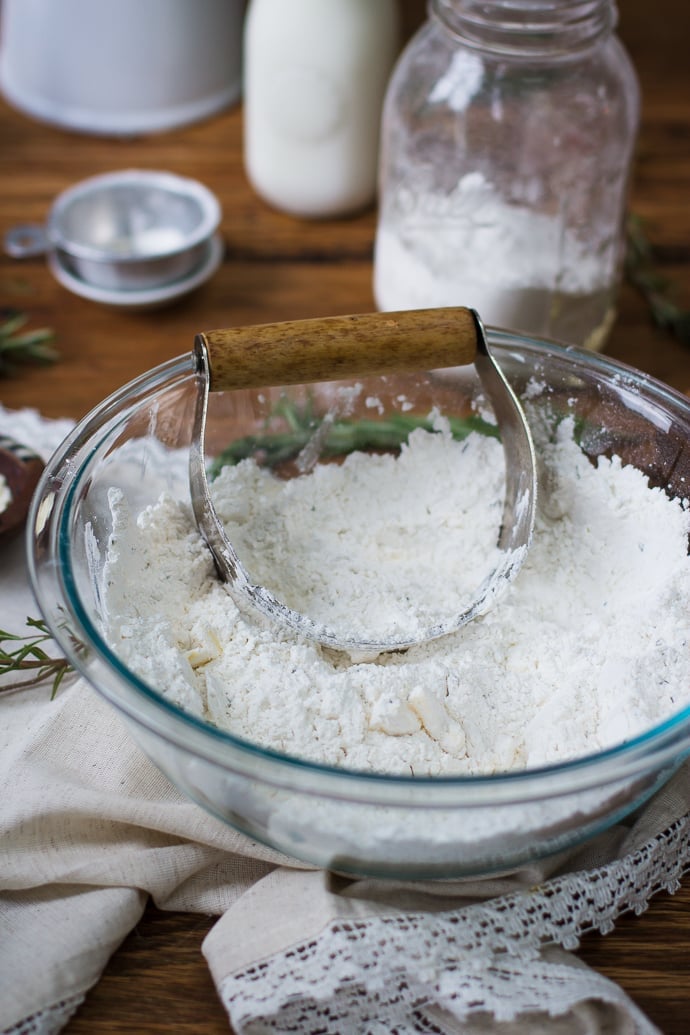 After a short rest in the freezer, some creamy buttermilk is added and gently stirred in. 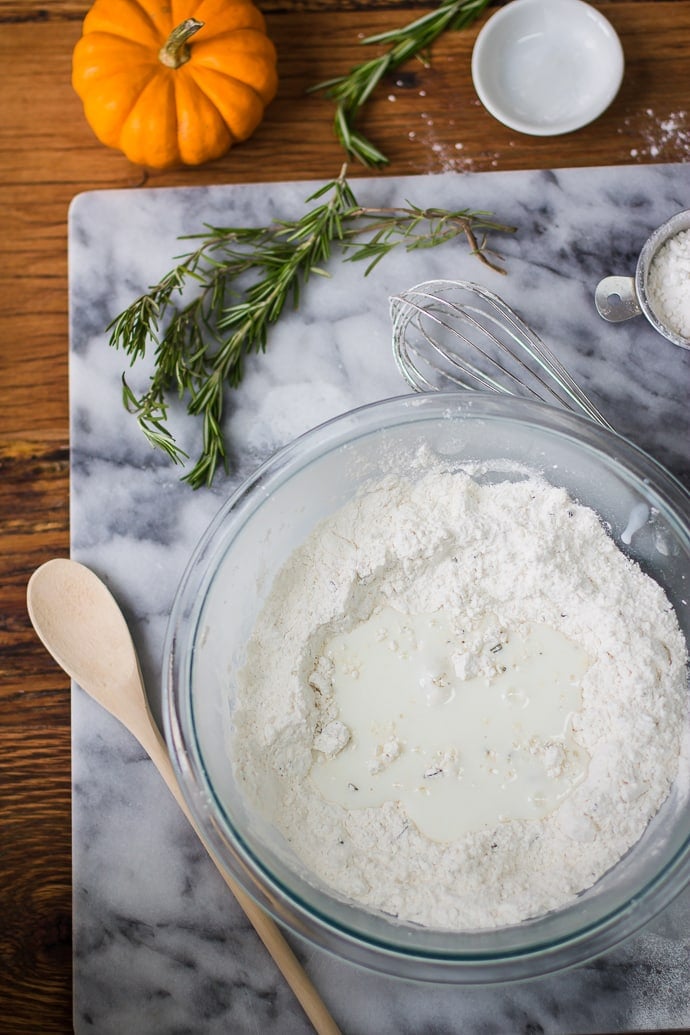 Once a nice ball of dough has formed, it can be patted out to a circle. Don’t roll it out, just pat it with your fingers. Be gentle and love the dough. 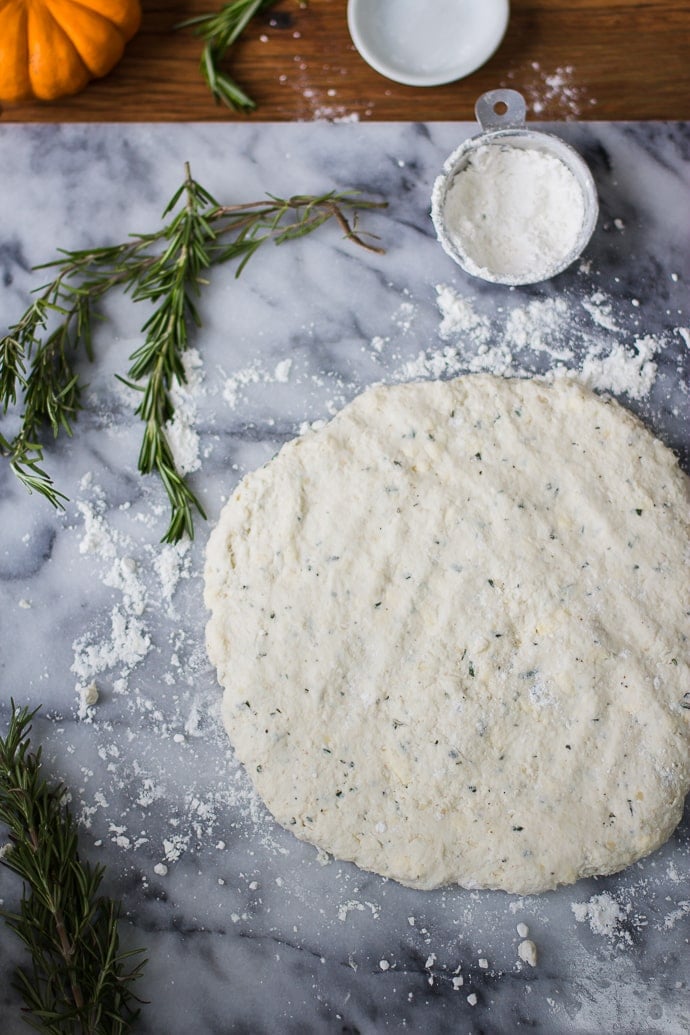 ah, look at those nice flecks of rosemary….

I made mine a little on the thinner side (about 1/2 in thick dough) but more traditional biscuits have the dough at about 3/4 of an inch thick.

I also, apparently, don’t own a biscuit cutter. Or, it got lost in the move or something. SO, I improvised. Mason jars aren’t ideal but it got the job done and in proper size. 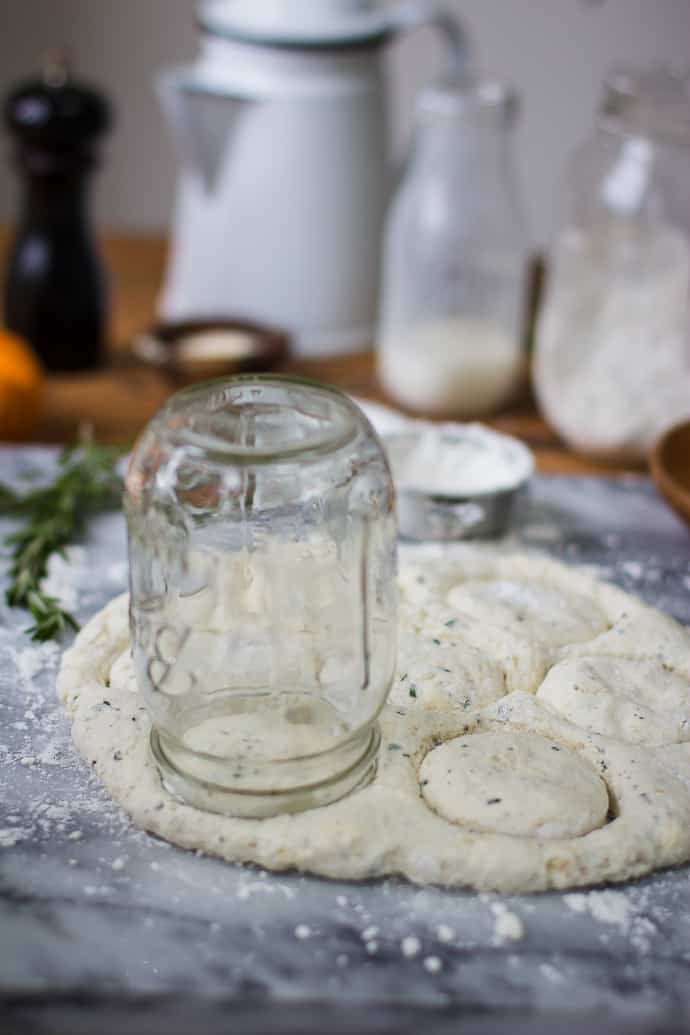 Cut out as many biscuits as possible. 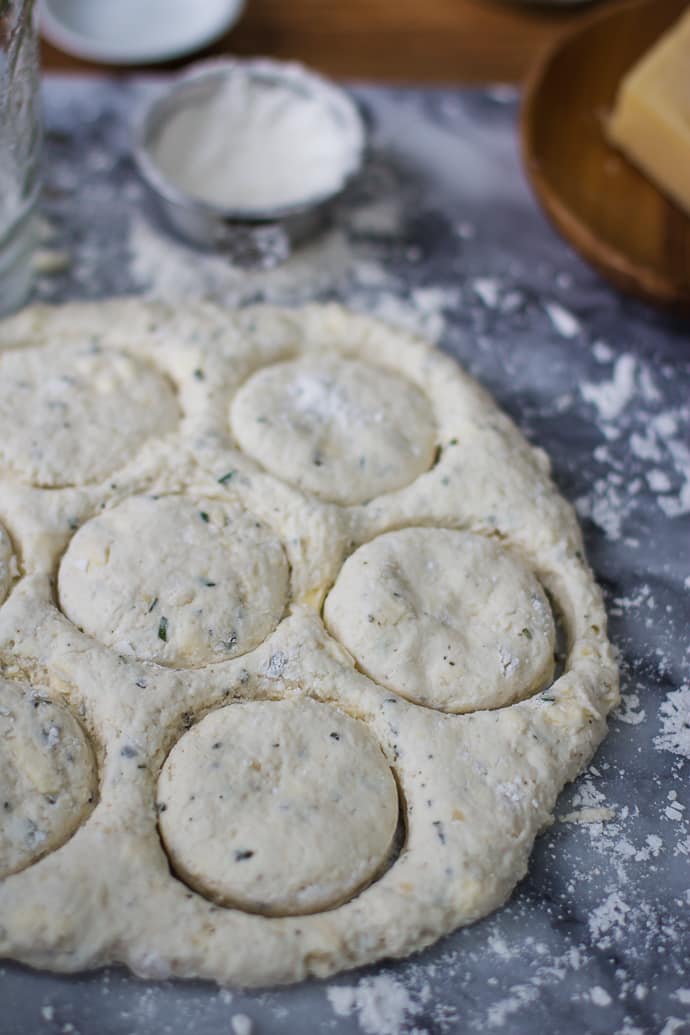 Then roll up the dough and repeat the process again until you’re out of dough. 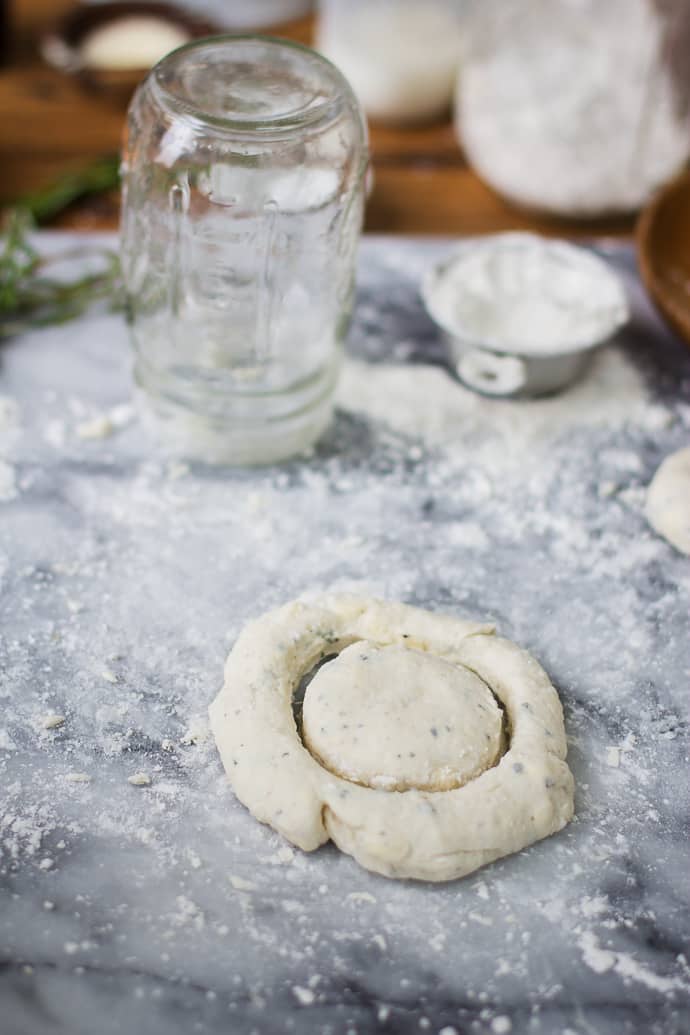 I attempted to make a heart shaped biscuit with the last little bit of dough. It’s a special heart. 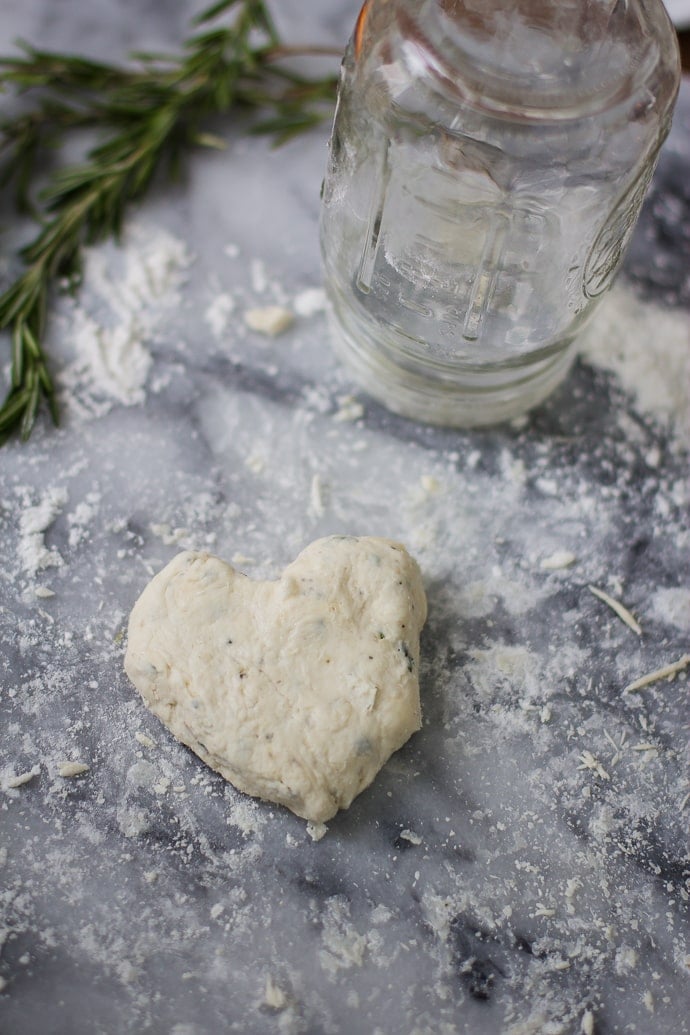 I bake my biscuits at a higher temperature for a shorter time to result in maximum flakiness. 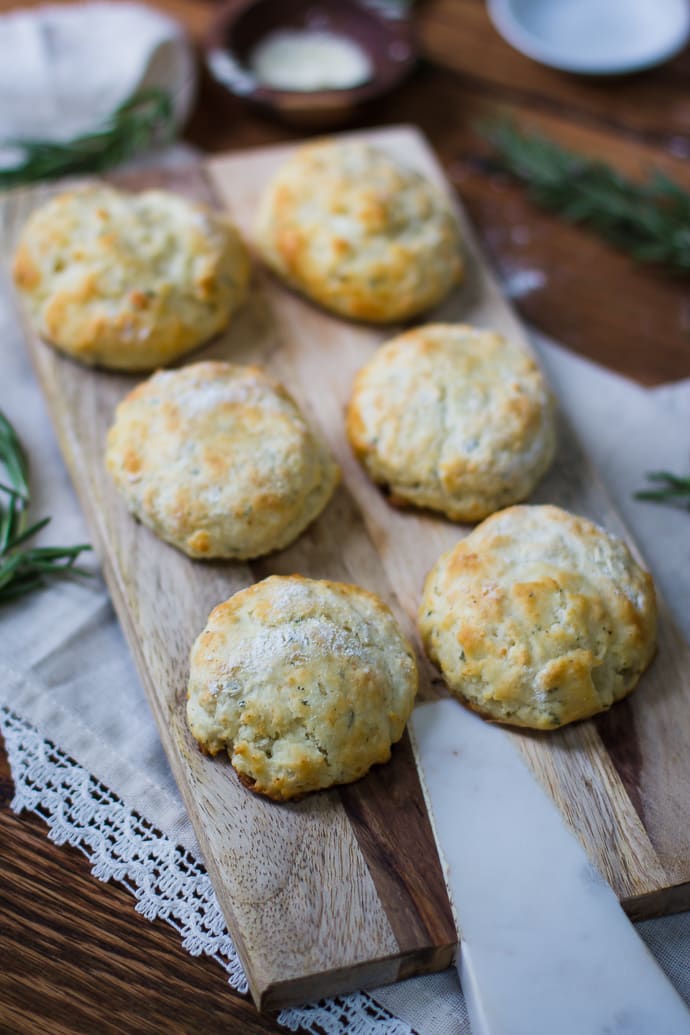 I baked these in 2 batches and for the second bath, I sprinkled a tiny bit more cheese on top of each biscuit as well as a bit more chopped rosemary. I highly recommend this! 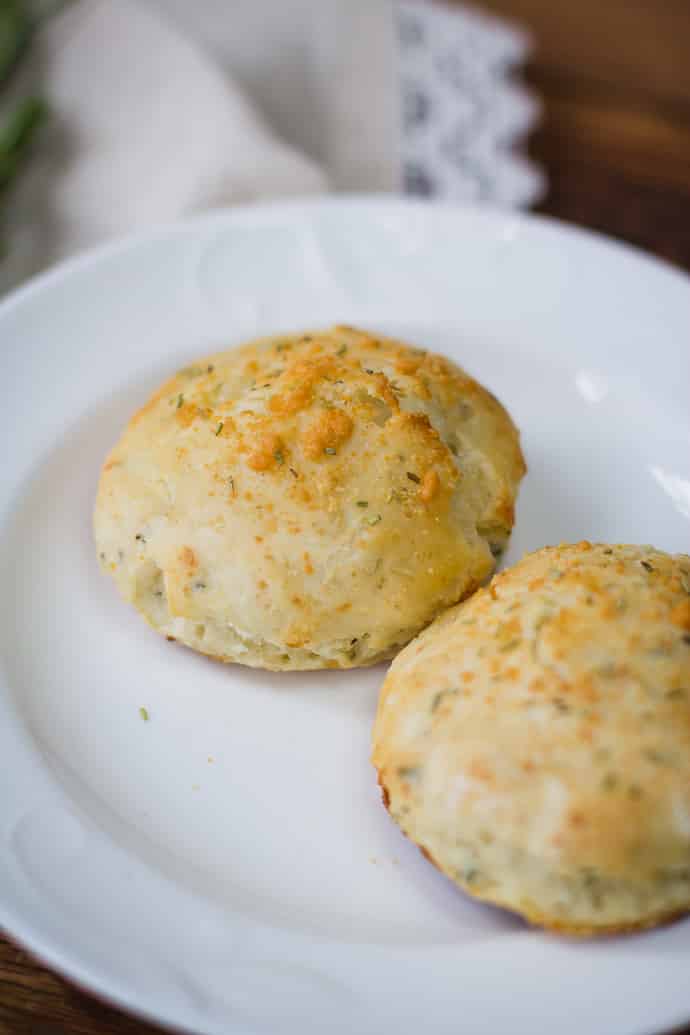 And I’m not typically a fan of salt + sweet together but (I feel like I say that quite often these days) BUT these biscuits taste SO good drizzled with a bit of honey. Just trust me and try it. 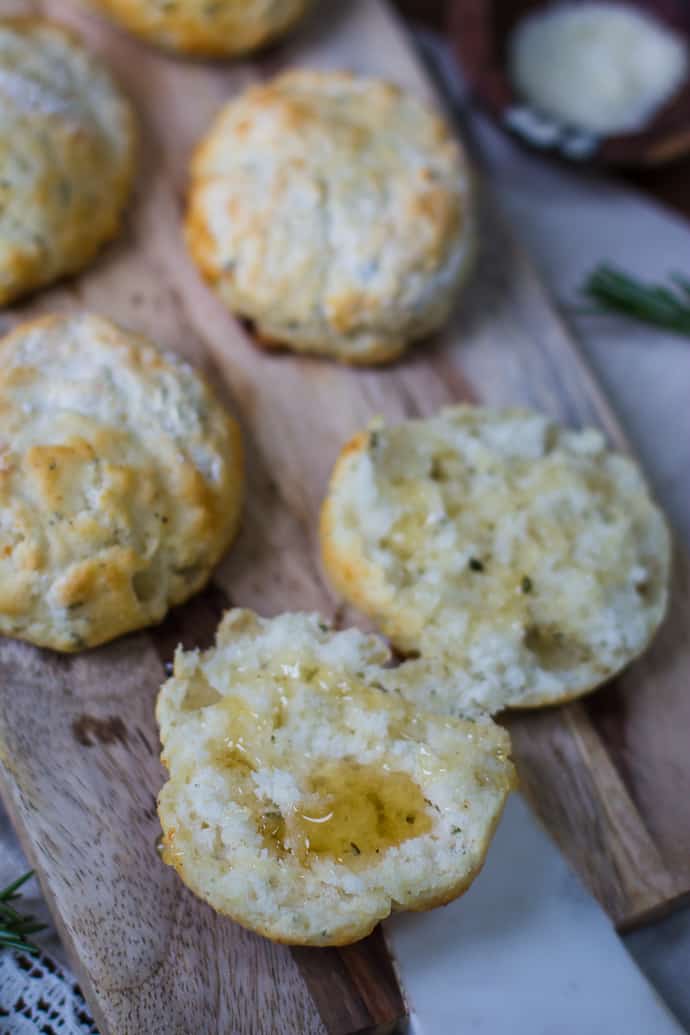 I hope you have a lovely week, friends. So far, mine is off to a good start. 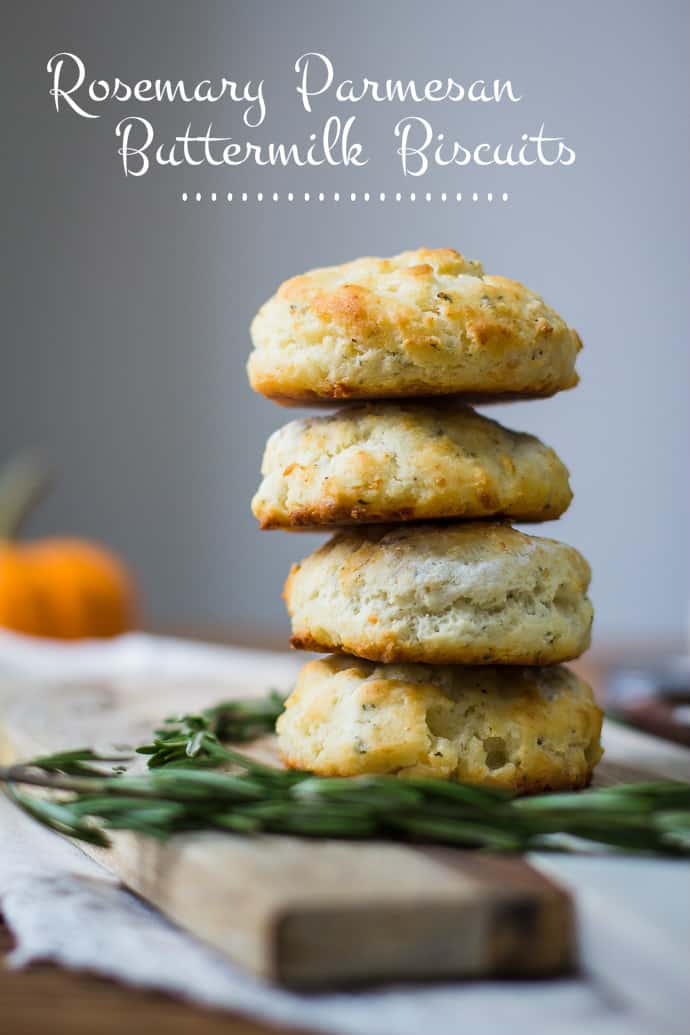