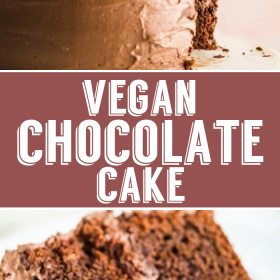 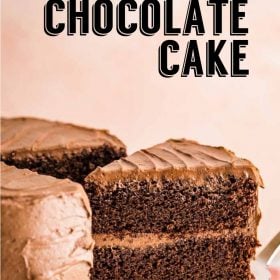 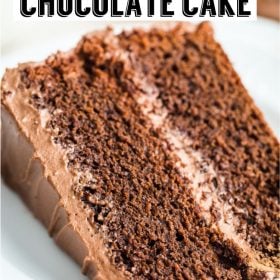 You can make this beginner level FLUFFY Vegan Chocolate Cake right at home and no one will even know it’s vegan! It’s made in one bowl bowl with simple and easy to find ingredients. Even my non-vegan friends love this recipe!

The Vegan Chocolate Cake I’ve been talking about on Instagram for WEEKS is FINALLY HERE. If you watch my insta stories at all then you’ll know that I’ve been testing this recipe for a couple of months. I’m happy to say that I have perfected it and it’s sooooo goooood.

This cake is decadent and fluffy while being a bit dense (the way that I prefer my chocolate cake) and the frosting is creamy and delicious!

My goal when making vegan desserts is to keep them as close to the original recipe as possible. While I like a healthier dessert, I always like to offer a variation that’s simple and classic. Maybe we’ll make a healthy vegan chocolate cake in the near future.

BUT FOR NOW, you’re stuck with this RICH chocolate cake that I promise will not disappoint. Seriously the best vegan chocolate cake ever (and I’ve tried quite a few of them).

If you’re looking for a good eggless chocolate cake recipe, this one is your girl!

How to make this vegan chocolate cake recipe:

This whole chocolate cake comes together in one big bowl and I LOVE IT for that.

The apple cider vinegar and milk are stirred together and left to sit.

Then the dry ingredients are stirred together before all of the wet ingredients are added in and mixed together. I’ve found that the cake turns out best if all of your ingredients, including the milk and applesauce, are at room temperature.

The batter is poured evenly into 2 baking pans, I used 8×8, and baked for about 35 minutes.

That’s it! Simple, right? I always overthink baking recipes but this is pretty basic, even for a vegan desserts recipe.

Can I make this vegan chocolate cake gluten free?:

Inevitably, every time that I post a baking recipe, I always get a ton of questions from people asking how they can make the recipe gluten free. Making a gluten free vegan chocolate cake is on my to do list but so far, the only way that I have ever tried making this recipe gluten free is by using a 1-1 gluten free flour.

I’ll definitely update this post once I’ve made a gluten free version. In the meantime, here’s a delicious paleo chocolate cake that’s I’ve tried. It does have eggs in it fyi.

I plan to create a whole separate post on this vegan chocolate frosting in the near future but in the meantime, I wanted you to have the recipe now.

Just like with the cake, I wanted to keep this vegan frosting very simple and classic. So, we’re working with powdered sugar, vegan butter, cocoa powder, vanilla, and a bit of milk (whatever kind you prefer). All of the ingredients get whisked together until you have a light and fluffy chocolate frosting that’s decadent and creamy and DELICIOUS!

See how to make the easy vegan chocolate cake here:

This is THE BEST Vegan Chocolate Cake Recipe that you will ever find! It’s rich and decadent and perfect for holiday baking.