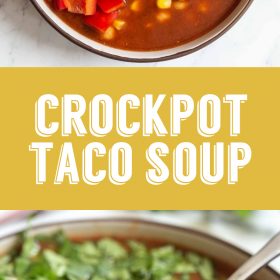 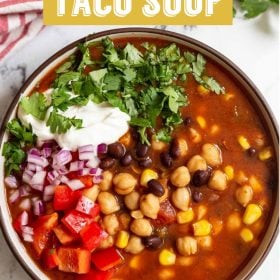 Chickpea Crockpot Taco Soup– we’ve been making a version of this slow cooker taco soup for YEARS and I love it so much. It’s great for quick and easy meals and can even be used on tacos with less liquid added it!

While I’m a FIRM believer that all year long is slow cooker season, there’s definitely something about the fall that makes me reach for my crockpot more often. And this Crockpot Taco Soup is one of my ALL TIME favorites!

I’ve actually been making a version of this soup for YEARS and wanted to vegan-ize it so here we are :)

I originally found the idea for this recipe in a random facebook thread and it was meant to be chicken tacos. A few modifications later and I’ve turned it into a DELICIOUS chickpea soup :D

If you want to make tacos out of this recipe, you can simply omit the broth completely. This will result in a super delicious taco filling that’s perfect for taco bowls and salads!

How to make this Taco Soup Recipe:

As most crockpot recipes go, this is RIDICULOUSLY easy. Like, throw all of the ingredients in, mix, and cook…EASY!

Everything but the corn gets mixed together and cooked on high for about 2 hours. Since all of the ingredients are already cooked, it’s really just a matter of giving all of the flavors time to blend.

See how to make the Crockpot Taco Soup here: