Loaded Veggie Breakfast Hash– this easy breakfast hash is loaded with veggies and comes together all in one big pan. It’s easily customizable so you can use what you have on hand and make something everyone will LOVE! 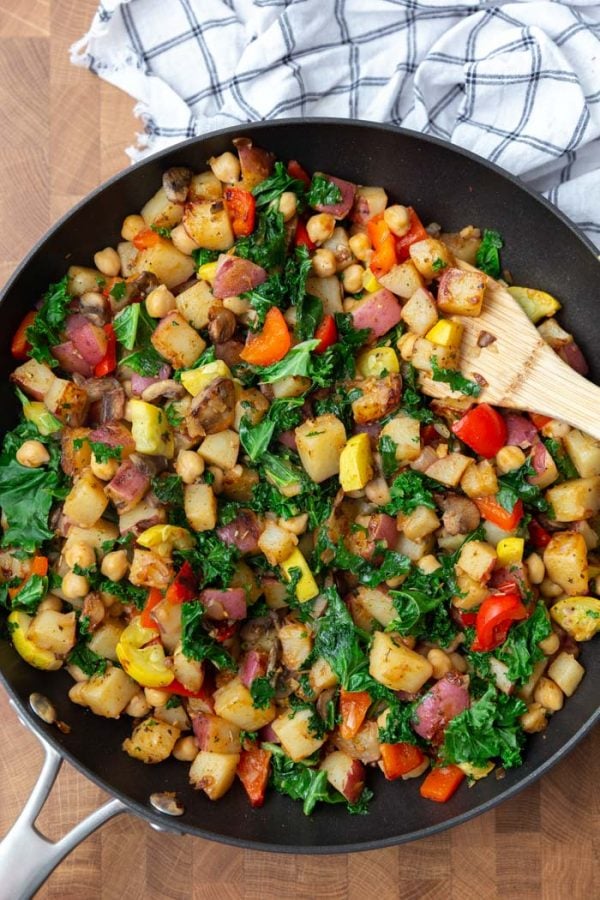 Today I’m teaming up with Calphalon to share a bit about their new Calphalon® Contemporary SharpIN™ Nonstick 13-Piece Cutlery Set. It’s a pretty amazing set and if you’re in the market for new knives, I highly suggest these!

The TWO most annoying things to me when it comes to cutlery: 1) when my knife isn’t sharp enough to properly cut and 2) when the food constantly sticks to the knife. GAH so annoying! Luckily, Calphalon solved BOTH of these problems with their new cutlery set. The knife block has built in “SharpIN™ technology” that sharpens the knifes for you every time you remove and replace a knife. 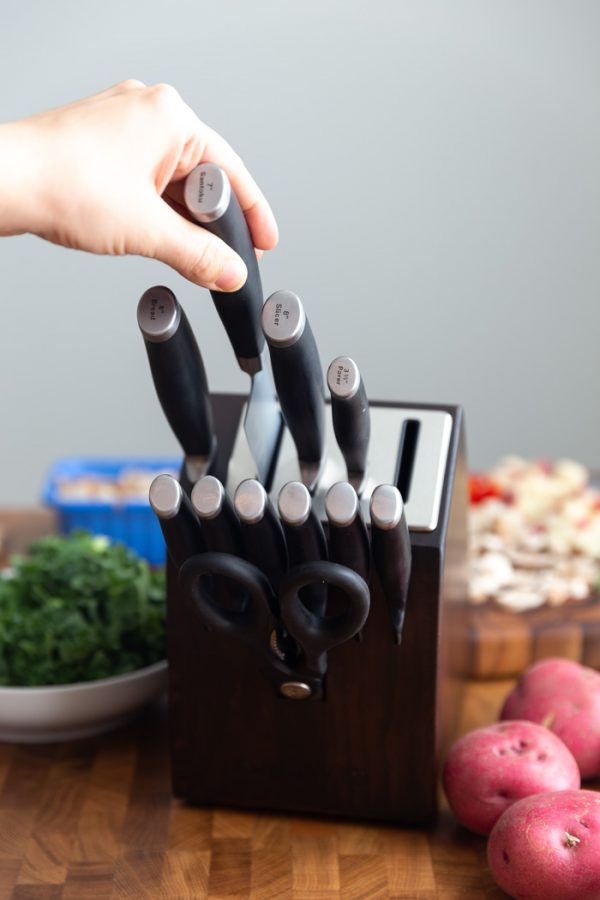 I get asked quite often which chef knife is my favorite and my answer is always the same: A SHARP knife. This Calphalon set has got you COVERED so that you’ll always have a sharp knife ready for whatever the kitchen might bring you. 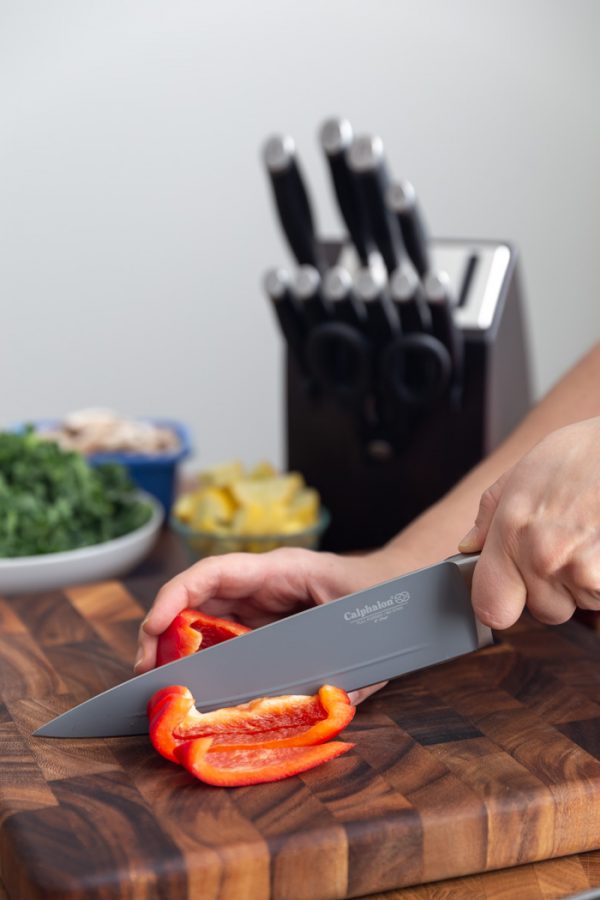 My second problem is solved by a handy little ridge that’s on the side of the knife which prevents food from sticking to the side as you’re chopping and slicing. LOVE! I wish I had these knives a LONG time ago!

And for reference- I’m also using a 10-inch Calphalon frying pan which is part of their Classic non-stick cookware collection! 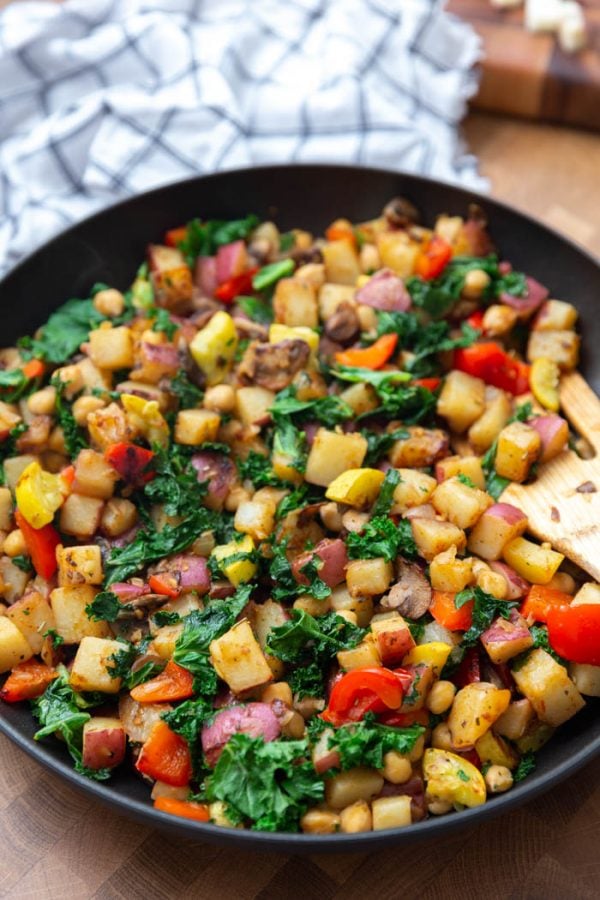 The most difficult part of this recipe (which really isn’t that hard) is simply chopping all of the veggies. It’s a hefty amount of chopping. But once that’s done, the whole recipe comes together in one large pan. EASY.

Since they’re being cooked first, I like to start with the potatoes and then chop the remaining veggies while the potatoes are cooking. 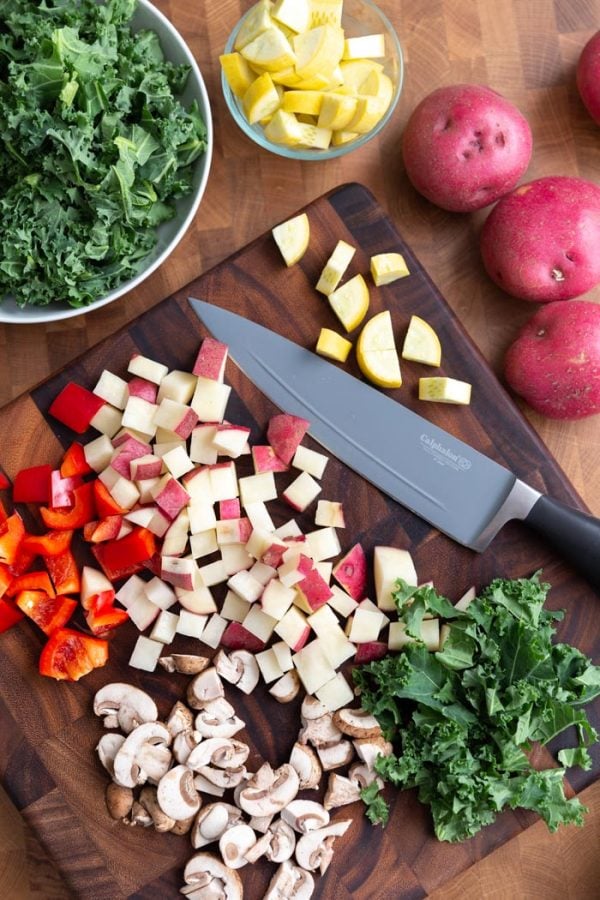 One of my favorite parts about this recipe is that it’s easily adjustable. You could swap the potatoes for sweet potato or even something like butternut squash. The other veggies could all be interchanged with anything that you happen to have on hand. It’s a great way to use up random stuff in your fridge before it goes bad.

Since they take the longest, I first cook the potatoes for about 8 minutes before adding any of the other veggies in. Once the potatoes are browned a bit and starting to soften, the mushrooms, onion, peppers, spices and squash are then added in to cook for another 5 minutes. At the end, the kale and chickpeas are added in so that they can get heated through and so that the kale can wilt a bit.

And that’s about it! SUPER easy and, again, I love how versatile the recipe is! 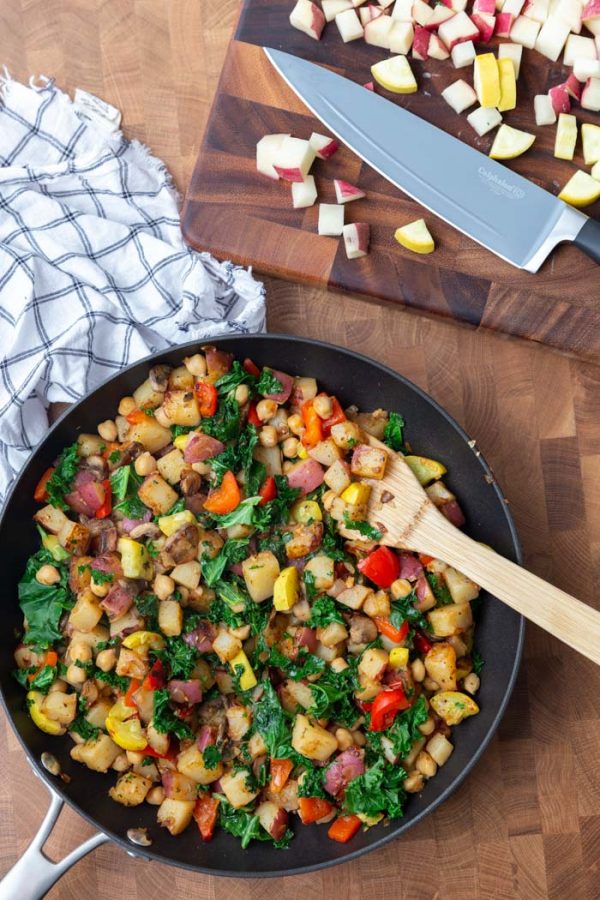 That’s it for today! Don’t forget to check out Calphalon’s Nonstick Cutlery HERE! And if you end up making this recipe, please snap a pic and tag me on Instagram @foodwithfeeling !

This post has been sponsored by Calphalon! Thank you SO MUCH for supporting the brands that make Food with Feeling possible!

Easy and delicious Breakfast Hash that comes together in just one big pan!