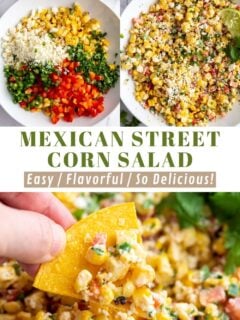 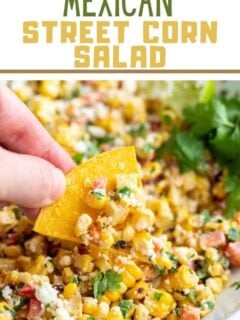 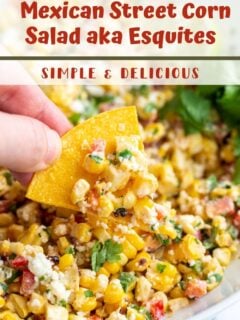 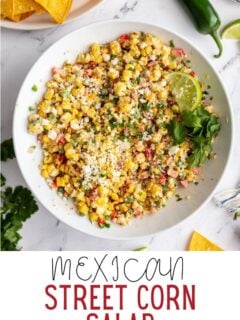 This Mexican Street Corn Salad, also known as Esquites, is so very simple to make and such a delicious summer side dish! It’s my take on the original recipe and one that I know you’re going to absolutely fall in love with!

My Mexican Street Corn recipe is one of THE most popular recipes on my blog, week after week. And as the summer is drawing near, even more people have been making it.

So, I figured that it was finally time to share my OFF THE COB version of it! IT’S SO GOOD and maybe I even like it better than the original!? I dunno, they’re both VERY great :D

Difference between Elotes and Esquites?

“Elote” quite simply means ‘corn on the cob’ in Spanish and it’s a term often used to refer to Mexican Street Corn that is served ON the cobb. It’s either on a stick or eaten by holding on to the still attached knob of the corn.

“Equites”, on the other hand, refers to the same dish OFF of the cob and is most often served on the street out of little cups. Many people refer to it as little corn cups.

In my case, the recipes are VERY similar except that one is on the cob and one is off. For this particular “salad” I added in bell pepper and jalapeno which is not traditional to Mexican Street Corn but still VERY delicious! As desired, you could totally leave out the extra veggies for a more authentic dish!

I really really love making this with freshly grilled corn HOWEVER, you could most certainly just use canned corn making the whole thing so much easier to make. If you’re doing that, I highly suggest getting fire-roasted canned corn if you can find it.

Ingredients for this Street Corn Salad:

How to make this corn salad:

1) Make the sauce by whisking together all of the ingredients

3) Place the corn in a large bowl along with the bell pepper, jalapeno, cilantro, and cotija cheese.

4) The the sauce over the veggies and toss to combine

AND that’s it! Garnish with additional cheese and cilantro and ENJOY!

As usual, if you end up making this recipe, please come back and let me know how you like it. Or tag me on Instagram @foodwithfeeling! I always love to see what y’all are cooking from the blog.

This Mexican Street Corn Salad, also known as Esquites, is SO simple to make and SUCH a delicious summer side dish!

For the corn: you can also use 2 cans of corn to make the recipe a little easier. I suggest getting “fire-roasted” canned corn if you can find it!

To cook the corn: You can also make this by cooking the corn in the oven. Preheat the oven to 425 degrees. Lightly spray the husked corn on the cob with cooking spray and wrap in foil individually. Roast for 20-25 minutes

To make this VEGAN: to make this vegan simply swap the mayo and sour cream for vegan versions. For the cheese, I highly suggest using a vegan feta. I’ve made this recipe with Violife’s crumbled feta and it’s SO GOOD!