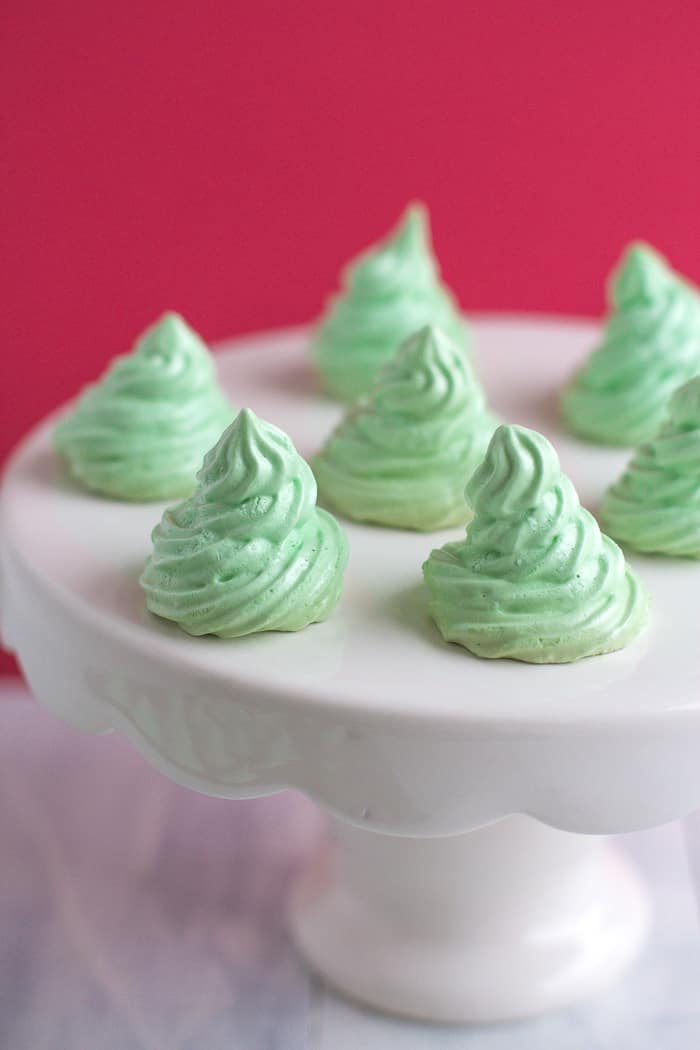 I have TWO announcements before we get started with lots of meringue goodness: 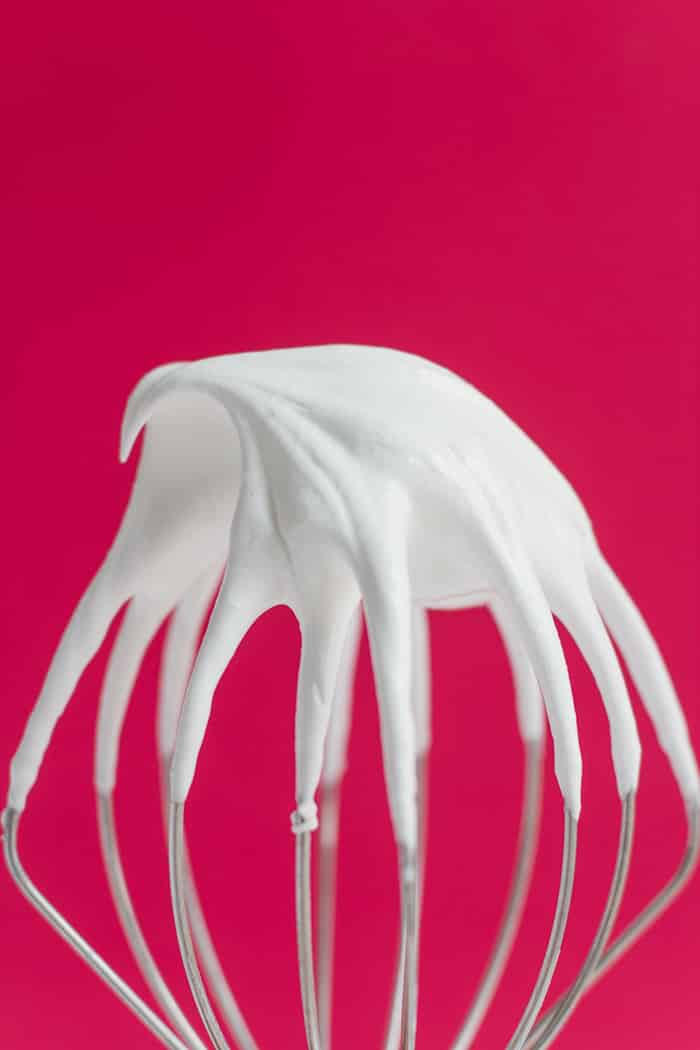 The ONLY plan for the day is gift exchanging between me and Stephen  AND cooking. I planned a somewhat ambitious dinner menu that includes a lot of things that I’ve never cooked before such as prime rib and creme brulee. I will no doubt report back on how that goes.

To back track just a little: the reason that we will be all on our lonesome on Christmas Day is because 1) My mom and brother are leaving on Christmas morning to go to Las Vegas just because they both really like Las Vegas. I was invited but decided that I would rather utilize that time to finally decorate my house a little and hang some stuff on the walls (and paint every single room). 2) Stephen’s parents left a couple days ago for England and will be spending Christmas with his mother’s side of the family in Cornwall 3) See note above about my extreme introvert-ness (is that a word?).

This is the first year in my whole life that I’ve had nothing to do on Christmas day. Growing up I always woke up at my moms house and then at some point during the day made the 1.5 hour treck to my dads house for christmas presents round dos. I also figure that this is the last year that we’ll have zero plans and no one to see on this day for at least another 28 years.

Okay AND, on to the Mint Christmas Meringues. 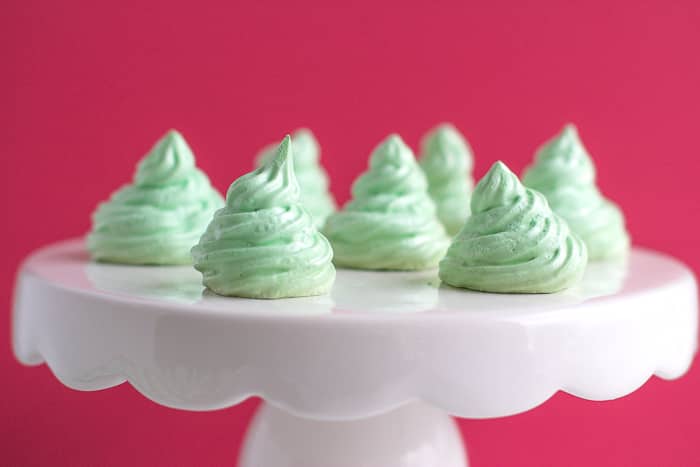 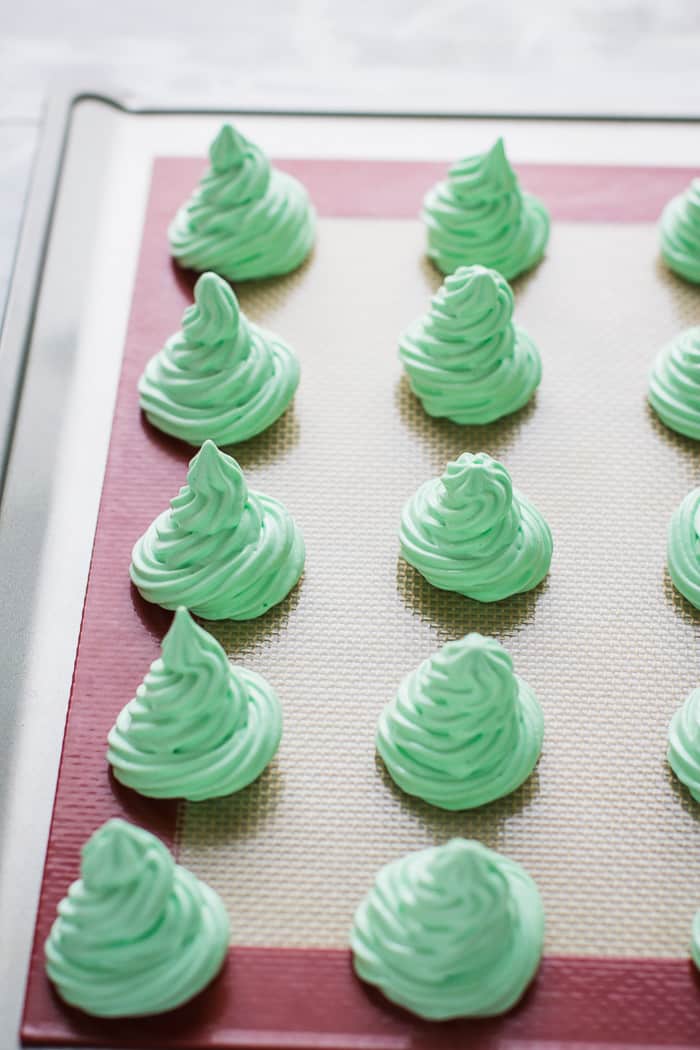 I’ve been perfecting my meringue recipe for quite some time now. I’ve burned them, under cooked them, not whipped them to the proper “hard-peak”-ness. I’m proud to say that I am now a meringue making expert(ish). I also have an endless supply of eggs so I never have an excuse not to make meringues. :)

We start by whisking the egg whites until they get nice and frothy. 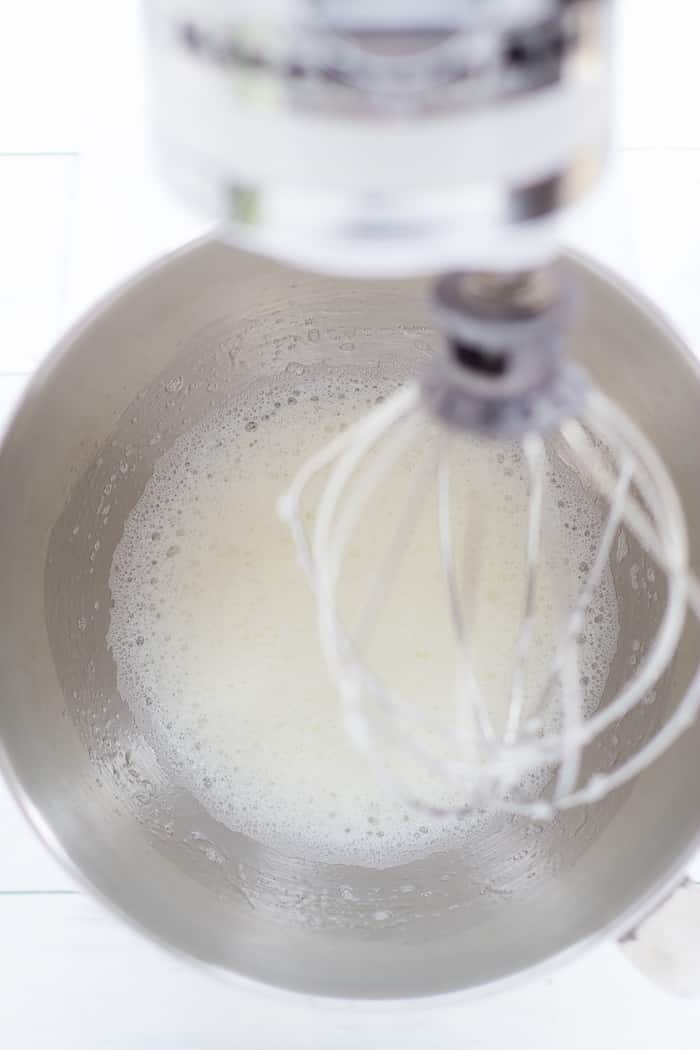 At this point, the cream of tartar is whisked in. Not all meringue recipes call for it but I’ve found that it’s absolutely essential for perfect fluffy and well formed meringues.

This is beaten until soft peaks form. The peaks will stand up and yet are droopy. Something like this: 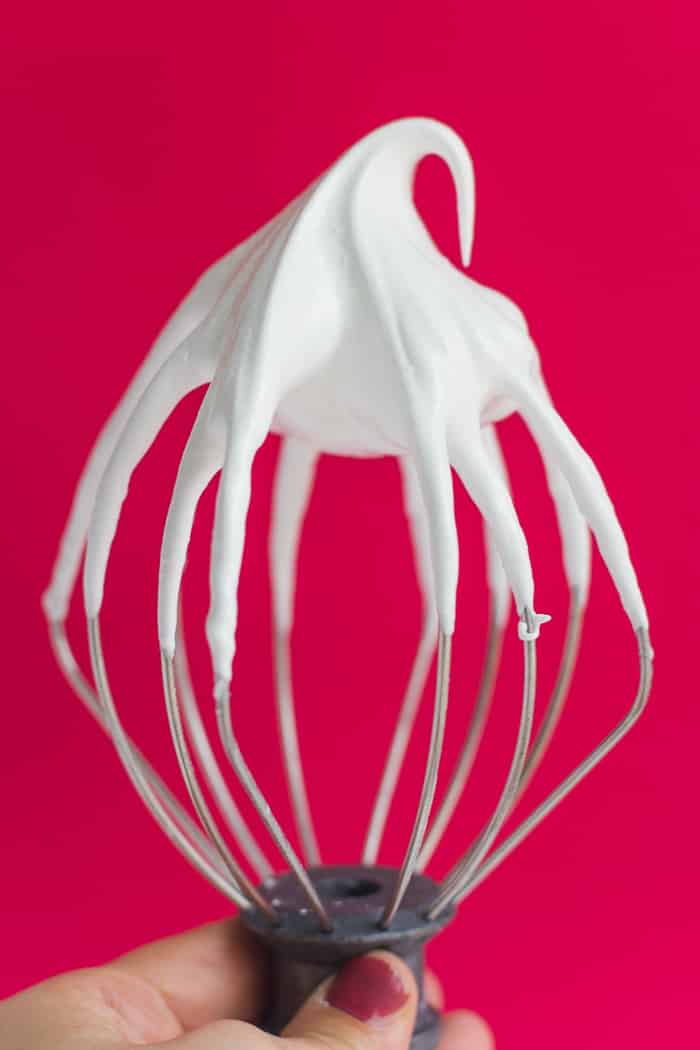 At this point, the sugar is beaten in. One tablespoon at a time until stiff peaks form. Even in a stand mixer this can take a while. Mine seem to take ~10 minutes.

This is what it looks like when the peaks are almost stiff….but not quite yet. There’s still a bit of a droop in the peak. 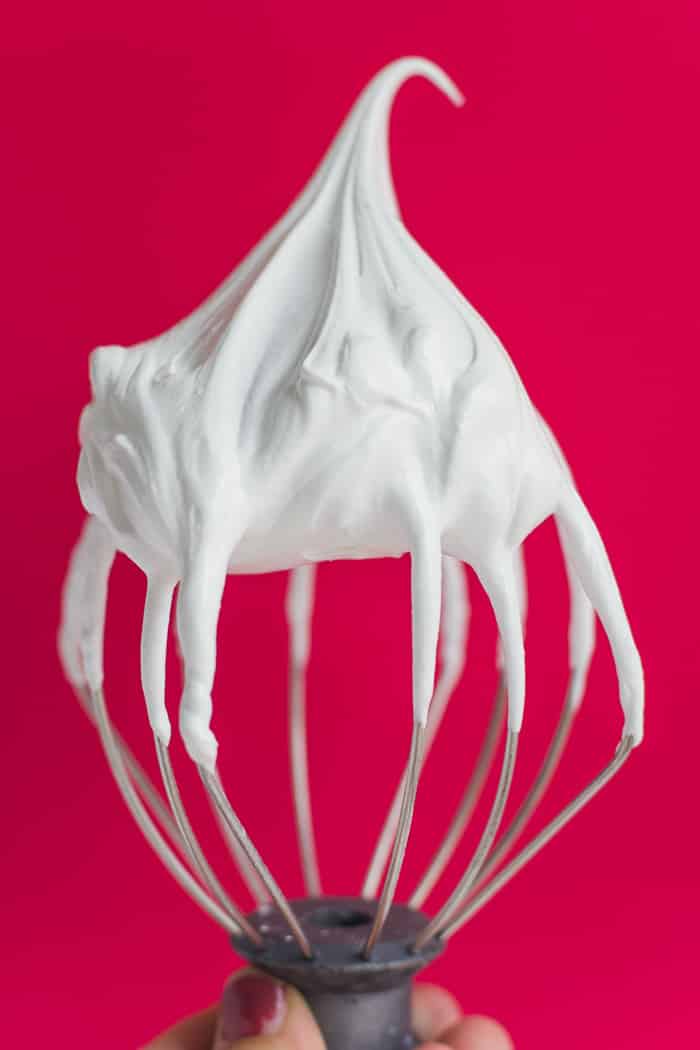 AND this is what nicely stiff peaks look like. NO droop at all: 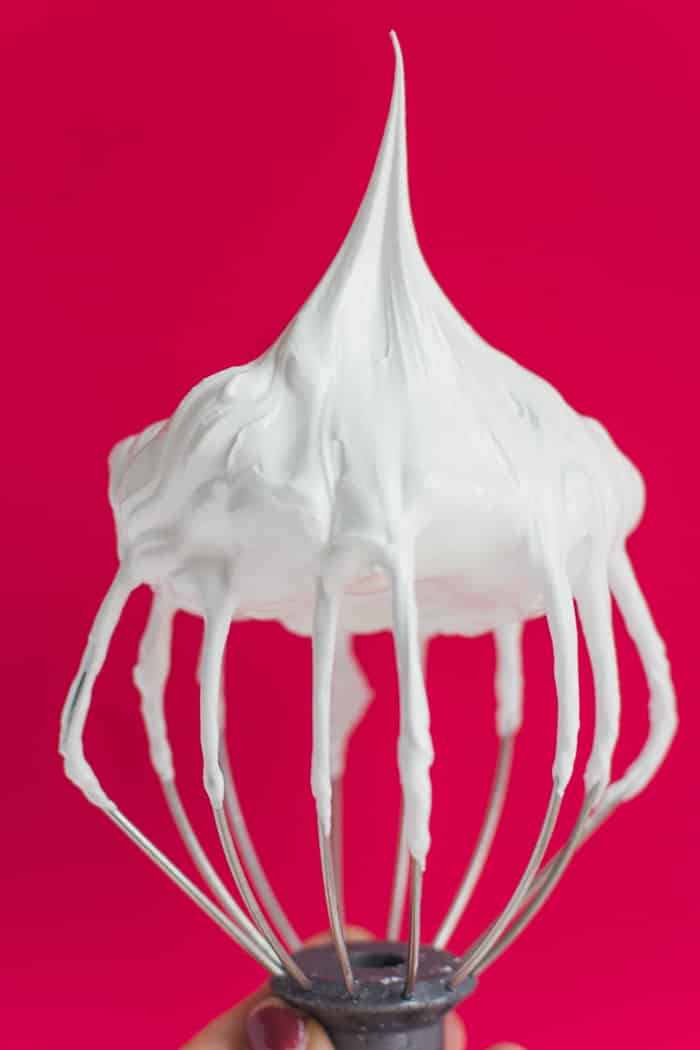 Now, typically I would have beaten the food coloring around the same time that the sugar was mixed in but I didn’t just to show you the process with and without it. 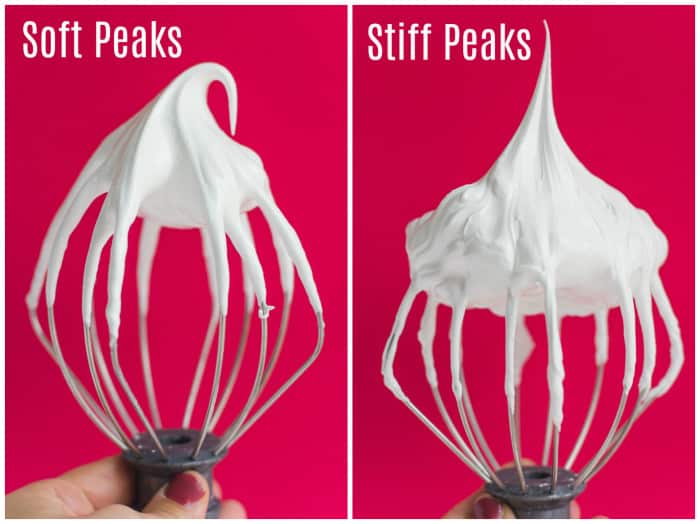 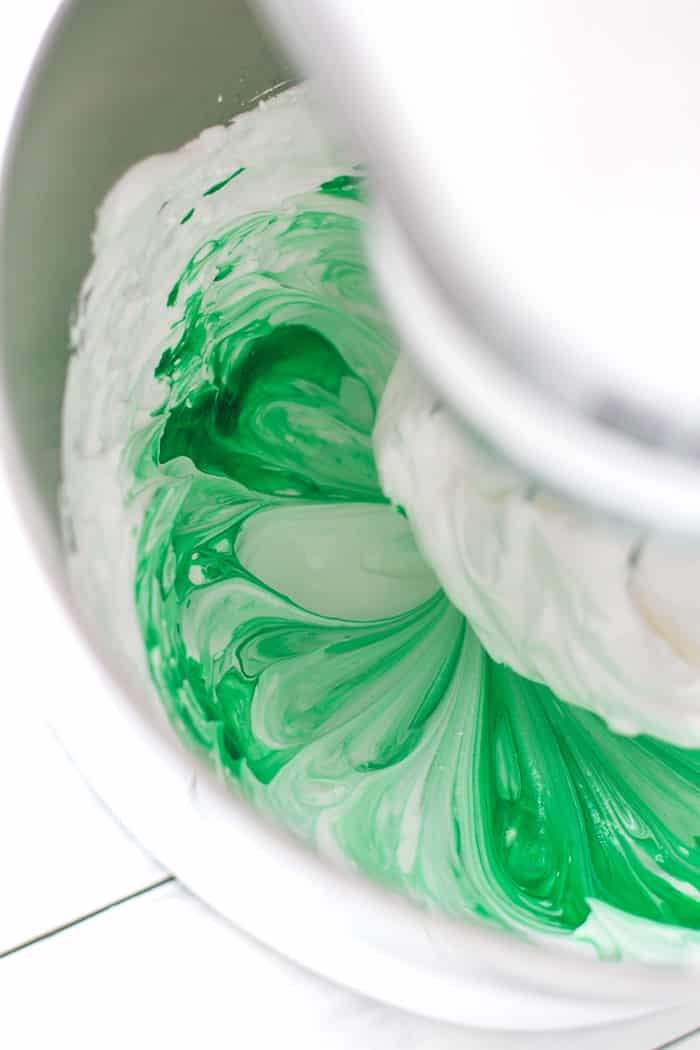 I then scooped it all into a piping bag but if you don’t have those, you can easily use a plastic baggy. You WILL however need  a star tip for this to really work. THESE are the ones that I have.

The meringues are then piped onto a baking sheet. I did this 2 different ways to test it out. 1) I piped three dollops of the meringue, one on top of the other like building blocks and 2) I did a simple spiral motion starting at the base and getting smaller as I came up. I found that #2 works much better and results in prettier Christmas Tree like meringues. 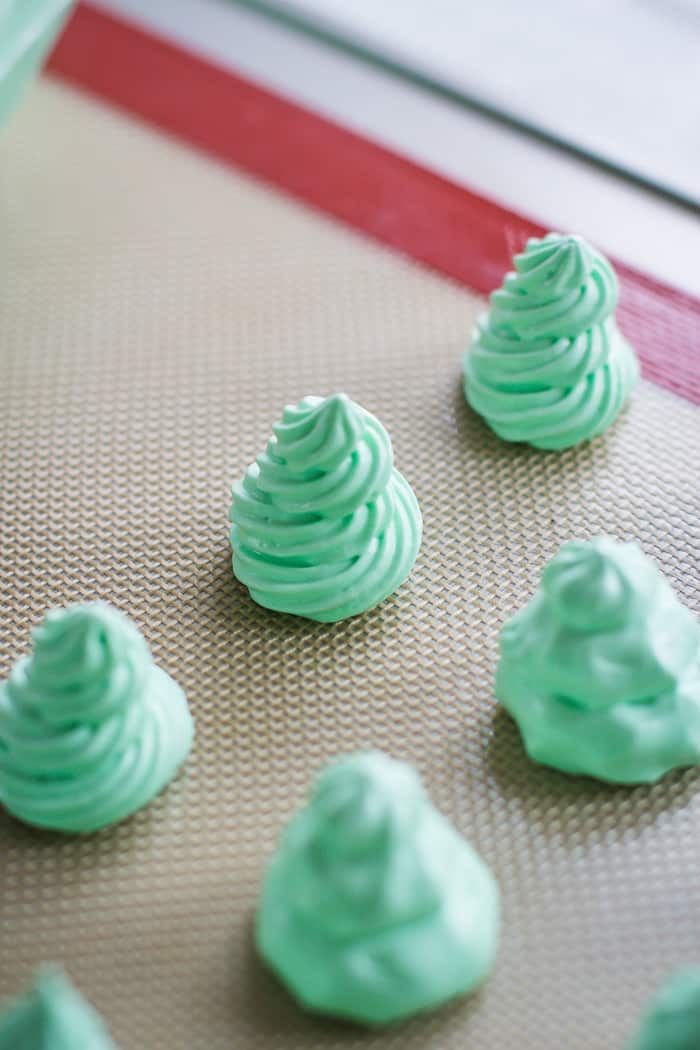 They then bake for 80 minutes on a low heat. I found that mine were perfectly done at the point that they were JUST starting to brown on the bottom. Like, the tiniest bit of brownness.

Once done, the oven is turned off but the meringues are left in the oven with the door propped open until they’re completely cooled off. 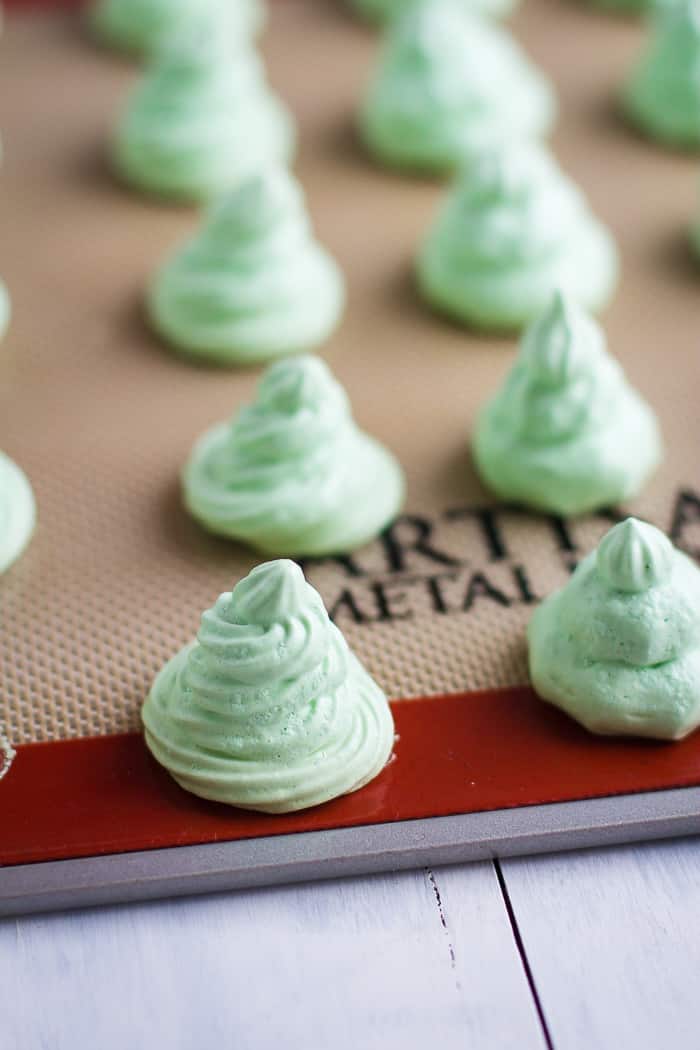 And that’s it! Meringues don’t have to be scary (says me to my past self). It’s really just a matter of PATIENCE. You can do it! :) 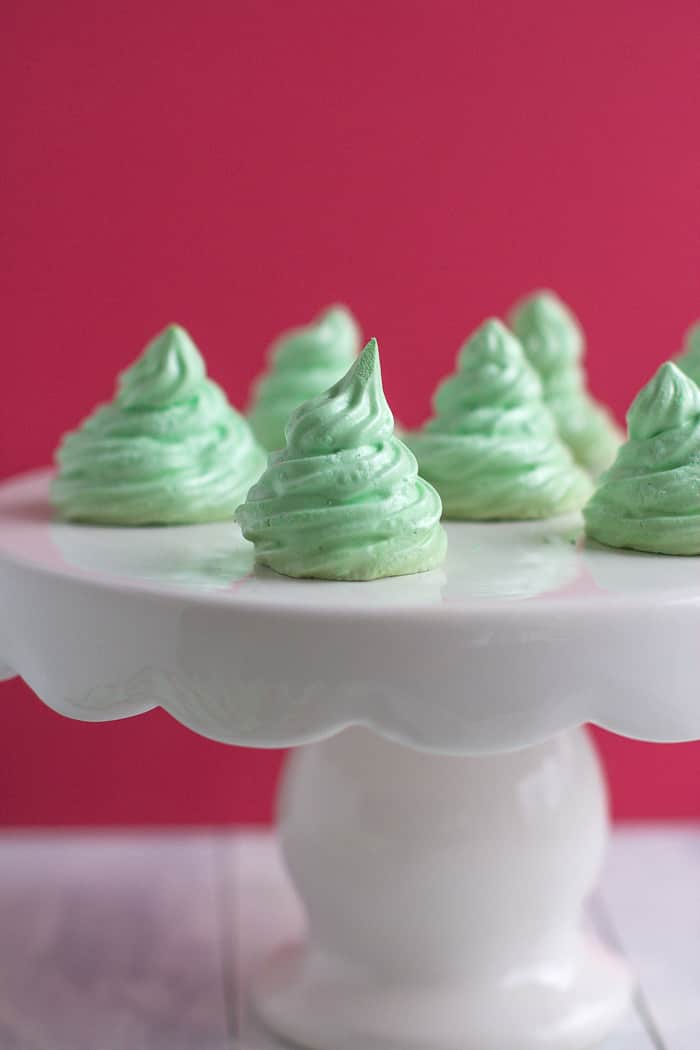 Anddddd that’s all for today. I’ll be back tomorrow with (you guessed it) more holiday recipes.