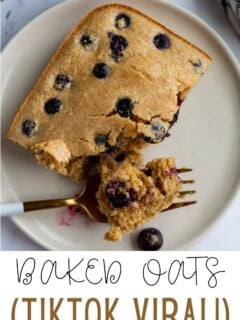 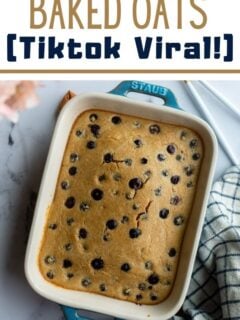 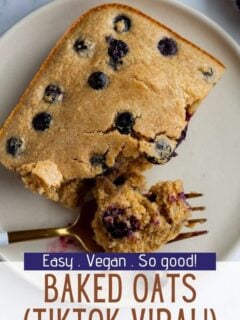 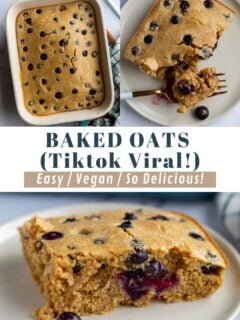 These Baked Oats went viral on Tiktok and for very good reason! They’re SUPER easy to make, a delicious breakfast, and kind of just tastes like cake!

Have you seen these #BakedOats trending on social media lately? As most of these things do, it started out as a trend on tiktok and quickly spread.

But this isn’t your average oatmeal bake where you mix oats with liquid and some other ingredients and then bake it. Instead for this recipe, we’re BLENDING everything together. So, instead of oats you basically end up with oat FLOUR and the end result is something more like CAKE then oatmeal and I LOVE IT for that!

The first video that I saw sharing these baked oats had NO recipe with it (just someone making it but no way of knowing what they were actually putting into them). SO, I figured that I would try making my own version of it and here’s how it turned out:

I haven’t posted *that much* to Tiktok yet but that video is my highest viewed video with 700k views in just 48 hours!

Since people loved it so much and had so many questions about the recipe, I posted another version of it. I figured it would be easiest if I wrote both of the recipes down in an easy to find place for you :)

As I mentioned, I created 2 different versions of the recipe. One version is very closely modeled after THESE Oat Flour Muffins while the other version of the oats using eggs instead of banana (because SO many people were asking about that).

Here are the main ingredients in the banana version (which is my favorite!):

This will depend largely on which version that you make.

The vegan version tastes a lot better to me and I much prefer that one! It has a texture very similar to cake that’s a little softer (as you’d expect from oatmeal). It’s sweet and delicious!

While also very yummy, the egg version of the Baked Oats is much denser and kind of spongey. It rises a little more than the vegan version.

As usual, PLEASE let me know if you make this recipe and let me know how you like it! You can come back here and leave a comment or tag me on instagram (@foodwithfeeling).

These Baked Oats went viral on Tiktok and for very good reason! They’re SUPER easy to make, a delicious breakfast, and kind of just tastes like cake!

For the vegan version:

For the egg version:

For the vegan version: 4 servings. Each serving is 234 calories.