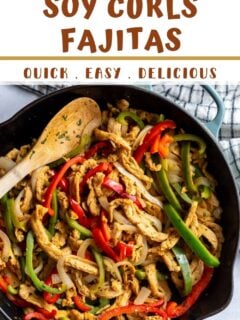 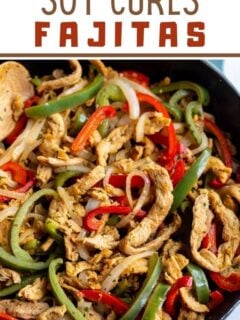 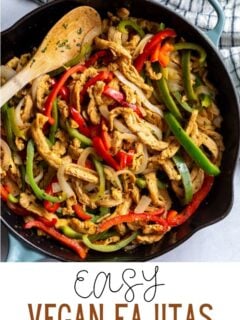 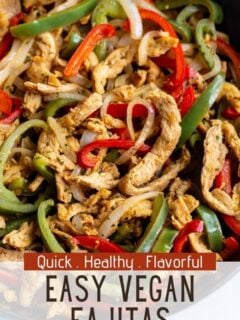 Whether you’re brand new to cooking with soy curls or you’re a seasoned pro, I know that you’re going to love these flavorful Soy Curls Fajitas! They comes together just like traditional fajitas, very quickly, but with soy curls instead of chicken or steak.

Have you ever tried soy curls before!? They’re so underrated and I’m excited to be cooking with them more. They’re widely available in the Portland, Oregon area so ever since we moved here, I’ve had so much fun with them.

I was first introduced to soy curls by Caitlin from From My Bowl. She has several DELICIOUS soy curls recipes like this Vegan Sesame “Chicken” and this Vegan “Beef” & Broccoli.

But before we dive into the recipe….

What are Soy Curls?

Soy curls are exactly what they sound like, curls of SOY. They have just ONE ingredient in them: “textured whole soy beans”. I love them for being so simple!

The texture and look is weirdly similar to chicken although they are softer and a bit chewier. They’re easy to cook with and work well to absorb different flavors making them very versatile.

One of the other things that is great about soy curls is that they are store at room temperature and will last in your pantry for quite a while (mine had an expiration date about 6 months after the date that I bought them). SO, if you can get your hands on them, I suggest picking up a few packs and keeping them on hand for easy dinners!

How much protein in soy curls?

Soy curls are relatively high in protein and contain 11g of protein per serving. It’s a great protein source and meat substitute!

When you buy soy curls, they are dried and kind of resemble a thick potato chip.

Before you cook them, you need to re-hydrate them. The package has you do this in about 3 cups of very hot water. However, we’re going to use a fajita marinade of sorts. We’re going to rehydrate them AND marinate them at the same time!

To do this, you simply add the soy curls to a large bowl and then mix in the broth, lime and orange juice, plus all of the spices and flavorings. Let it sit for about 10 minutes and that’s it!

Once done, gently squeeze the excess moisture from the soy curls and you’re ready to cook with them! The

While the soy curls are marinating, I sautee the veggies and then set them aside. Then you add the soy curls into the same skillet and cook them for just about 5 minutes so that they can get a little brown on all of the edges. Add the veggies back in ENJOY!

So simple but seriously SO GOOD!

I really can’t wait to hear what you think of the soy curls and this recipe! Snap a quick photo and tag me on Instagram @foodwithfeeling! OR come back here to leave a comment.

See how to make the Vegan Fajitas here:

These Soy Curl Fajitas are simple to make and packed with plant based protein!

For the Soy Curls:

*I believe that this could even marinate overnight but I have not tried that.